Tuesday March 14, 2017: Lulu and Laura ask Kevin for a favor, Sonny goes looking for Rudge, and Liz worries to Franco about what Helena did to Jake. 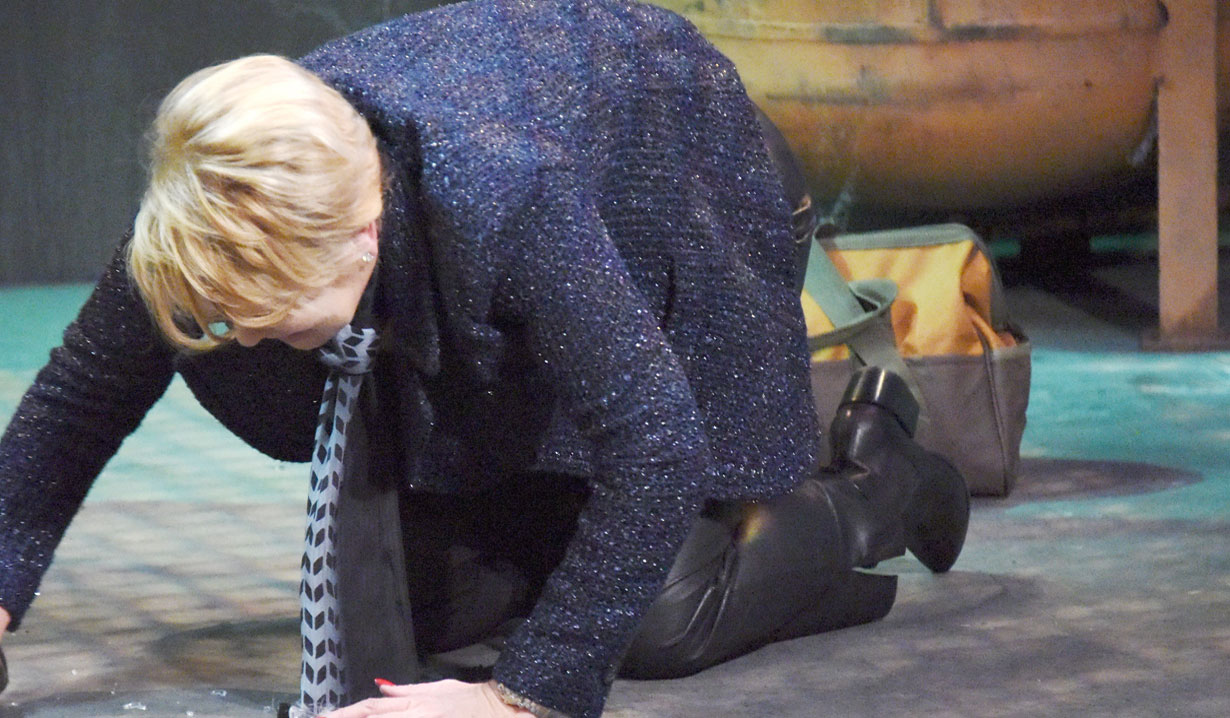 Lulu is moping about the custody hearing with her mother at The Floating Rib. They wish Laura’s talk with Nina had worked. Kevin stumbles in, fresh from evacuating the psych ward. Laura question him about Charlotte’s psych evaluation. Lulu wants him to do it. He can’t do that. Laura asks him to look into who is doing the evaluation. He can’t do that either. Lulu begs and worries about how much Charlotte hates her. Kevin is sure a therapist can see beyond that. Once Lulu exits, Laura asks Kevin what the likely outcome of the case will be. He thinks it could go either way.

Franco and Liz go to her place. She’s eager to check on the boys. He only feels okay when he’s with her. As they kiss, they notice Jake is watching. The kid asks what happened. Liz assures him everything is fine and shows him a picture of his new sister. “I don’t think she’s cursed,” he says. They assure him that Helena’s curse is not real. He spaces out and says, “Never forget, Jake. Never tell.” They question him but he wants to go back to bed. After he’s gone up, Liz opens the book Helena left her of “Jake’s Adventure.” She’s sure her son hasn’t seen it, even though he just quoted it. Liz wonders what Helena did to her son. They recall what’s happened to him since he came back but worry he might have suffered a terrible trauma. He suggests that he do more art therapy with him to unlock what happened, but worries about how Jason might react. She doesn’t think he should know.

Sonny corners Curtis in the hospital hall with a request. He quizzes him about Liv and Rudge. Curtis gives him a photo and leaves. Sonny calls Max and gives some orders. Meanwhile, Andre tracks down Jordan to check on her. He misses her and their break-up still hurts. He’d like to be her friend. Curtis wanders over as she leaves to take a call. Andre thanks Curtis for defusing the bomb but he still doesn’t like him. Curtis assures him there is no romance between him and the commissioner. Andre doesn’t buy it.

At the penthouse, Ava calls Sonny and leaves a message, begging him to let her see Avery. Jordan shows up and begins asking questions about her sister. Ava admits her brother and sister were there and tells her about being tied up. Jordan wonders why she didn’t call the cops. That sounds pretty rich to Ava.

Liv is on the bridge, having just taken a shot at her brother in the water. Rudge jogs up and she gloats about being done her work. She orders him to prepare the boat while she rights one last wrong and corrects her past.

Carly returns to Morgan’s grave to tell him who killed him. She’ll never get over his death and wants revenge. That makes her sound like Sonny. She sobs and stands up. As she turns around, she bumps into Liv with the plaque from her grave. Carly recognizes her and calls her a monster. Liv waves it off and Carly accuses her of killing her son. Jerome whips out a gun and they struggle over it. It goes off and shoots Liv in the arm. Carly points the gun at her and Liv starts apologizing, blaming everything on her brother. Carly is determined to ‘balance the scales’. Liv begs but Carly wants to pull the trigger.

Sonny tracks Rudge down on the bridge and levels a gun at him. Rudge tells him the little he knows.

Sonny must make a hard choice.