Monday March 13, 2017: Curtis helps Jason in an explosive situation, Carly learns who was responsible for Morgan’s death, and Finn agrees to clean up. 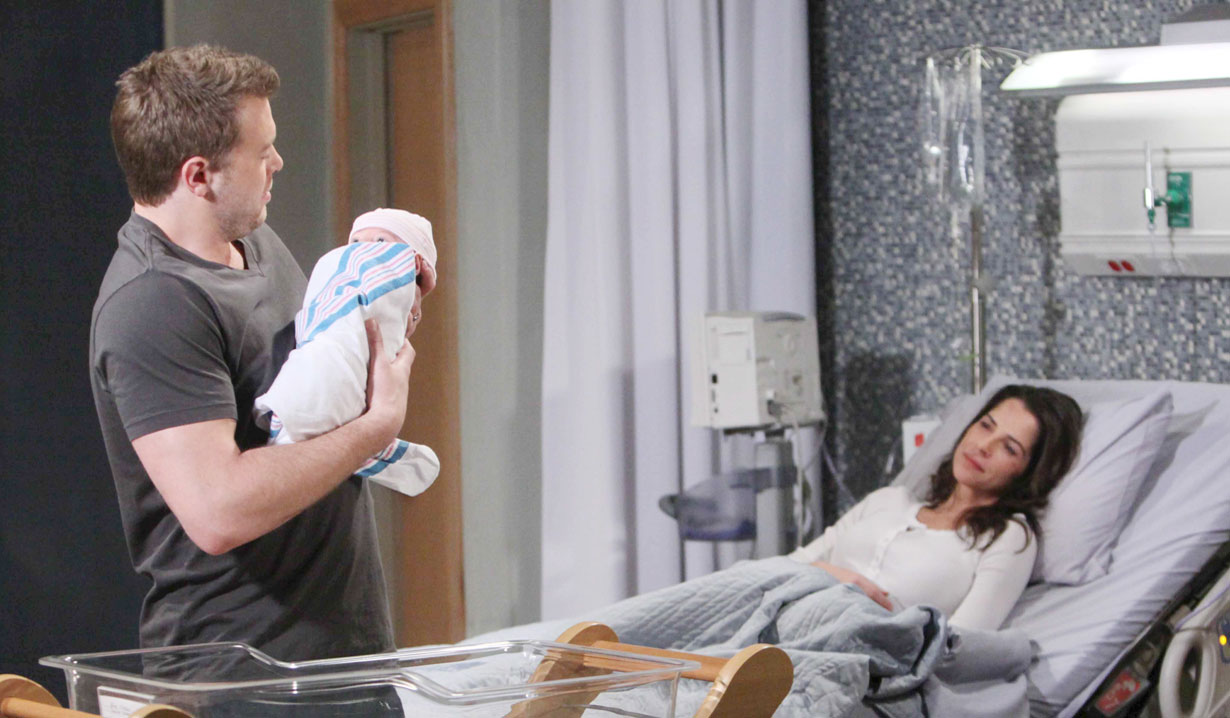 Julian and Ava are at the penthouse when their sister calls. Liv explains she’s got someone more valuable to him than Ava – Alexis. He takes off and loads his gun.

Sonny visits Morgan’s grave to tell him his killer will be brought to justice. He admits that he did something stupid and lost Carly again. She walks over but decides to leave. Sonny starts asking for forgiveness. She doesn’t care about Nelle at the moment. She’s busy grieving for her son and feels empty inside. Though she’s forgiven Sonny for worse than his infidelity, she can’t forgive his lies. He keeps apologizing until she asks him to go. Carly apologizes to Morgan. Ava calls, asking for a visit with Avery and explaining she’s been released. That doesn’t go over well.

At the evacuated hospital, Jordan and Dante hope the bomb squad won’t run out of time. Liz strolls by and they fill her in about Jason. Down the hall in lockdown, Finn starts going into withdrawal. Hayden thinks he looks awful. He warns her that vomiting is on the way. She fetches a bucket. He’s apologetic. “My place is with you,” she says. He never ran out on her so she won’t run either. Meanwhile, Jason and Curtis are in the elevator with the bomb when the squad arrives. They hand Curtis some wire cutters and suggest what to cut. It’s hard to tell which color is which so they try blue. Outside, Sam hands her baby off to Epiphany and worries about her husband. Franco arrives and she fills him in. They argue and she taunts him about his past planting bombs. He worries about Liz. There’s an explosion. Sam freaks out. A cop calls for an update but Jason wanders out to reunite with his wife. Back inside, Hayden and Finn get the all clear. She promises again to help him kick his addiction. Down the hall, Jordan accuses Curtis of being cocky for throwing himself in harm’s way. He reminds her she was unconscious and should have her head examined. Franco runs in and embraces Liz. They soon find Hayden and Finn. The nurse offers to keep his addiction a secret if he takes a leave of absence to get clean. Franco wheels her off in a chair and Finn tells Hayden he needs to kick on his own. Across the hall, Jason and Sam settle back into her hospital room with their baby. Sonny drops by to check on them. The mobster soon admits that Carly left him. Once he’s gone, Sam and Jason hold the baby together. Meanwhile, Sonny calls his people to start searching for Liv.

More: Spoilers for all of the soaps

Carly shows up at the penthouse and rails at Ava, who explains that she’s been released because the PCPD have proof that someone else is responsible for the bomb. Jerome explains her sister is still alive. Carly is determined to find Liv and make her pay. Ava points out that Morgan’s death was unintentional but Carly doesn’t care. She picks up the glass Liv drank from and smashes it before walking out.

Liv is on the footbridge in the park. Alexis is cuffed to the rail. Her sponsor explains that she did what she did because of love. Julian soon arrives and asks her to let Alexis go. She refuses. He made her lose the love of her life and now she wants him to experience the same thing. She orders him to kill Alexis. Laughing, he claims he has no love for her. Liv doesn’t buy it. He refuses so she threatens to do it painfully. After she presses a gun into his hand, he takes a shot at Alexis’ chains. He yells at her to run and turns on his sister. Alexis runs and another shot rings out.

Curtis has doubts about what Andre is up to.

Liz worries about what Helena may have done to Jake.