GH Recap: Anna meets a roadblock as she gets closer to an answer

Wednesday February 1, 2017: Jason and Sonny don’t see eye to eye, Nina has words with Anna, and Bobbie seeks help from another. 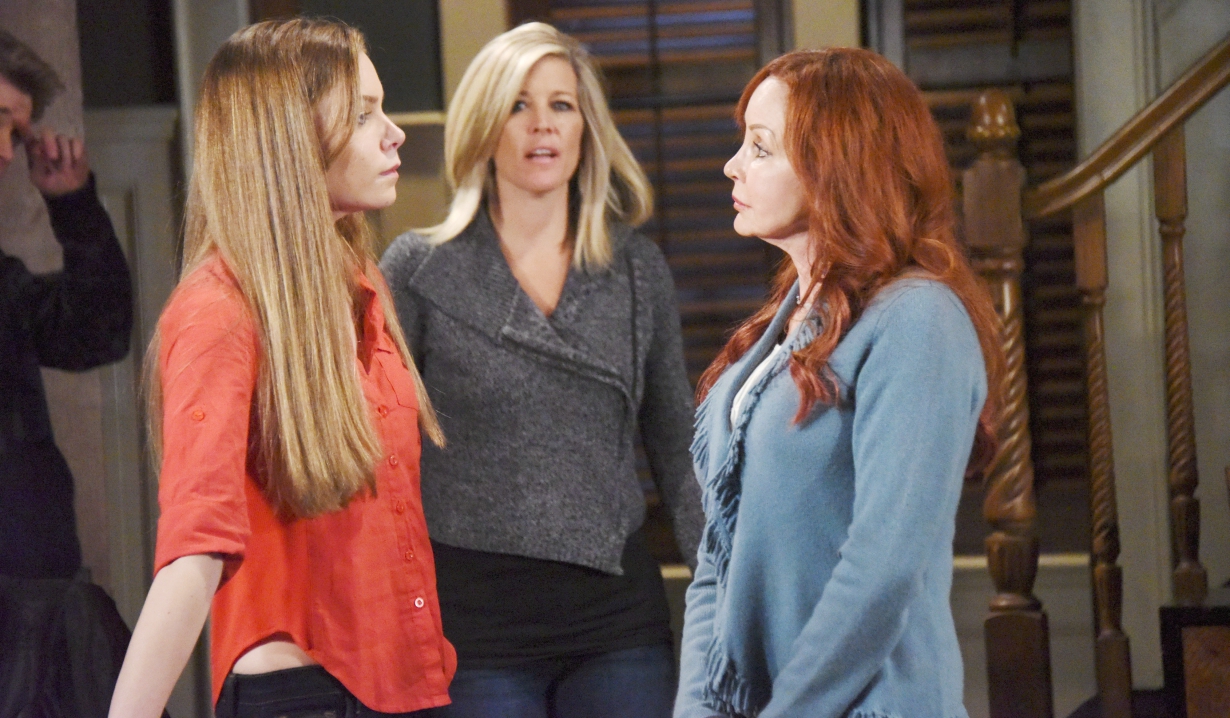 After barging in at Anna’s, Nina demands to know why she’s obsessed with Valentin. Anna’s certain it’s the other way around. While arguing, Nina sees the image of Valentin at the WSB before Anna can close it. She points out how shallow Anna is and that Valentin makes her uncomfortable because he sees the Anna Devane who’s not so beautiful after all. Anna’s left alone in tears. Later she’s studying Valentin’s cadet transcripts when “Access denied,” flashes across her screen. She calls the WSB who tells her that file doesn’t exist as her screen is wiped clean. At The Floating Rib, Lulu suggests to Valentin that they can hash things out. She admits telling Charlotte she’s her mom with the best intentions. Although the sight of him makes her sick, she knows Charlotte needs him. She’s ready to take Valentin up on his previous offer of joint custody if she, Dante, Nina and he can attend family therapy together. He declines, rescinding his previous offer. Lulu’s screaming at him when Nina arrives as Lulu declares, “When it comes between wars between the Cassadines and the Spencers, the Spencers always win.” She storms off leaving Nina to admit she saw a picture of him at Anna’s. He’s sorry but Nina’s glad. Now she understands and admires him. They kiss.

Just in! One Life to Live’s Hillary B. Smith joins General Hospital

In the park, Nelle talks to the stars while holding the rattle, hoping she has the nerve to do it. Michael finds her, claiming he’s running from Tracy and wonders what’s on Nelle’s mind. It’s the anniversary of her father’s death and points out her father’s favorite star. He shows off his knowledge of Orion the hunter but Nelle tries to leave. He apologizes before explaining Carly told him she was seeing another man. She’s sorry she didn’t mention it before but admits he’s not married, just older. She’s meeting Carly so Michael offers her a ride. Outside Sonny’s, Carly thanks Bobbie for helping sort photos for Joss’ school project. They find Sonny with an officer. Carly’s ready to get a lawyer but Sonny stops her, claiming Diane arranged for him to be taken to GH for x-rays. Carly worries but he insists it’s nothing and leaves Carly thinking something’s up. Alone, Bobbie and Carly walk down memory lane while pouring over the family albums and the past. Bobbie jokes she should have recognized Carly by her Spencer temper when she arrived in Port Charles. Carly wouldn’t change a thing, happy for the relationship they have. They hug and Bobbie offers to drop by the copy shop but Carly says Nelle’s going to do it and brushes off Bobbie’s attitude about it. Michael arrives with Nelle and sees a photo of a man holding Carly as a baby. She points out its her adopted father, Frank Vincent, who left his wife Virginia, seemingly a sad, bitter man. Nelle listens intently, and then asks if Carly ever checked up on her adopted family. Carly didn’t care what happened to Frank but remembers Virginia fondly while Nelle paces the living room. Bobbie finds Nelle alone with tears in her eyes looking at a baby picture after Michael and Carly go upstairs. She knows Bobbie’s had it out for her and snaps, “Back off!” Bobbie pushes that Nelle’s backed into a corner. Carly returns with Michael wondering if everything is alright. Nelle leaves with Carly thinking Bobbie did something. She denies it, and Michael admits Nelle’s been thinking about her family all day. He mentions he’s just friends with Nelle – she’s seeing an older man. Bobbie questions who this man is and leaves. Outside, she calls someone for a favor. She needs them to find out everything they can about Nelle Hayes. At GH, Jason hopes Sonny won’t get in trouble trying to get there wearing his ankle monitor. Sam leaves for the nurses’ station and confronts Julian asking, “What have you done?” They’re arguing when Sonny shows up with Griffin who allows him to stay with Jason while waiting for x-rays. Julian explains he wouldn’t hurt Jason as Sam leaves with Sonny. He follows them and eavesdrops outside Jason’s room. Loudly, Jason claims to Sonny that he came down with the flu. Sonny doesn’t believe it, or that he’s even sorry about Morgan. Jason exclaims he’s out…things don’t add up and nothing is worth sacrificing his family for. Sam overhears Julian being led away from Jason’s room by the nurse outside and closes the door. They pulled one over on Julian. Now they can figure out who his boss is without them knowing it. Sonny leaves them and finds Griffin, who’s more annoyed than confused about his clean x-rays. Elsewhere, Julian tells Olivia she’s scared Jason Morgan.

Back in the park, Nelle remembers the promise she made, realizing now that Carly deserves to have the world come down crashing on her.

Ned worries someone doesn’t feel the same way he does.

Carly wants Olivia to know something.

Jordan needs to talk to Andre.

Elizabeth assures Franco that she’ll stay by his side.

Jason can’t do something without knowing his family is safe.

GH Recap: Franco faces off with...