Tuesday January 31, 2017: Seth makes a confession to Liz, Alexis makes a choice, Sam and Jason make a plan, and Nina learns about Valentin's past. 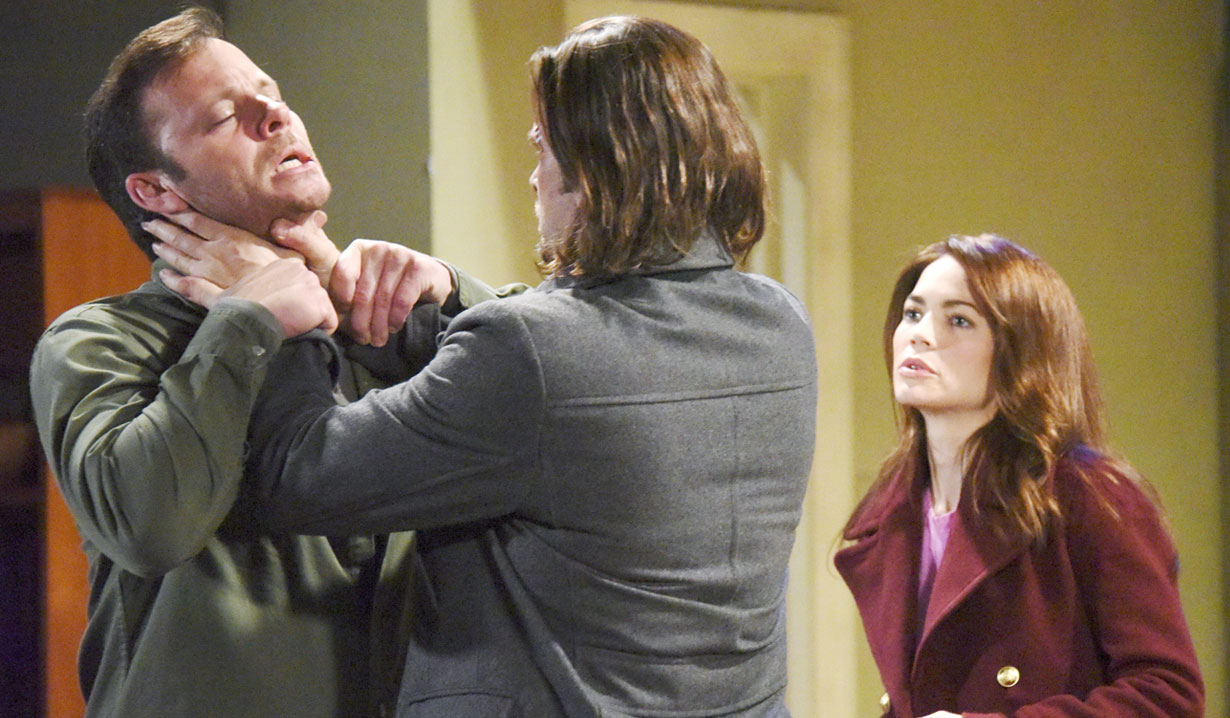 Sam arrives at GH to see Jason. He explains that Julian drugged him to halt his investigation, and Julian seems generally afraid for her and Danny. Jason and Sam devise a plan to try and throw the mystery woman off their track, while trying to find out who she is. Sam learns her father is coming in soon for his physical therapy, so they must act fast. Jason makes a call. In his room, Franco remembers the trophies from the storage room were like those at Seth Baker’s house. Later, an orderly takes him to get an MRI. When he’s left in a wheelchair the hall, Franco makes his escape. Dante arrives later as the orderly returns to find Franco is gone. Ava tucks Avery in at Sonny’s, and then is confronted by Sonny about who is targeting her family. She doesn’t know who it could be if not him. Sonny asks about any long lost Jeromes that may want to take over, but Ava says she and Julian are the last Jeromes. Sonny gets a call he has to take, and tells Ava she can go. Jason is on the phone and asks his old friend to visit him within the next half hour. Valentin talks with Nina in the park about his past with Anna at the WSB. He tells her about his childhood and the severe form of Scoliosis he had that left him a hunchback, and the bullying he suffered, but how Anna was the first to be his friend. He reveals he messed up by trying to kiss her, but she inspired him to get the surgeries he needed to get better. Nina calls Anna ugly inside for not seeing how incredible he is. He thanks her for not feeling pity or disgust for him. They decide to head home, but Nina says she needs to run a quick errand and leaves.

Laura and Lulu drop by to see Anna at her place in hopes she has found something that Lulu can use against Valentin. Anna explains her connection to him in the past at the WSB, and how he was a genuinely good man then. Anna and Laura both advise Lulu to meet Valentin half way, which will give her time to build her case against him. Lulu claims she just remembered something she needs to do and heads out. Laura warns Anna that Valentin is no longer that good man she once knew and to be careful. After Laura leaves, Nina arrives and asks Anna what she wants with her husband. In the PCPD interrogation room, Dante tells Alexis that forensics has cleared her as a suspect. Dante leaves and runs into Julian, who is there at his request to answer questions about Franco’s kidnapping. Julian swears he had nothing to do with it. Alexis and Diane walk out of the interrogation room, and Julian asks her if she confessed. Alexis fills Julian in on what has happened. While she didn’t kill Tom, she did run Julian down, and she intends to confess to that. Julian won’t let her throw her life away and says she deserves a fresh start. Later, Alexis tells Diane that she wants to tell the bar that she’s not ready to get her license back just yet. Diane can’t believe her and storms off. Julian tells Alexis that he’s proud of her and will be here to help her.

Seth stops Liz from leaving his house with the evidence she found against Tom. He cries that the minute he saw the album that he knew his brother was not reformed, and then he found him attacking that woman. Seth admits to stabbing Tom, beating Franco up and locking him in his storage unit. Seth says Tom’s now destroyed him like he destroyed Liz, but Liz says she overcame what Tom did to her and so can he. She begs him to let her call the police. Suddenly Franco bursts in and attacks Seth. Seth confesses to killing Tom and leaving him in the locker, possibly to die. Franco grabs him by the throat and Seth begs him to kill him as he deserves it

Dante meets Nathan at GH and learns about Franco’s escape. A cop arrives with some records Dante asked for on the storage units, and they learn Franco was locked in Seth Baker’s unit.

Back at Seth’s, Franco lets Seth go and refuses kill him and be the man he once was. Dante and Nathan arrive and arrest Seth. Dante needs a statement from both Liz and Franco, but Liz insists Franco return to the hospital.

Lulu and Valentin meet with one another at The Floating Rib to talk about Charlotte.

Lulu thinks she and Valentin can hash things out.

Michael asks Nelle about the other man she’s seeing.

Laura walks in on Sonny meeting with someone and asks what the hell happened.

Jason tells someone, “I can’t do this anymore, I’m out.”

Posted 39 mins ago
Posted on: TVLine