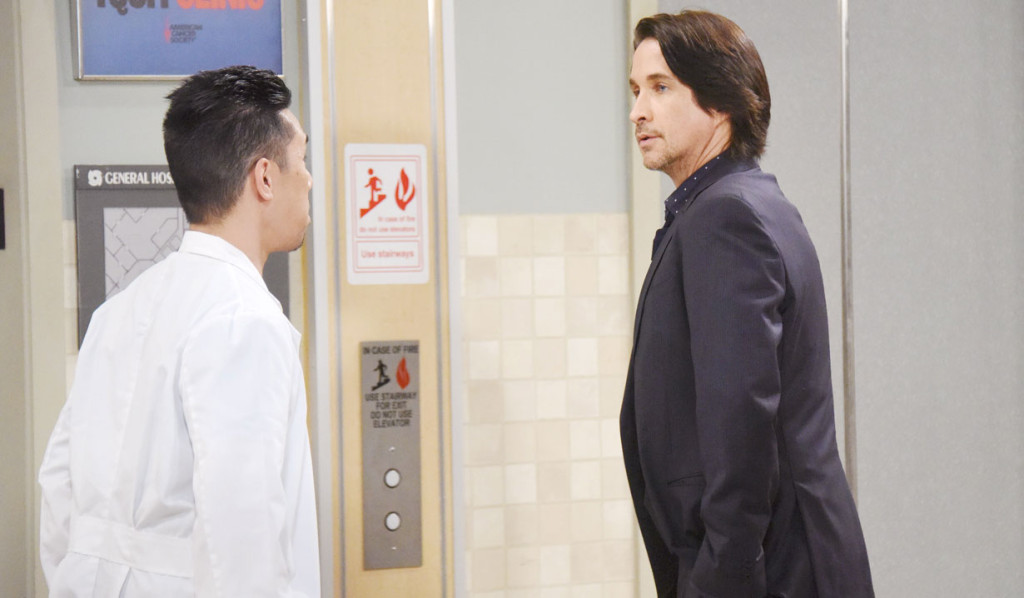 Finn and Hayden make out in the hospital elevator and decide to act professional at work as they step out. They make dinner arrangements as Nurse Amy watches them and tries gossiping with Griffin. Brad rushes over to the couple. He explains that the serum they created could help lots of people. They discuss patenting a drug and then Hayden bustles off. Griffin interrupts and they send Brad off. The doctors discuss Finn’s back problems and he talks him into writing a prescription for pain meds. Finn gets him to double it. After Griffin runs off, Brad confronts Finn about his drug use. Down the hall, Nurse Amy corners Hayden after eavesdropping on her conversation and starts quizzing her about Finn. Hayden says this is none of her business. Amy won’t shut up and insists that they are friends. Hayden admits there is something going on but they’re being discrete. Later, Hayden runs into Griffin and they chat for a moment. When she turns around, she sees Finn arguing with Brad, who threatens to tattle to the hospital board. Brad wants to be compensated for helping to make the drug or he’ll rat him out. Once Brad walks off, Hayden heads over to quiz Finn but he fobs it off. Back over at the nurses’ station, Amy tells Griffin that Finn and Hayden are a couple.

Alexis is on her porch telling herself not to drink when Dante jogs up. He asks about Tom. That startles her. When she doesn’t want to talk, he asks her to the station. She decides to talk. The cop quizzes her about Tom and where she was when he disappeared. She’s not helpful and tells him to talk to her lawyer. After he leaves, she collapses, gasping, “No!” Soon, Diane shows up. To her chagrin, Alexis announces she can’t go through with the hearing. Diane explains that a new judge has been put in charge of her case and she thinks highly of her. Alexis tells her to go ahead. There’s something she has to do before she leaves.

At the police station, Liz assures Nathan that Franco is innocent this time. Baker’s brother, Seth, stomps in to demand that they arrest Franco. Nathan says there’s an APB out. Unsatisfied, Seth storms out. Liz trails after him and says she wants to help. He refuses to work with her and walks away. Meanwhile, Dante arrives and tells Nathan what happened with Alexis. They need to get a search warrant for her place.

At the Floating Rib, Sam finds the letter that Franco left saying he was trapped and calls Kiki and then Jason. When Kiki arrives, she tells Sam where she found the piece of paper. Before she can run off, Kiki tries to talk her out of it but Sam won’t listen. Kiki waits around and tries calling Sam but her phone is dead. Franco is still trapped in the warehouse. He tries to stay warm and notices he’s surrounded by trophies. Picking up a pad of paper and a pencil, he draws a picture of Liz. He loves her and tried to be better for her but doesn’t know if they’ll be together. After he collapses on the floor, he hears Sam calling his name and grunts. She calls Jason but gets voicemail so she uses the fire extinguisher to smash the lock. She finds Franco on the phone and he tells her he has no idea who did this to him, but, judging by the trophies, they were good at basketball.

Liz chases Seth all the way home. She repeats Franco is innocent and asks him how he knew that Franco put Tom in a cage when the cops never released that information. He says his brother told him about it. She explains Tom put Franco in the cage and asks him if his brother ever mentioned the Roadhouse. The camera pans over to show he has a table covered in basketball trophies.

Nina wants to do what’s best for Charlotte.

The fog continues to clear on Alexis’ memories.