GH Recap: Alexis comes clean to Sam and something happens to Jason

Tuesday January 24, 2017: Joss returns home, Alexis confesses all to Sam, Kiki and Liz continue to worry about Franco, and Jordan and Curtis kiss. 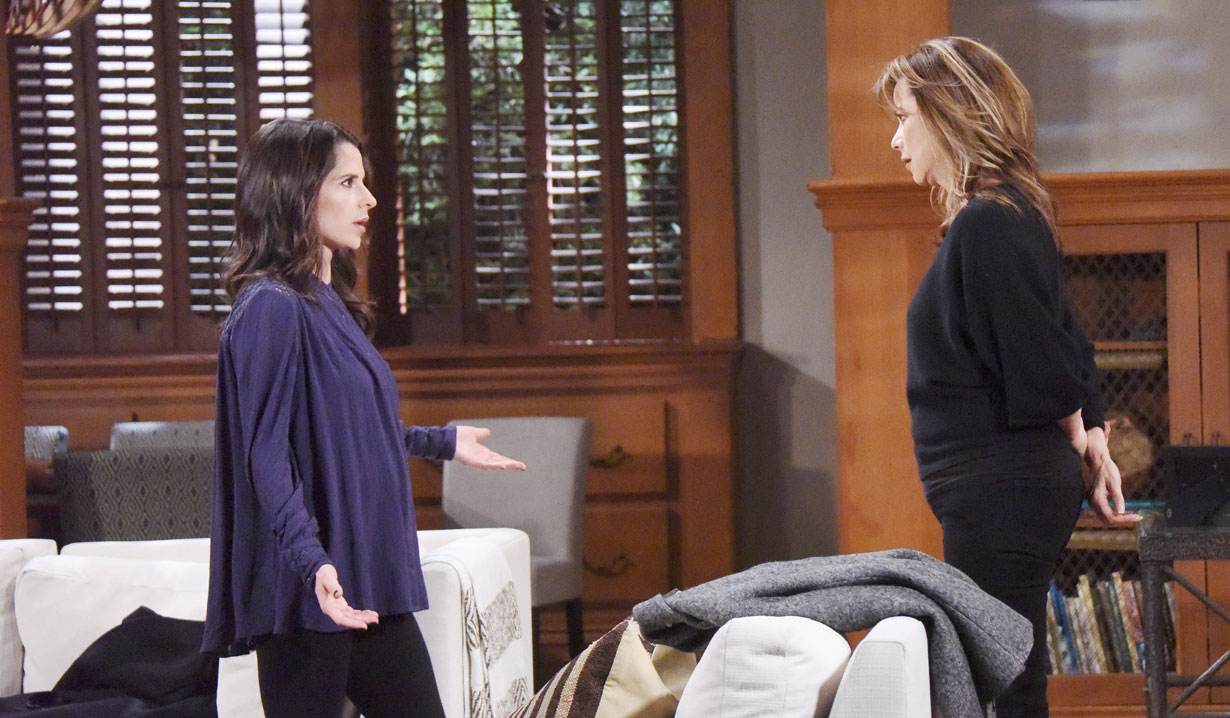 At a hotel out of town, Jordan and Curtis discuss Buzz’s statement, which they just took. Jordan admits that Sonny is innocent, but feels this evidence won’t be enough for the new DA who is determined to convict him. They have time to kill before their trip back home, so Curtis heads out and later returns with some lunch from a place they used to frequent years ago. The two reminisce, play a game of poker, and eventually kiss.

Carly returns home from Australia, and Sonny and Michael ask about Joss. Carly tells them she’s at her office and is refusing to come home. Michael decides to go pay her a visit and talk to her. He leaves, and Carly reveals to Sonny that she Joss didn’t have to live here if she didn’t want to. Carly hopes their family will eventually heal, but she worries what Sonny may do when he finally finds out who is responsible for Morgan’s death. Sonny doesn’t know how he will react, but has learned a painful lesson about retaliation. Sonny tells her all he can do right now is live for today. Jason runs into Liz at The Floating Rib and notices how distracted she is. Kiki arrives to meet Liz and wonders if Jason is there to help them with Franco, which puzzles him. Liz tells Jason that Sam will fill him in if she wants, but she and Kiki are handling things. Jason leaves, and Kiki tells Liz that the police have a warrant for Franco’s arrest in the murder of Tom Baker. Liz shows Kiki Franco’s cracked phone that she found and points out it’s covered in blood. She’s worried something bad happened to him. Kiki feels they should go to the cops, but Liz doesn’t want to just yet. Kiki takes the phone from Liz and says she’ll see if she can get it working, and tells Liz to stay in touch and keep her up to date on developments.

Just In! Michelle Stafford and Greg Vaughan talk sexy calls and children in her podcast

Sam drops by Alexis’ place and is stunned when Julian walks down the steps. He leaves them to talk and Alexis explains to Sam that Julian is blackmailing her and that is why he is here. Alexis confesses she was the one who ran him over. Sam asks her mother what else she’s been lying about. Alexis admits to her drinking problem, and that it was Julian who helped her detox and pushed her to go to AA. Sam supports her mother, but asks Alexis if she was involved in Tom Baker’s murder. Alexis admits she may have killed him, and the two discuss Liz’s suspicions and Franco going missing. Alexis admits Franco knows she was at the bar the night Tom was killed. Sam tells her mom she must go, and she rushes out.

Julian goes to the Metro Court and takes a call. He promises the person on the other end that he will take care of Jason. Later, Jason arrives to meet Julian, who reveals he has been living with Alexis again and Sam just found out. Jason thinks Julian is keeping something else from him, but Julian refuses to say anymore and walks off. Jason finishes his cup of coffee, but when he gets up to leave, becomes dizzy and passes out. Elsewhere, Michael gives Joss a big hug when he sees her in Carly’s office. However, she refuses to live with Sonny because he killed Morgan. Michael explains that Sonny isn’t responsible for Morgan’s death, and she needs to stop being angry and start to grieve for their brother. Nelle pops her head in and tells Joss if they stay stuck in their anger then they become a victim to it. Nelle says Sonny made some bad choices, but she remembers how happy Joss was living with Carly and Sonny once.

Back at Sonny’s, Sonny and Carly kiss, but she stops it before things go further because she needs to check on Joss. Michael, Nelle and Joss walk in, and Joss tells Sonny she won’t give up on him. The two hug. Sonny tells Joss that he and her mom are taking things day to day, and for now she will stay with her mom at her house. Joss goes up to see Avery, and Carly thanks Nelle and Michael for whatever they did.

Julian returns home, where Alexis fills him in on what transpired. She remembers Julian promising to help her and she questions him if he did something to Franco.

Sam finds Liz at The Floating Rib and tells her they need to go find Franco.

Tracy tries to get Jason to wake up.

Liz asks Sam what Alexis told her about the night Tom was killed.

Alexis asks Julian if he’s admitting to being behind Franco’s disappearance.

Franco writes a note in the place he’s locked up in.

Jordan and Curtis move things to the bed.