GH Recap: Olivia reveals her motives, and Anna has a memory of Valentin 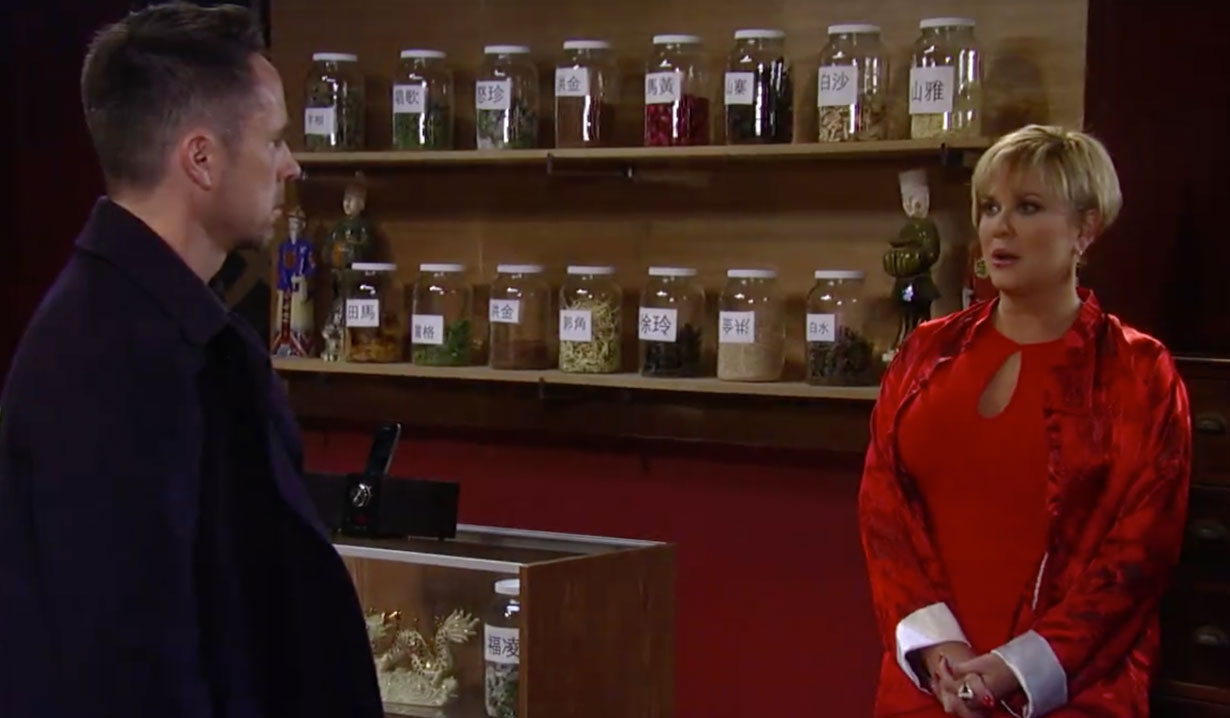 Maxie and Nathan celebrate their reception at The Metro Court. Nina heads to the bar to get a drink and runs into Griffin, and accidentally opens her mouth about Claudette. Meanwhile, Nathan and Maxie share their first dance as husband and wife, and later Nathan dances with Obrecht while Maxie shares one with Mac. Eventually Spinelli kicks up the music and invites everyone to the dance floor for fun. Griffin chooses to pound drinks at the bar rather than dance, while Lulu vents to Dante that she wishes she could be comforting Charlotte. Charlotte drags Valentin out to the terrace and asks about Polaris. He tells her that it’s too cold for star gazing and suggests she head back inside. She does, and a drunk Griffin comes out and accuses Valentin of killing Claudette. Charlotte witnesses the exchange through the door and runs off. Lulu goes after her and finds her hiding in a linen closet crying. Charlotte reveals that she misses her mommy. Lulu tells her that she still has a mom, and that she is her real mommy. Meanwhile, Valentin beats up Griffin and tells him that he’s sick of his preaching. Anna bursts in, slaps Valentin and calls him a vicious thug. She says Griffin is a good man and that Valentin disgusts her, which prompts Valentin to stutter, “That’s what you always said about me!” She calls him a twisted coward, and he continues to stutter as he cries that he was always invisible to her. Anna suddenly remembers the past when a man who stuttered came to her room to celebrate her birthday with her. She refused him, and he asked why. The flashback has Valentin dressed in rags and deformed with a hunchback and a scarred face. Back in the ballroom, Maxie and Nathan cut their cake, and Maxie tosses the bouquet and Emma catches it. The couple departs for the honeymoon suite.

News: NBC renews This is Us for second and third seasons

Liz drops by Sam’s place to talk to her about Franco. She tells Sam that the cops think Franco killed Tom Baker, but he’s trying to protect the real killer, who is Alexis. Sam refuses to believe this, but Liz swears it is the truth and they need to help Franco because he’s disappeared. Liz tells Sam to think about how her mother has been acting lately, and if Alexis did kill Tom, then she was probably trying to defend herself.

Alexis sits in her house staring at a bottle of cooking sherry. Ava waltzes in and demands to know what she did to Julian, who is not responding to her. Alexis has no idea where he is. Ava notices the bottle of sherry and urges her to take a drink, but Alexis refuses. Ava accuses her of not being ready for sobriety because Julian is keeping her secrets, and she’ll just find new ways to secretly drink. Alexis says she’s wrong and walks away.

At Olivia’s new place of business, Julian refuses to kill Jason for her, so Olivia suggests she could target someone else in his family like Lucas. Julian lashes out at her for poisoning Leo, but she laughs and says they were just sugar pills and she would never hurt a child. He reminds her that she caused Anna to miscarry Duke’s child. She snaps at him never to say that bitch’s name again. She refuses to let Jason reveal who she is until she’s ready to do it herself. Julian warns her that if she kills Jason, then Sonny will kill her. He suggests she pin the bomb on something else, and proposes a plan. She warns him that it better work or else. She can see how much he loves his children and she wishes she knew what that felt like. She feels cheated out of everything he got that she didn’t while hiding in exile on the other side of the world. He thinks she can still have that life, but she’d rather get revenge on those who screwed her over. Olivia pronounces herself queen of the Jerome family and tells him she calls the shots now.

Julian returns home and finds Ava waiting for him. She grills him about Sam’s accusations that there is a new player on the scene, a woman, and wants to know who it is. He tells her to stay out of it and shows her out. Alexis comes downstairs, and shares that if Franco ends up arrested for Tom’s murder that she may not be able to handle it sober. Julian promises to be there for her.

Back at Olivia’s place, Olivia opens a cabinet and vows to make Julian pay for what he did to them. As the camera pans to the cabinet we see photos of Duke in which Olivia has pasted her own face over Anna’s. She knows they could have had a beautiful life together if it weren’t for Julian and Anna. Olivia flashes back to Anna warning her to stay away from Duke, and she vows Anna will get hers too.

“General Hospital” is pre-empted tomorrow due to The inauguration of Donald Trump.

“GH” will return with a new episode on Monday, January 23.