GH Recap: The cops close in on Franco, Julian makes a move to protect Alexis 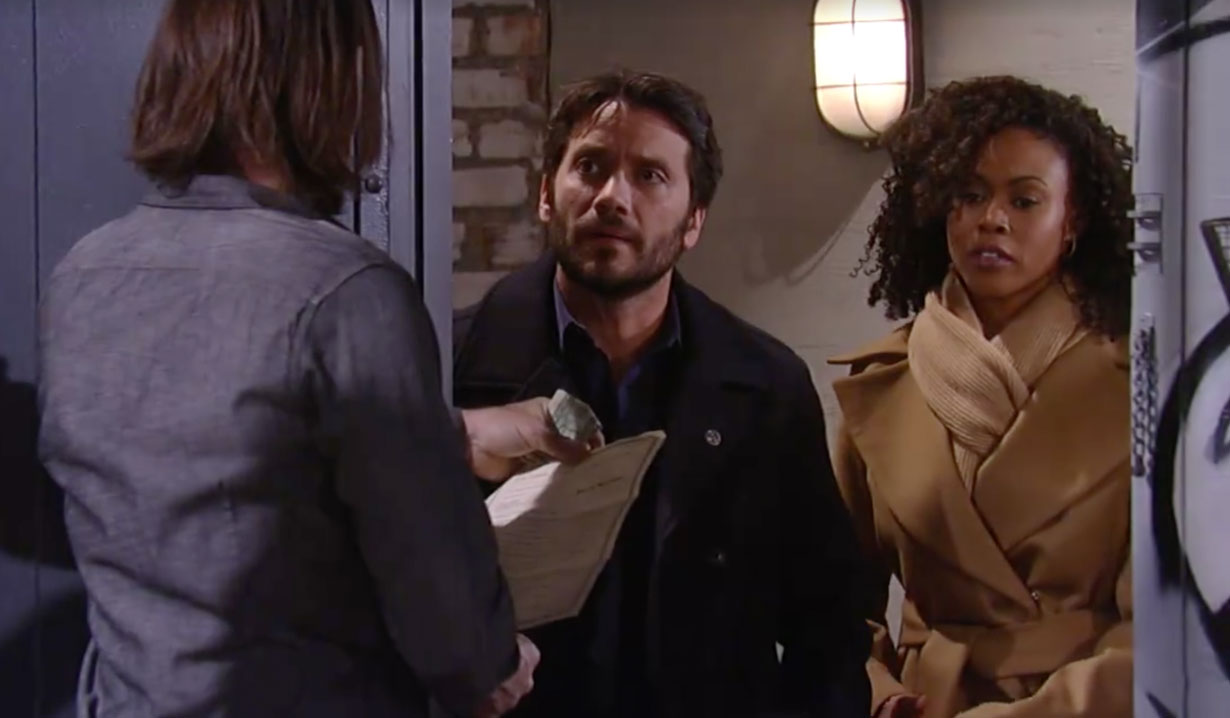 Maxie and Nathan return home from Canada to find Lulu in their apartment packing up their wedding gifts. Maxie brings her up to speed on Claudette’s death. Lulu fears that Valentin killed her for crossing him, and is determined to get Charlotte away from him. Maxie points out that may have gotten Claudette killed, and not to do anything Spencer-like. Nathan excuses himself to take a work call. Lulu switches the topic to the wedding, but Maxie says they can’t marry on the heels of Claudette’s death. Maxie feels Nathan needs to process it first. Nathan eavesdrops as Maxie admits to her friend that it feels like she’s stuck in limbo. Lulu heads out, and Nathan tells Maxie he needs to head to work. She decides to come with him, but first needs to put her things away. Once she’s out of the room, Nathan calls someone for a favor.

Anna confronts Valentin at the Metro Court with the old photo of her that Emma stole from him. She knows he was at the training camp when she was there, and on her birthday. He admits he was at her birthday party and even in her room. He taunts her over the fact that she doesn’t remember. Anna promises him that she will remember what he did to her, but he tells her it may be what she did to him.

At GH, Laura and Liz discuss Franco. Liz admits she is struggling to move on from his past and embrace who he has become, and perhaps she’s being too cautious. Laura thinks she needs to just take a step back and breathe. Liz thanks her for the talk.

Dante and Jordan appear at Franco’s place with a search warrant. Dante spots the dog crate. Franco reminds them he had a dog that he gave to Jake, and Monica has it now. Jordan shows him a photo of the knife that was used to kill Baker. Franco identifies it as an artist’s knife used to sharpen pencils. He says he doesn’t have one, and he won’t speak to them further. He allows them to search his place and leaves them to it. Jordan finds the portrait he did of Elizabeth, which is beautiful compared to the frightening portrait of Tom that Dante discovers. Liz arrives to see Franco and is shocked to find Jordan and Dante there with a search warrant. She decides to leave them, but becomes upset when she sees the dog crate. Jordan realizes Liz knows something and tells Dante to have the cage tested for prints and DNA. Jordan asks Liz why Franco might have this dog cage. Liz remembers Franco’s confession, but has nothing to tell them. Liz leaves, and Dante finds a receipt from an art store and the knife is listed on it. Outside, Liz desperately tries to call Franco. Alexis wakes up on her couch and is startled to find herself sleeping next to a clothed Julian. She remembers he was helping her through withdrawals, and decides to turn herself into the police. Julian grabs the phone from her and tells her no big decisions while she’s still detoxing. Alexis admits she needs help and agrees to go to an AA meeting. Julian wants to go with her, but she refuses and takes a cab. After she leaves, Julian calls someone and says, “Do it, now.” Later, one of Julian’s thugs arrives with Gene. Julian questions him if he knows Alexis, and shows him a photo of her. Gene says he does, but Julian instructs him, “No, you don’t. She has never been in your bar.” Julian’s man twists Gene’s arm until he understands. Julian pays him for his silence.

Franco meets Scott at Gene’s and tells him that the cops are tossing his studio right now. Scott asks if they will find anything. Franco admits perhaps. Scott begs his son to tell the authorities that Alexis could be the killer. He refuses to throw Alexis under the bus, which infuriates Scott. The two argue as Gene is escorted in by Julian’s man. Eventually Scott and Franco leave separately, and someone clubs Franco on the head from behind.

Alexis sneaks into the hospital with dark glasses, but is seen by Laura. The two discuss Nikolas, and Alexis apologizes for not being able to stop Valentin from taking Wyndemere. Laura asks Alexis if she could give Lulu and Dante some guidance with their own Valentin issue. Before they get into it, Laura gets a call and excuses herself. Alexis slips into the AA meeting. Later, Lulu meets with her mom and tells her about Claudette’s death. Laura begs her to be careful as she can’t lose another child to that man.

Dante and Lulu give Valentin news about Claudette

Nathan has something to tell Nina.

At Crimson, Maxie tells Dillon she’s asked too much of him, and says she’s leaving.

Alexis tells her story at the meeting.

Kiki tells Liz she is trying to convince Franco to go to the cops.

Hayden walks in on Finn shooting up.