GH Recap: An announcement stuns Lulu and Dante, as Alexis recalls a memory 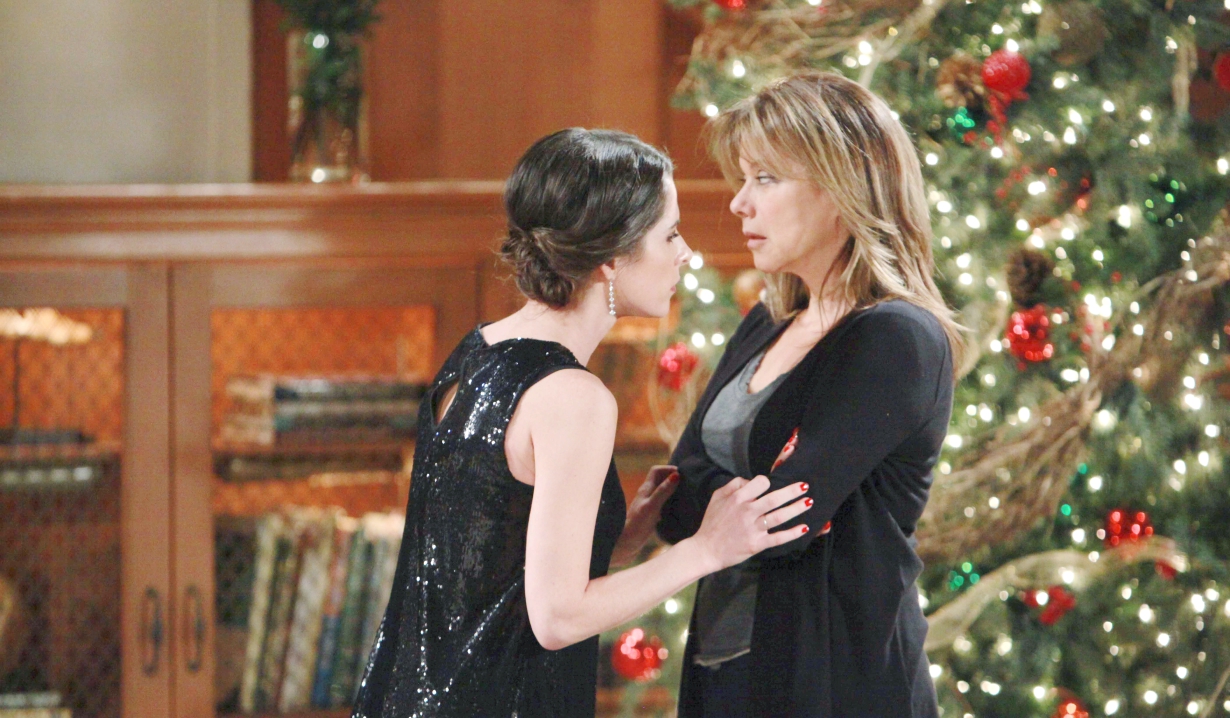 At the Metro Court, Valentin and Nina arrive at the honeymoon suite. He carries her in while showering her with kisses. Nina tells Valentin they did the right thing for Charlotte and says, “I love you.” He’s not interested in spending his honeymoon talking about Lulu. He kisses Nina and teases her about the magnificent ring he’s going to buy her. They undress, and make love on a bed of roses. When they come up for air, Nina reminds Valentin of his promise for them to celebrate. While he showers, Nina finds a gun in his pile of clothes. She confronts him when he rejoins her. He doesn’t advertise he carries but believes sometimes a gun is necessary. Valentin kisses her, reminding her how she’s the only one he lets his guard down for. Down at the bar, Lulu tells Dante they need to protect Charlotte and apologizes for talking so much about it. Dante kisses her, thinking she’s cute. Lulu’s adamant, she must win in court, and worries about how close Charlotte’s become to Nina. Dante’s surprised that Lulu’s fight with Nina involved her mentioning her plan to seek full custody. Dante reminds her that fighting with Nina could affect her custody battle. Lulu doesn’t see how, Nina’s an outsider who doesn’t matter. They start to leave as Valentin and Nina arrive for a celebratory drink. Dante turns down an invitation to join them, but Valentin’s sure it’s something they’d be interested in.

Sam and Jason arrive at Alexis’ as Julian tries to wake her up. After he does so, he hides while Alexis tries to get rid of them but Sam wants to talk now. Julian listens as Sam begins telling her about a man, but she stops to ask Alexis if she’s been drinking. Alexis admits having a crappy year so she felt entitled to drink enough to pass out. Sam’s sorry she was worried. Jason shows Alexis a photo of Rudge and she confirms he came to see Julian but lies that Julian wasn’t there. They leave, and Julian comes out of hiding to stop Alexis who is getting ready to leave as well. He doesn’t want her out drinking. She leaves anyway and Julian texts Rudge about Jason and Sam being suspicious. Rudge knows and will take care of it. Julian questions how.

Related: Deconstructing GH: Between crazed and vengeful to drawing many over the edge

Franco arrives at Elizabeth’s. She gets to the point and asks if the murder weapon is his. He wants her to believe he didn’t kill Tom Baker but admits it was his knife. She doesn’t know what to think after Franco locked Tom up in a dog-crate. Franco assures her, the man he is now wouldn’t kill Tom Baker. He explains the visions he had while locked up in the crate himself and admits coming to terms with how he wants to be better for her. Elizabeth knows he loves her and believes he didn’t kill Tom but thinks his actions were extreme. Franco believes it will be ironic justice to go down for something he didn’t do. The only thing that scares him is losing the best thing that ever happened to him but he doesn’t think they should see anyone until this is all over.

More: Soaps Spoiler Digest: Franco sets out on a mission

At Sonny’s, Carly stops Sonny mid-kiss, certain she should go. She can’t risk losing someone else she loves because of his business. Sonny loves her and gets her to admit she wants to stay. They kiss passionately, and then go upstairs and make love. After, he’s glad she stayed on New Year’s Eve. Carly shares how Nelle was rooting for them along with everyone else. Sonny confesses, he’s sorry his actions kept them apart. Carly’s upset she turned him away and quiets him from telling her anything else with a kiss since they are together now.

At the Metro Court, Sam’s upset after smelling alcohol on Alexis’ breath. Jason’s sure it’s not a one-time thing. They discuss their investigation and Jason points out they are back where they started, believing Julian is involved in the car-bombing. Jason’s confused that Rudge didn’t know Julian and Alexis were divorced. Nearby, Valentin announces that he and Nina got married. Lulu thinks it’s absurd and doesn’t believe it will help Valentin. Nina points out how she asked him, not the other way around.

Alexis orders a drink at the Roadhouse. The bartender reminds her that she stiffed him the last time she was there. She doesn’t remember at first but during her next sip of vodka her encounter with Tom Baker at the bar rushes back to her.

Franco confesses something to Obrecht.

Nathan tells Maxie his divorce will happen one way or another.

Nina wonders what will happen when Claudette comes back.