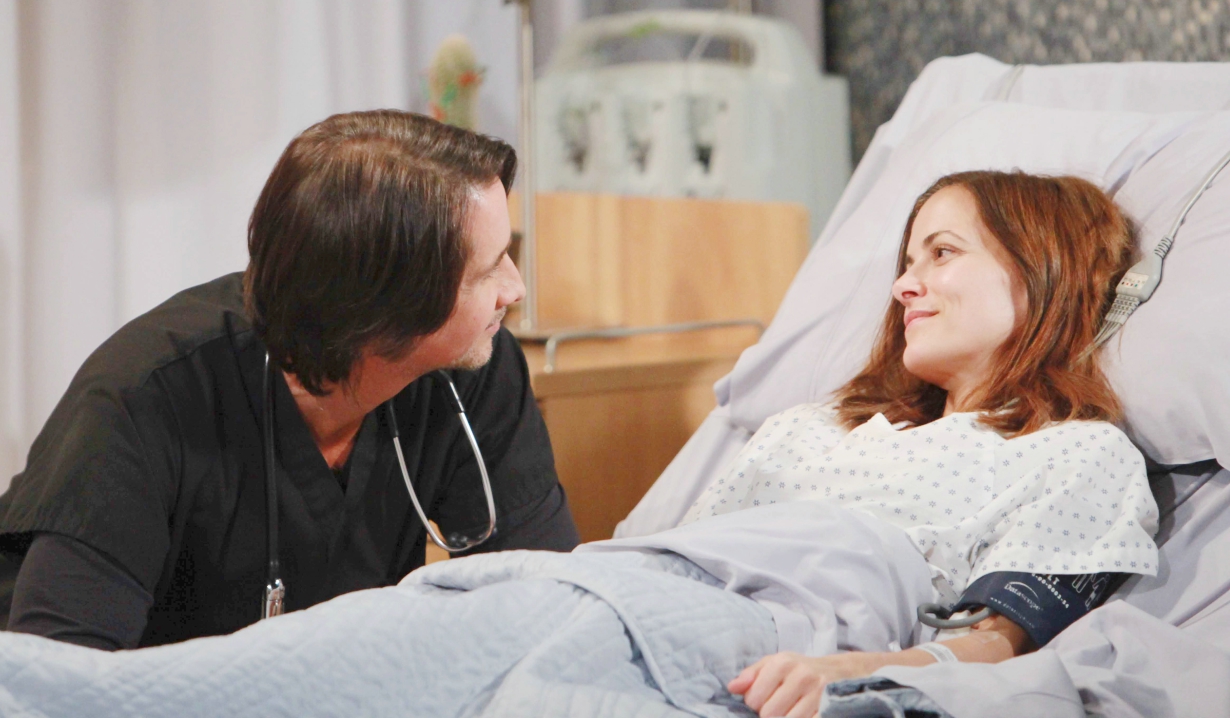 At the Metro Court restaurant, Dillon worries Tracy over his plans to go back to LA. She’s sure he’s avoiding Kiki but announces as she leaves that he’ll be back by Three Kings Day. Upstairs in Maxie’s room, Felicia arrives with Lulu close behind bringing cough drops, tissues, and cold medicine. Lulu exclaims, “Nothing is going to stop you from getting married today.” Felicia opens the door and Robin arrives saying, “It’s a good thing there’s a doctor in the house.” Maxie’s goal is to get through the ceremony. Robin leaves as Nina arrives. Nina takes Lulu aside and warns that Valentin is escorting her to the wedding. Meanwhile, Dante brings boutonnieres to Nathan’s room where Nathan’s worrying something will keep him from marrying Maxie. Mac arrives and pours everyone a drink. He toasts Nathan and Maxie, and then helps Nathan get ready. Nathan thanks him, but Mac feels just as lucky having him join the family. The guys goof off during photos with Dante assuring Nathan that nothing will go wrong. Robin arrives to find the guys crawling around the floor looking for something. She leaves with Mac and Dante and Nathan return to their search until Dante finds the rings.

At GH, Hayden wakes Finn up from the chair at the foot of her bed, both are happy they are still alive. He checks her vitals while she tries to grasp the fact she owes thanks to a reptile and wonders if he’s been cured too. Tracy interrupts, and voices concern over Finn’s sweats. He leaves them and retreats to a bench nearby in pain. Alone with Hayden, Tracy wonders how the two of them are getting along. They play cards until Finn arrives, refreshed. Before leaving them, Tracy announces Finn has his job back. Alone, Finn says it’s New Year’s Eve and kisses Hayden who thinks 2017 will be a good year.

At home, Nelle holds a baby rattle staring at the inscription and says, “Are you ever sorry, Caroline? You will be.” Carly knocks and calls to Nelle who hurriedly hides her jewelry box. She lets Carly in who claims she knows the truth about her and Sonny and she thinks it’s so sweet. Nelle’s confused until Carly admits knowing about the gift. They discuss the New Year and Nelle admits having a resolution she resolves to see through this year. She promises Carly will find out soon enough.

Arriving at Sonny’s, Bobbie takes Avery’s gifts upstairs. Michael’s phone beeps but it’s not the text he’s been waiting for about New Year’s Eve. Sonny asks Michael who he’s interested in and Michael replies, “Nelle.” Sonny thought they were just friends and warns it would be a mistake to get involved with Nelle. Bobbie overhears from the stairs and rushes down to say it’s too soon while he’s grieving. Michael leaves and Bobbie wonders if Sonny has misgivings about Nelle. He claims he doesn’t. Carly arrives and Bobbie leaves the two of them as they remember Morgan. Upstairs, Bobbie looks at a pill she found and takes it when she leaves. Alone, Sonny gives Carly a gift of pressed flowers familiar to their first wedding. She thanks him and then decides to go. Sonny asks her to stay.

At Kelly’s, Kiki’s checking her appointment reminders when Ava rushes in, surprising her with another gift – New York bagels from her trip to see Delia. Ava hopes they can spend New Year’s together but Kiki admits a friend convinced her to make some changes. Ava’s surprised by Kiki’s warm hug as she goes, thinking it feels like they’ll never see each other again.

Kiki gets on a transcontinental bus and is surprised to see Dillon seated in the back. After a few miles, Dillon joins her and asks where she’s going. She admits having a job interview in LA. He thinks it would be better for him to get off at the next stop. The driver announces they’ll be in Detroit in five hours.

Michael calls Nell from the Metro Court to ask if she has plans. She doesn’t think it’s a good idea to meet him and hopes he’ll understand. She hangs up when there’s a knock at the door. Bobbie’s there to return Nelle’s pill and questions why she was in Sonny’s bedroom. Back in Maxie’s room, she freaks out waiting for Nina to return with her shoes. Lulu pops outside as she returns, thanks her, and recommends the next thing Nina could do is uninvite Valentin to the wedding. An argument ensues over Charlotte. Everyone becomes distracted and Maxie takes the nighttime cold medicine while alone. Lulu finds her passed out when she brings the shoes in. In Nathan’s room, he receives a call and asks, “Did you hear from Claudette?” He gets off the phone and tells Dante, “Maxie and I aren’t getting married today.”

Carly tells Sonny she has to walk away.

Dillon wonders if Kiki’s left Port Charles because of him.

Valentin tells Nina that Lulu is suing for sole custody of Charlotte.

Curtis clinks glasses with someone.