GH Recap: Elizabeth seeks the truth as a murder weapon is revealed

Monday December 26, 2016: Franco surprises Elizabeth with a startling confession, Nelle shares her past with Michael, and Jordan and Andre bump into each other. 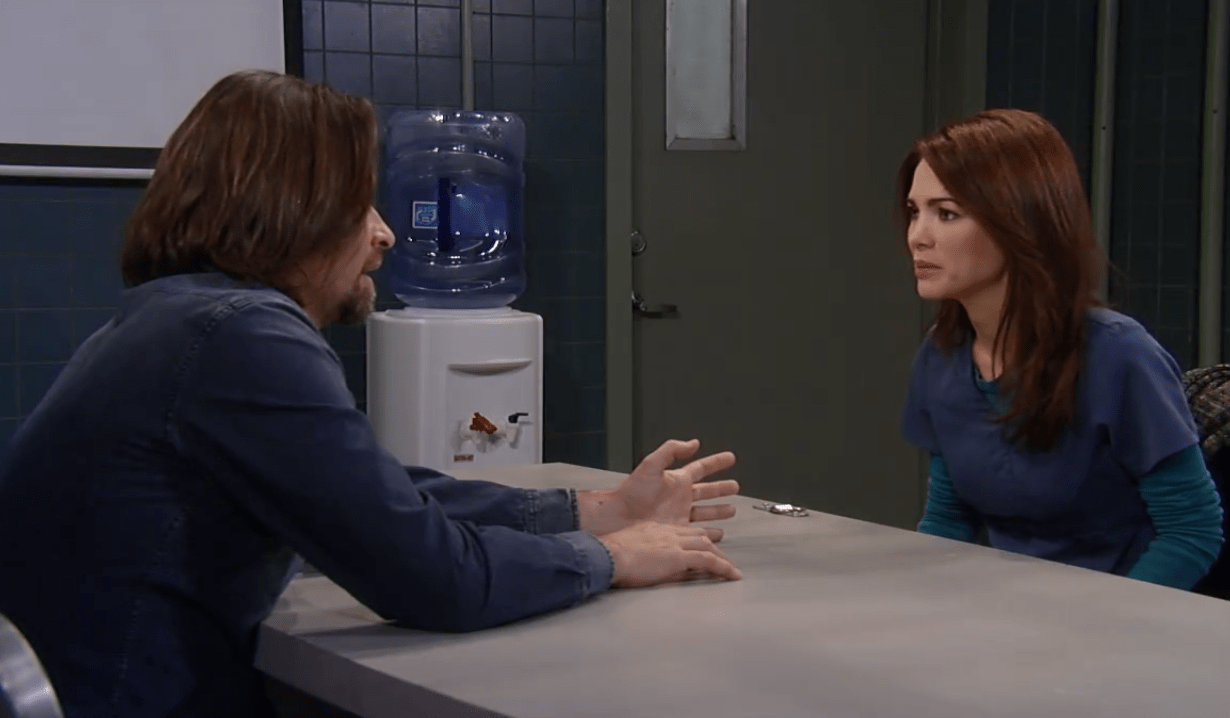 At Alexis’, Julian pours out his soul to her. She kisses him passionately, and then stops, saying, “I didn’t mean it.” Julian doesn’t believe her but is worried about her drinking. Alexis taunts that her kiss was premeditated, much like what he did to Duke and Carlos. He can remember everything they had but it will never happen again. Julian writes her off as drunk. Alexis tosses his pain meds to him, promising to be a good nurse to get him out of her house soon. He grabs her stumbling away and asks, “Are you okay?” She doesn’t welcome his help and retreats upstairs alone.

Scott shows up with Elizabeth at the PCPD as Franco questions Dante about Baker’s death. Dante explains there are eye-witnesses to Franco’s public altercation with Tom. They gather in interrogation where Franco confirms he threatened Tom to protect Elizabeth. Scott follows Dante out. Alone, Elizabeth asks what’s going on. He apologizes for not keeping his promise to stay away from Tom. Elizabeth impatiently blurts out, “Did you kill Tom Baker?” Franco fesses up to holding him in a dog crate so he would miss his parole meeting, and then walked away free. He doesn’t regret wanting to keep her safe. Dante returns, Franco’s free to go. Scott offers to take him home to hear more about Tom but Elizabeth exclaims, “I’ll take him.” While leaving, they see Dante on the phone holding an evidence bag with Franco’s knife from his studio. Franco chases after Elizabeth as she rushes off and grabs her. She points out that she knows it’s an artist’s knife, like one he would use.

Jordan stops walking to finish her call regarding Baker’s murder. Andre bumps into her as she’s getting off the phone and greets her with, “Hello Stranger.” She’s interested in hearing what’s up with him and since they haven’t seen each other for a while, she decides to spend some time with him. They walk, and then sit on a bench. He’s sorry for withholding information from her, it wasn’t his intention. She accepts his apology but hopes if they pick up where they left off, she doesn’t want Curtis getting in the way. Andre assures her that he won’t and was hoping they’d be spending the holidays together. He admits buying a gift but it’s okay if she didn’t get one for him. She admits she did and they agree there is enough of the holiday season left to share. He kisses her.

At Sonny’s, Carly says her goodbyes to Michael and Nelle. Sonny thinks she cleared them out quick and Carly admits wanting to be alone with him. She confesses knowing that he and Nelle were lying to her, and she knows why. Sonny worries but relaxes once Carly points out the gloves were from Nelle, and not him. She didn’t a gift from him, the way they honored Morgan together as a family was gift enough. Sonny agrees, it was his too. He invites her to come on Christmas to see Avery open her presents. Carly accepts. Sonny thinks Carly’s been good for Avery and for him as well, hoping that her kind gesture of coming Christmas was a little bit for him as well. She’s honest, some of it was for him. Sonny hopes they will find their way back to each other. She doesn’t know how she’ll feel tomorrow but knows tonight she was where she wanted to be.

Nelle invites Michael in when he drops her off and he agrees to hot tea. They discuss the tribute to Morgan and she admits enjoying every minute of spending time with his family. Michael thought she was sad earlier and wonders why. She reminisces about past Christmases with her father who had trouble making ends meet. She never got things she wanted and admits jealousy being around those that have so much. Michael understands, he remembers feeling sorry for himself when things were taken away from him. His fix was remembering three things each day that he was grateful for. She thanks him and knocks over her musical jewelry box in her hurriedness to turn off the kettle. Michael offers to help, but she snaps, “No!” He turns off the kettle but can’t find the tea and returns. She offers to get cocoa instead and leaves Michael behind staring at the jewelry box. She returns with the cocoa and inquires if Michael is going to ask what’s in the jewelry box. He’s too polite, knowing she will tell him if she wants. Nelle admits it’s a Christmas present from her childhood where she keeps her memories. She agrees it would be disrespectful to ignore the memories and where she came from. They wish each other Merry Christmas and he leaves. Alone, she holds the baby rattle in her jewelry box.

Lulu tells Laura she must get Charlotte away from Valentin.

Alexis wakes up to Julian saying, “Much better than a hangover, right?”

Winston advises the boss that Julian needs a reminder that there are consequences.

Jason and Curtis tell Sam they are no longer convinced that Julian is behind the bombing.

Laura admits to Anna that she will kill someone if a ruling isn’t what she expects.

Nina finds Valentin upset over something he lost.