Wednesday December 21, 2016: Franco is visited by three hallucinations, Maxie tries to trick Sam at her baby shower, and Julian orders Alexis around. 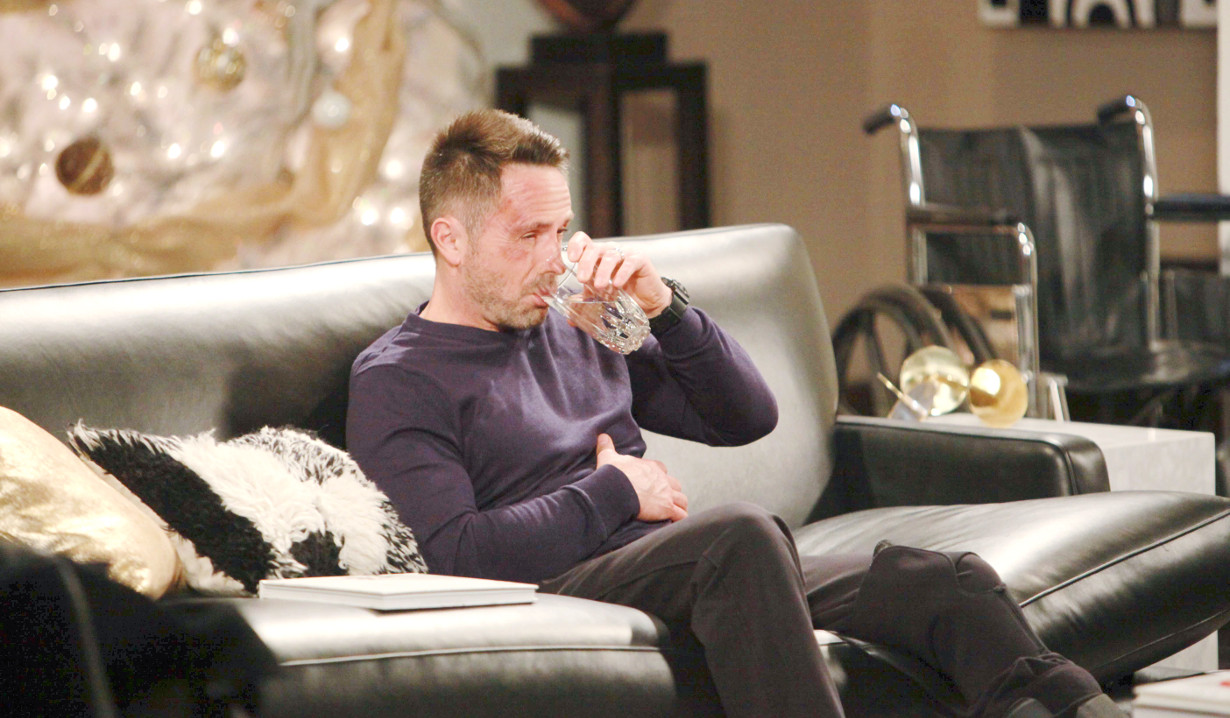 Maxie goes over the plans for Sam’s baby shower with Kristina and Monica at the Metro Court. Maxie has planned to reveal the baby’s sex by cutting open the cake to reveal pink or blue for a girl or a boy. Monica can’t believe Sam was okay with that. Sam and Carly walk in, and Sam wonders what they are discussing. Maxie shifts the conversation.

Jason drops by Sonny’s place to question him about gangs with a connection to China. Sonny gives him the scant info he knows, but wonders why it seems Jason is keeping things from him. Sonny realizes that Jason knows who set the bomb, and Jason admits it may have been Julian. Jason reveals the information about Julian’s van, which is bothering him as Julian isn’t known to leave evidence around. Sonny threatens to kill Julian. Jason advises him that will cost him everything, including his kids and Carly. He asks Sonny to wait and give him time to prove Julian planted the bomb.

More: Where Are They Now? Rob Estes and Scott Evans join Rick Herbst on Daytime Divas

Julian annoys Alexis by making her serve him at his apartment. Alexis tells him she needs to go to Sam’s shower, and Julian expects her to come back with pictures. Alexis storms out, and later Rodge drops by to let Julian know that the boss still expects him to comply with their plans, in spite of his current health. Julian questions Rodge about the peculiar placement of one of his vans blocking the security cameras to prevent a clear shot of who planted the bomb in his car. Rodge tells him if he has a theory about the bomb then the boss would love to hear it. Julian chuckles and says he just has too much time on his hands to think, and it’s obvious it was Sonny. Rodge leaves, but not before warning Julian that he and the boss have their eyes on him.

Related: Soaps.com’s wishes for Julian and Alexis this Christmas

Liz visits Heather at the asylum and asks her how to find Naomi Dreyfus. Heather tells her to get in line, as Naomi owes her money. Liz has tried everywhere, but she’s gone missing after her sentence was commuted. Heather would rather know about her and Franco, but Liz doesn’t want to discuss their relationship. Heather warns her that the real Franco is going to return soon, and Liz better be prepared. Liz refuses to believe that and tells Heather that she believes in Franco, and Franco believes in himself.

At Franco’s studio, Tom chloroforms Franco and locks him in the cage. He takes a knife from Franco’s place and leaves to go pay someone a visit. Franco eventually comes to and has a hallucination of Sam standing there. He asks her to let him out, but she thinks he deserves to stay in there for 1305 days, which is how long she thought he raped her. Sam gloats that Tom is currently out to get revenge on Franco by hurting someone, and it is his fault. She disappears, and then Liz appears to tell him not to succumb to the darkness, and that he can find another way to protect her. Liz vanishes, and a Dark Franco appears to tell him that all he’ll ever be is darkness. Franco swears he is getting better, and he has Liz on his side. Dark Franco tells him perhaps, but time is running out.

Back at the Metro Court, Sam opens her gifts, and then sees the cake which is iced half blue and half pink. Sam gives Maxie a look, and Maxie says, “Surprise, it’s your gender reveal cake!” Sam realizes that Maxie stole the envelope Dr. Lee gave her with the sex of the baby, and she reminds Maxie that it was supposed to be a secret. Maxie apologizes, and Sam forgives her, but only if she doesn’t cut the cake.

Alexis checks back on Julian at his place after the party, but refuses to stay. Julian informs Alexis that he’s decided to move back in with her.

Jason meets up with Sam at the Metro Court after the baby shower is over. Carly overhears Jason telling Sam that he just went to see Sonny and tried to give him some advice, but he’s not sure if he’ll take it. Carly calls Sonny to check in and the two reminisce about Morgan. She suggests they share some of his favorite Christmas traditions with Avery this year. Meanwhile, Jason asks why nobody ate the cake, so Sam explains. They decide to cut the cake, but keep the results to themselves.

Ava asks Julian why he’d want to move in with the woman who ran over him.

Kristina demands to know what is going on with Alexis.

Kiki overhears Dillon telling Valerie how much fun he had with her the other night.

Naomi arrives at GH and asks if her daughter is dying.

Franco struggles to get out of the cage.