GH Recap: Dante and Lulu renew their vows and someone gets run down

Wednesday November 23, 2016: Tracy traps her family into spending the holiday together, Julian corners Alexis about her drinking, and Nelle tells Sonny about Jax and Carly. 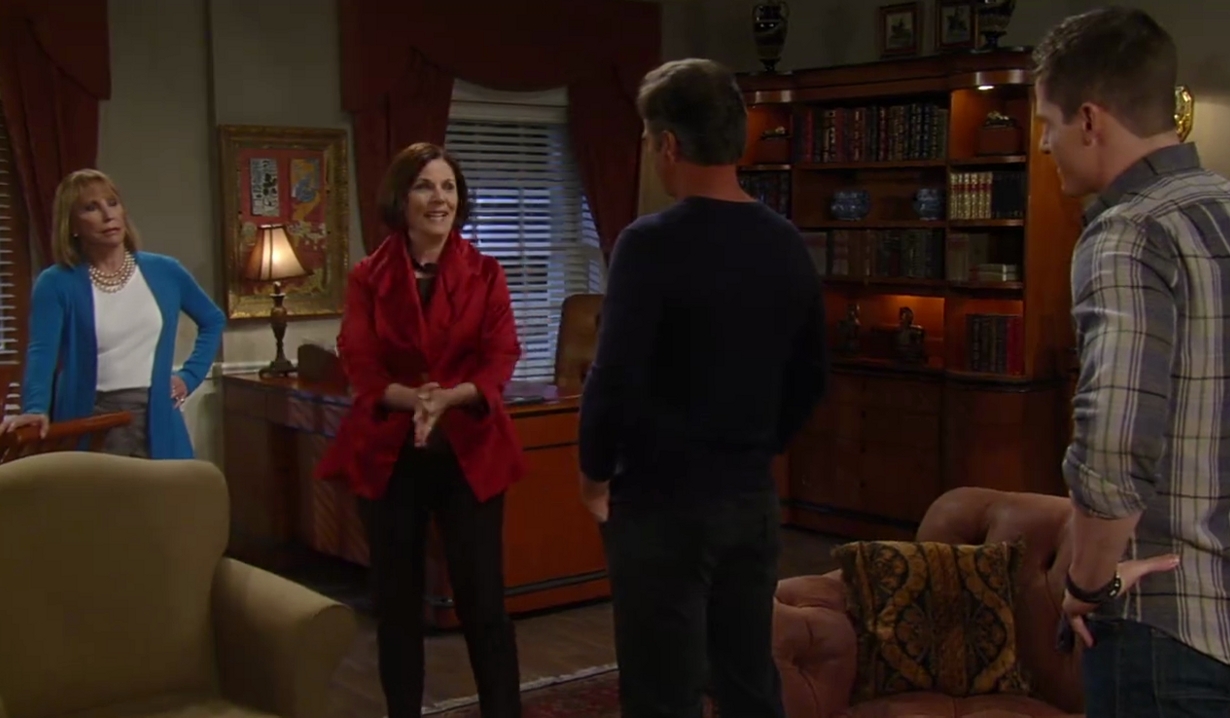 At the Quartermaine estate, Dillon, Tracy and Ned wonder who stole their stuff to get them together. Tracy swans in and says they’ll get their stuff back at the end of the festivities. She lectures them for trying to escape and promises them turkey. Everyone starts drinking. Tracy suggests a boardgame. They think this is creepy. She rants and gives them their stuff back. Her kids decide that coming together is the right idea. Everyone hugs. They sit down for turkey. Monica realizes that it isn’t covered in brine but Finn’s bacteria. She grabs the pizza menu. As they wait, they each give thanks. The pizza arrives and they sing. Ned puts a slice beside a photo of Edward.

Kevin arrives at Dante and Lulu’s. Maxie and Lulu notice that Laura isn’t with him. Laura calls to say she’s on the way. Sonny calls Dante to check in on his grandson. The cop offers to bring him dinner but Sonny thinks Lulu would have their heads. Dante reminds him that they are family. His father insists on staying home alone. When he gets off the line, Lulu starts bickering with her husband. Maxie asks if they are breaking up again.

More: Where are they now? Ricky Martin engaged to Jwan Yosef

Carly wanders down her steps and discovers that Nelle, Michael, Joss and Jax have set out Thanksgiving food for her. She sobs. She forgot all about this. Jax made stuffing. Olivia drops by. She’s surprised that Carly isn’t with Sonny. Carly fills her in on Sonny being not guilty, but she’s still not okay with him. Liv is sure that he will change for her. Jax makes his presence known so Liv takes off. When Nelle tries bringing Carly her ringing phone, she spots them in an embrace. She hears Carly admit she might not be being fair to Sonny. Nelle is about to run off when Michael catches her. She claims she needs to see a friend and takes off. Meanwhile, Jax warns Carly that everything Sonny touches turns to dust. When the family gather again, Jax tells them how thankful he is for them. Joss thanks them for being her heroes. Carly imagines Sonny there. She snaps out of it. When the kids leave to get pie, Carly admits she doesn’t know how she feels about her husband.

Alexis isn’t thrilled when Julian tracks her down at the bar outside of Port Charles. She reminds him that being in her space violates a court order. He threatens to call Sam and tell her she’s drinking. They bicker about her drinking. Alexis asks him to keep it between them. When he offers to listen to her problems, she throws his phone across the room. As he looks for a phone to borrow, she runs out to her car. She locks herself in as he chases after her. She revs up and runs him down.

Laura shows up on Sonny’s doorstep and gives him a hug. They talk about how all the good things in life just remind them of what they’re missing. She’s sure that his family will come back and urges him to let them in. After she leaves, he drinks alone and thinks of Carly. He tries calling and leaves a message, telling her how lucky their children are to have a mom like her. Later, Nelle arrives. Smirking, she tells him that Carly has been leaning on Jax. He gets upset and demands more information. She blurts out that she saw them kissing.

Laura arrives at Lulu’s, where Maxie begs her to stop Dante and Lulu from breaking up. The couple announces they are getting married. Kevin got himself ordained so they can do it now. Olivia arrives to hear the news. The couple get dressed and everyone gathers around them. Lulu has learned so much since their first wedding and she’s determined to love him and their son. They finish their vows and exchange rings.

An encore of the Thanksgiving episode from November 26, 2014 will air on Thursday. Read our GH Recap: Pizza again to revisit it.