Friday November 18, 2016: Sonny makes a decision about his plea, Jax offers to stay in Port Charles for awhile, the judge rules in Charlotte's case, Franco apologizes to Sam, and Liz confronts Tom Baker. 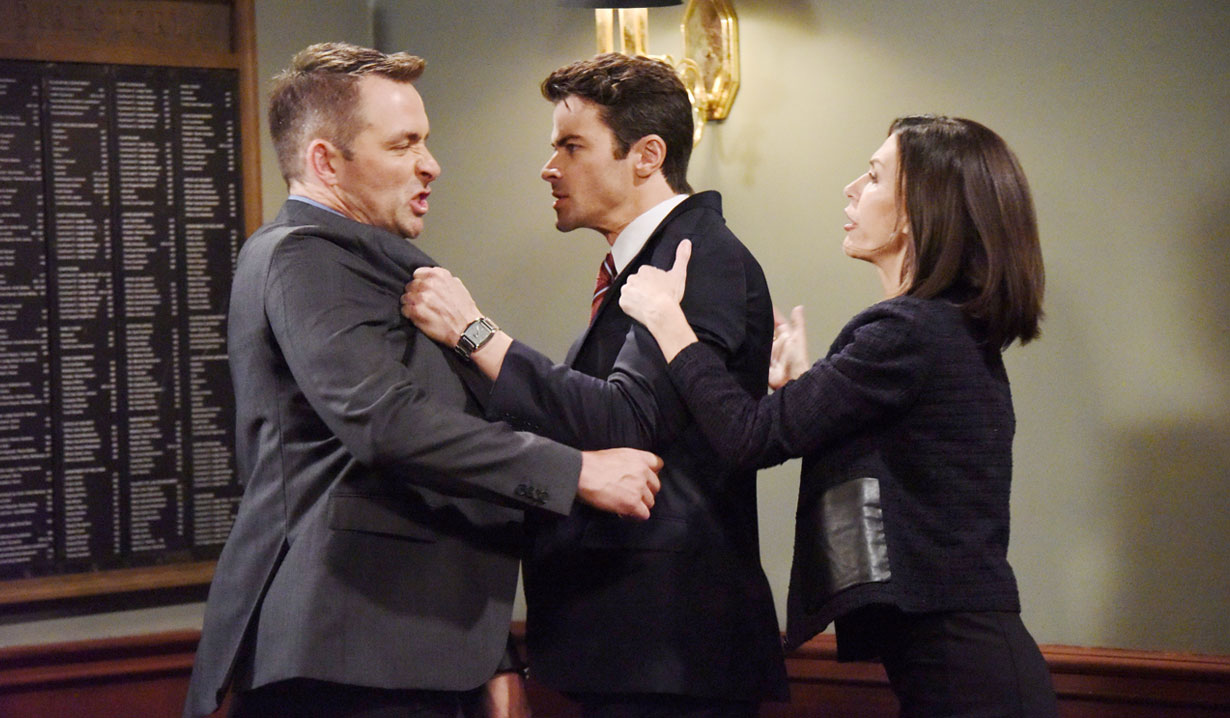 At the courthouse, after more debating, the judge leaves to ponder her decision about Charlotte’s custody. Griffin and Valentin argue about Claudette, and Valentin doubts either one of them will ever see Claudette again. This prompts Griffin to attack Valentin and accuse him of doing something to her. The judge returns to their fighting and orders them to cease. She finds that Charlotte has bonded and feels secure with her father, so she awards custody to Valentin. She also orders Valentin to stay in New York, and allows Griffin to say goodbye to Charlotte. Griffin tells Charlotte that he will always be here for her, and they hug. Meanwhile, Anna warns Valentin that she will find out the truth about him. He tells her to, “open her eyes,” in Latin, which rattles Anna. Valentine leaves with Charlotte, leaving Anna stunned.

Curtis meets with Julian at the Metro Court to discuss the investigation. Julian is interrupted by some phone calls, and later tells Curtis that since Sonny has confessed there is no reason for him to continue investigating. He fires Curtis, but gives him two weeks’ severance pay.

At GH, Franco runs into Sam and apologizes for what happened in Hawaii. He knows there is no excuse for what he did, but he hopes one day she can forgive him. She tells him to go to hell and thinks he is playing a game. Sam soon realizes this is about Liz, and tells him he’ll never be a better man for her as he is sick and always will be.

Outside of Kelly’s, Tom swears to Liz that he didn’t know she’d be here, but they do have unfinished business. She pulls out pepper spray, but he swears he isn’t here to hurt her. Tom promises all he wants to do is move on with his life, and she didn’t have to send her boyfriend after him to beat him up. She says Franco didn’t touch him, but Tom swears he chocked him and threatened to torture him. Tom promises he isn’t a threat to her, but Liz says he always will be a threat to her given what he took from her.

At Carly’s place, Joss asks her father to stay in Port Charles, and since he doesn’t have much work right now he agrees. Joss runs off to do some homework. Jax and Carly begin to reminisce about old times, and Jax gets Carly to laugh. He’s glad to hear her laughing again, and tells her it is time to stop feeling guilty. Carly doesn’t know how to get over Morgan’s death. Jax holds her and says they can figure it out together. Joss sees her parents together and seems pleased. She asks them for help with her homework, a book report on “Pride and Prejudice.” It’s clear to her parents what her game is though, that she’s trying to pair them back up. Later, Carly reflects on her past with Jax and tells him it was one of the happiest times in her life. She wishes she had fought harder for them, and the two kiss.

At the PCPD jail, Sonny dreams of Carly visiting him, and wakes up to see Jason there. Jason is working to find out who planted the bomb in Julian’s car, and begs Sonny not to do anything at his arraignment hearing he can’t take back. Jason is told his time is up, so he quickly asks Sonny about Oscar Jessup, who may have planted the bomb. Sonny recognizes the name as a man who did a lot of work for the Jeromes. Later, Diane arrives to meet with Sonny before his hearing. He shocks her and reveals he won’t plead guilty today.

Jason meets up with Sam at Kelly’s and sees she is upset. She fills him in on her run in with Franco, and she doesn’t know what Liz is thinking getting involved with him. They change the subject to Sonny’s case. Suddenly, Spinelli calls Sam with what he’s found about Oscar Jessup. Oscar has been dead since 1990.

Back at GH, Liz confronts Franco and asks if he attacked Tom. Franco admits he did. She tells Franco that he must let this go, otherwise Tom can call the police on him and send him to jail. He agrees, but later asks an IT staff person at the hospital about breaking into the cloud and tracking someone’s cellphone GPS.

Over at the Metro Court, after Curtis leaves Julian, Julian gets another call. He tells Jessup that he got rid of Curtis, and he’s done everything Jessup has asked for months. Julian asks when this will end. On the other end of the phone we see a man in a red shirt listening to Julian’s words.

Curtis visits Hayden and asks her what is going on with her.

Tracy tells Finn that she knows why he lied.

Jason worries to Sam that they may be too late.

Michael and Dante meet Sonny at the station to support him.

Nelle asks Kiki if she thinks Jax and Carly would ever get back together.

Jax tells Carly they should stop, but Carly doesn’t want to.

GH Recap: Sonny is arraigned, and...