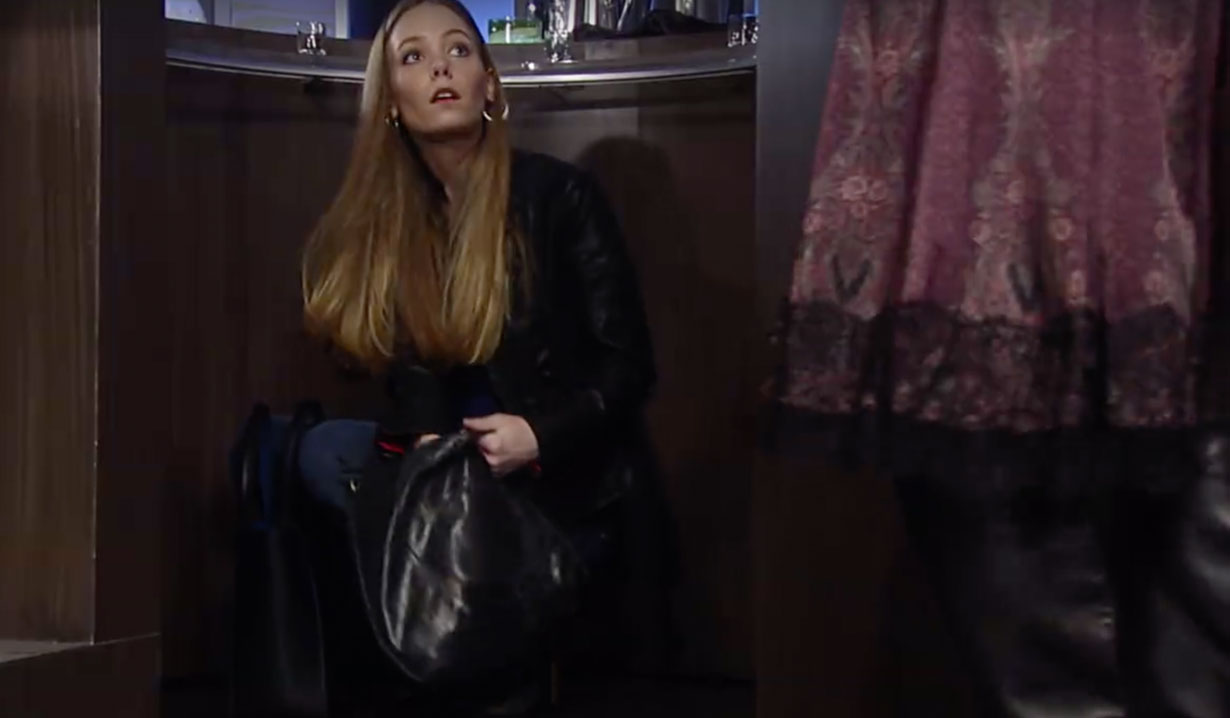 It’s a new day in Port Charles. Carly arrives at the Metro Court and talks with Nelle. Michael walks up and sees Nelle is reading about chess, and she teases him that she’s preparing for a rematch. Carly warns Nelle that Michael is a master at the game. Carly sends Nelle off to take care of some things, and asks Michael what is going on between them. He says they are only friends, and Carly reveals she would be okay if they became more than that. Meanwhile, Nelle ducks behind the bar and looks through someone’s purse and takes out a wad of cash. Bobbie arrives, sees this and quickly accuses Nelle of stealing from Carly. Carly however tells her mom that she asked Nelle to take the money from last night’s bar receipts and deposit it in the bank. Carly takes her mom aside to scold her, but Bobbie can’t shake the feeling that something is up with Nelle. Carly asks her mom why she is here, and Bobbie reveals Monica has asked her to come back to work at GH. Carly is thrilled for her mom. Nelle and Bobbie end up apologizing to one another before Bobbie heads out. Nelle leaves to make the deposit, and Michael and Carly wonder why Bobbie seems so against Nelle. As Nelle is leaving in the elevator she says to herself, “That went well!”

Jax returns to the Floating Rib as he left his credit card there the night before. He learns Alexis left with some other guy and they went to a motel across the street.

Alexis wakes up in a seedy motel room and hears the shower running in the background. She grabs her clothes and remembers meeting Tom Baker the night before. As she dresses, memories come back, including throwing back a lot of drinks. She shouts to the person in the bathroom as to whether they are okay, but there is no answer. Alexis finally enters the bathroom, but nobody is there. She flashes back to Tom telling her about a run in with Franco he had earlier. She began to laugh about Franco, and Tom started questioning her as to their connection. He eventually got spooked and left her at the bar. Suddenly, the hotel manager shows up banging on the door, as the water running all night has caused damage to the downstairs rooms. As he tends to the bathroom, Jax appears to check on his ex. Alexis admits she drank too much and came here to sleep it off, but she is good now. The manager reveals she flooded the whole bathroom and owes him a lot of money. Jax feels Alexis needs an intervention, and takes out his phone. She threatens to tell Joss and Carly about his involvement in Nelle’s kidney deal if he calls her daughters. He backs off, but not before telling her to pull herself together. Jax leaves, and Alexis gets a text from Diane letting her know that the ethics committee is going to review her suspension after the first of the year.

At GH, Franco finds Liz, who is furious with him for lying to her and going after Tom. She fears Tom may have planned to steer clear of her, but now Franco may have riled him up. She also is disappointed that Franco lied to her, and wonders if she can trust him. He apologizes, and she wants them to be totally honest with one another. Franco swears to never lie to her again.

Anna, Valentin and Griffin meet in a judge’s chambers to decide custody. Anna presents an abundance of evidence against Valentin, including a letter from Claudette and her mother. The judge is troubled by everything Anna details. However Valentin points out that Charlotte is his daughter, not Griffin’s nor Anna’s, and that he has been cleared by the Greek authority system of all wrong doings. After much bickering, the judge decides that she should hear from Charlotte. When the judge asks Charlotte who Valentin is, she calls him papa.

Elizabeth heads to Kelley’s where she finds Tom Baker waiting outside for her.

Elizabeth heads to Kelly’s where she finds Tom Baker waiting outside for her.

Joss asks her dad if he thinks Carly will go back to Sonny or not.

Franco tells Sam that he wants to apologize to her.

Griffin wants to know what Valentin did to “her.”