GH Recap: Paul feels a sense of relief while Michael vows to get justice

Tuesday October 4, 2016: Ava visits Paul in jail, Morgan continues to spiral out of control, Charlotte makes an admission to Griffin, and Nina makes Nathan and Maxie an offer. 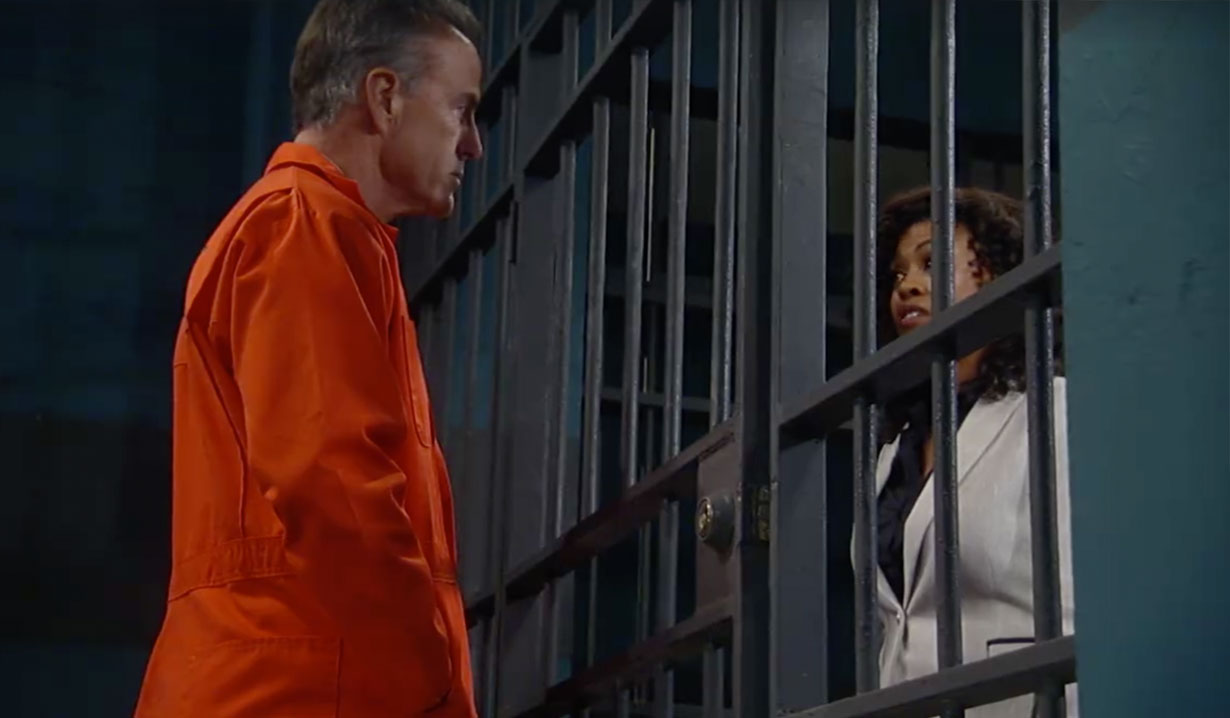 Morgan arrives home after being out all night, and claims to his parents that he was studying for a test with some friends. Morgan heads up to his room to shower, and Sonny gets a call from the university to inform him of Morgan’s expulsion. When Morgan comes back downstairs his parents confront him. He claims he’s not getting better and he’s never going to be better. He rushes out, slamming the door behind him, and Sonny advises Carly to give him time. Carly worries, and Sonny tries to assure her that Morgan will have a happy and healthy life.

Claudette runs into Griffin at The Floating Rib, which she promises is a coincidence. He asks her to join him and tell him about her troubles. She explains she’s been running from Valentin, who she got mixed up with after Charlotte was born. It was a hard time in her life and Valentin was her knight in shining armor at first, but quickly turned into her worst nightmare. Valentin was a master at manipulating her and threatened to kill her and Charlotte if she ever left. Claudette opens up to Griffin and says she always knew Charlotte was Nathan’s, but she wishes Griffin was her father. They continue to talk, and Griffin makes her realize she has to let Nathan meet his daughter.

Spoiler Video: Many in Port Charles are out for blood

Jordan visits Paul in the PCPD holding cell and calls him a bully and the lowest of the low for what he’s done. She leaves as Scott and Ava arrive, and Ava introduces Paul to his new lawyer. Paul plans to represent himself. Scott laughs and heads out. Paul thinks Ava is after something, and she admits she wants the flash drive. She plays on their similarities, that they’ve both done horrible things to protect their children. Paul tells Ava that being caught has been a relief as he believes he needs to be punished. He feels the same may be true for Ava. Ava begs Paul not to send her to prison.

At Maxie and Nathan’s place, Nathan tells Maxie that he’s confirmed Valentin is still in jail, so he thinks it is safe to see Charlotte. She tries to make him see that they need more definitive proof that Charlotte really is his, but all he’s focused on is seeing his daughter and letting her know how loved and wanted she is.

Curtis meets with Nina at the Metro Court. She’s decided to adopt a foreign baby and asks him to broker the deal. He tells her that he can’t help her as what she is asking is highly illegal and difficult. Nina becomes upset and says she’ll do it herself and storms off. Meanwhile, Nelle sits at the bar making calls to get tickets for Shawn Mendes for Joss’ birthday. She talks with Kiki for a bit when Michael comes in looking down, and he relays the news about Paul. Kiki is stunned and leaves to call Dillon, and Nelle tries to comfort Michael. Michael vows to get justice for Sabrina. He leaves, and Nelle calls Sonny to warn him about what his son may do. Meanwhile, Kiki leaves Dillon a message just as Morgan walks in and overhears. He lashes out at her for being there for Dillon, but not her own boyfriend. He explains he’s been expelled, and when she becomes concerned, he blows her off as he thinks her sympathy is phony.

Nina drops in on Maxie and Nathan at their place to discuss the wedding plans. Maxie and Nathan break the news about Charlotte to her, which has sidelined them from thinking about their wedding. Nathan wants to bring Charlotte to live with them, but Maxie doubts Claudette will allow that. She also reminds him while Georgie has visited, they’ve never taken care of a child on a day-to-day basis. Nina agrees and offers to take Charlotte for them.

Curtis turns up at the PCPD to give Jordan a lotto ticket, which was their old tradition when one of them cracked a case. Jordan reminds him that he was a big help, and he asks if she might consider giving him a second chance. She reminds him that his drug habit is what cost him his job as a cop in the first place. They argue, and she tells him that all he had to do was go to rehab as the brass wanted, but he refused. Jordan won’t hire him as the damage is done and she doesn’t trust him. He leaves and Jordan goes back to the cells to inform Paul of his arraignment date. Ava is still with Paul, and Paul tells Jordan he has something to tell her.

Today’s episode was dedicated to the late Agnes Nixon.

Sonny begs Michael not to throw everything away over Hornsby.

Paul tells Jordan that what he has to say will impact many people.

Tracy lashes out at Kiki and lets her know she isn’t the girl that will help Dillon get through this.

Ned returns to Port Charles to check on Dillon.

Carly cries to Dante, “If you think you can do better, then be my guest.”

Andre asks Morgan if there is a good reason he’s risking his life.