Heather reveals Hayden’s paternity and Liz is in danger

General Hospital recap for Monday August 29, 2016: Lulu asks Robert for a favor, Ava recognizes the coin, and Hayden confronts Liz about her diamonds. 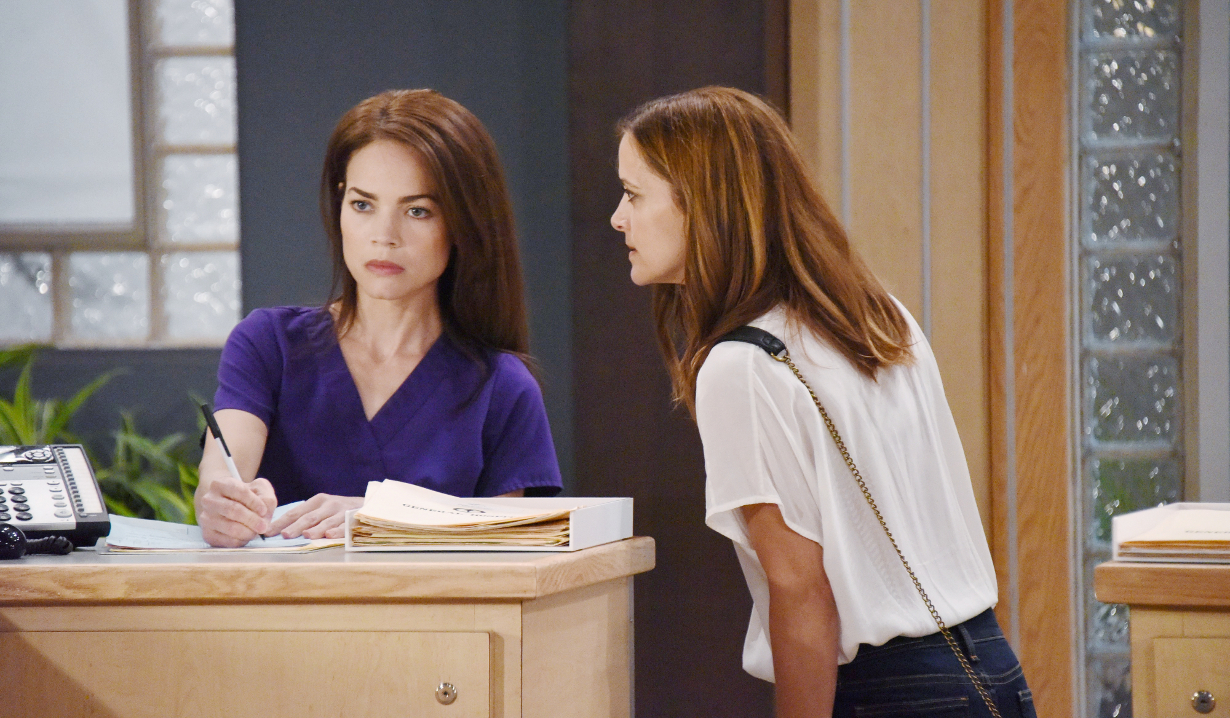 At their new place, Dante overhears Lulu arguing on the phone, demanding some answers about the Crichton-Clarke explosion. Robert shows up to assure Lulu that her father is far from dead. She skims over what her father went through before he left. They discuss Valentin and wonder if he’ll take up the vendetta against the Spencers. Lulu asks Robert to look into whether anything survived the explosion. Things get uncomfortable. She may have left an embryo there. He offers to dig into the records. Once he’s gone, Dante assures his wife he’s with her no matter how things turn out.

In the Metro Court dining room, Ava warns Hayden that Liz plans to hand her over to the Feds. She’s got the diamonds. Ava suggests she stay low and take a bus out of town. Hayden is sure Liz hasn’t turned the diamonds over yet. She stalks off.

At the prison, Heather explains to Franco that Naomi pays her to keep quiet about her past with Jeff. She won’t let him know the why or the where, just the source of the money. He probes. She admits that she stalked Jeff and discovered he had a secret relationship with Naomi while married to Liz’s mother. She broke into Naomi’s apartment and found a positive pregnancy test. Heather says there were three Webber girls and Jeff doesn’t know about the third: Hayden. After she confronted Naomi, she agreed to keep her secret for cash. Franco leaps up, eager to tell Liz. His mom forbids it but he leaves.

Spoilers! Who will destroy Nina’s hopes?

Andre drops by to see Jordan and hands her a book on collectible currency. She wonders why he’s so invested in this. He’s just a collector. That gives her an idea. When Andre leaves, she calls Ava over. When the Jerome arrives, she’s startled when the commish brings up a murder. Jordan explains she wants her help on a case. Since she runs a gallery selling antiques, she shows her the coin. It looks familiar to the blonde, who explains there was a big market for them a few years ago. She’s also sure she saw someone wearing them. Jordan’s had the same feeling. As Ava walks off, she flashes back to seeing the cufflinks on Paul.

At the hospital, Liz calls Jordan to tell her she stumbled on some evidence. She offers to come by when her shift is over. Finn asks her why she’s planning to visit the police. She covers. He was just wondering if she had a lead on the killings. The doctor chases down Monica and says he wants to file a complaint against Obrecht. She talks him out of it. Meanwhile, Andre goes down the hall to see patient. Moments later, there is beeping and Monica and Finn race down to find Andre trying to keep the patient alive. That fails. Andre explains he grabbed his chest and died. Monica sends Liz to call the cops. Paul soon arrives. Monica, Maddox, and Finn fill him in. He gives them permission to run a blood test and asks Andre to stay there. He threatens to talk to Jordan. Paul asks him to just stay there. Down the hall, Hayden shows up at the nurses’ station and confronts Liz, demanding her diamonds back. Liz taunts her. Hayden lectures her for being a hypocrite and nearly getting her killed. She blames her for Nikolas’ death. Finn spots them just in time to see Hayden slap her. He gets between them. Liz storms off. She goes to Monica’s office and finds Paul there. He claims he’s just filling out paperwork. When she leaves, he reveals that he’s wearing gloves and has a syringe. Liz heads out as Franco arrives and begins searching for her. When the elevators aren’t working, she goes down the stairs as Paul and Hayden separately go in search of her. Back down the hall, Monica gets confirmation that the patient died of natural causes. The power goes out. In the stairway, Liz fumbles with the light on her phone then someone shoves her down the steps.

Monica and Finn fight to keep things together when the hospital loses power.

Someone gives Nathan and Maxie some much needed advice.

Nina has some news for Claudette.

Hayden learns Liz has her diamonds,...