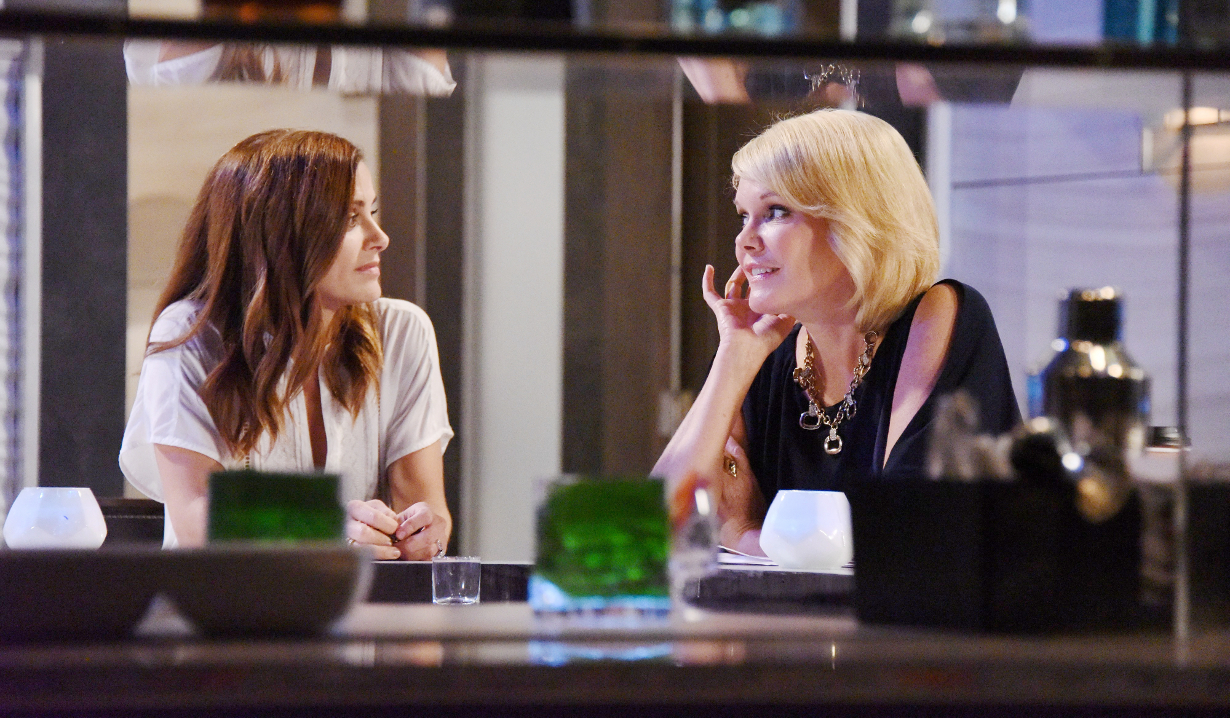 Sonny is at Alexis’ barking that Julian could go free. She insists that she doesn’t need witness coaching from him. He wonders what she’s going to do about their daughter being smeared all over the media. She assures him it was a misunderstanding and she will testify against Julian. He advises her to stay on her game. After he exits, Kristina arrives and tells her mom that she was right. Parker was just using her and has gone back to her wife. Kristina sobs about how lost she feels. Her mom feels the same way.

Ava pays her brother a visit at the jail. He’s accepted that he’s going to prison. She didn’t think he was a quitter. He’s sure Paul is using him to cement his reputation. Ava gives him a pep talk and walks out. Sonny shows up. “You’ve got one chance to save your life,” he says, suggesting Julian plead guilty or die in prison. Julian insists he’ll be acquitted and he’s sure Alexis will protect him.

Hayden is having dinner with Naomi at the Metro Court. Naomi wonders if Hayden is coming back to the city with her. Hayden has no reason to stick around. Naomi slips off and, annoyed, takes a call from Heather. Wacky Webber wants something ‘tout suite’.

Liz spots Franco at the hospital and warns him that Monica is around. He’s not worried about ‘Demonica’ and offers her some toast with jam smiley faces. Kevin watches them from across the room as Franco tells Liz about his date ideas. The shrink drags Franco away. They sit in the office. Franco complains and then talks about his date plans for Liz. Kevin’s the last person to give dating advice. He wanders off to the nurses’ station and assures Liz that Franco is quite taken with her. She’s starting to feel the same way. They go into his office and she tells him her plans regarding Nikolas. She goes into the hall and calls Jordan, explaining that she has some evidence.

Naomi drops by the prison to see Heather. She reminds the blonde of how much she pays her to stay quiet. Heather points out it’s been a few months since she was paid and she won’t let Franco go without. “You better pay up or else,” she warns. Franco appears. Naomi exits. Franco remembers her as Hayden’s mother. He asks for a loan to fund his date with Liz. Heather’s funds are drying up. Her son offers to be her personal collection agency.

At Wyndemere, Laura flashes back to her fight with Kevin. Robert shows up. He got a message from Luke, asking him to find out what happened on Cassadine Island. She tells him the tale of the skeleton. Scorpio adds that Luke sent a warning about Valentin. He suggests she increase security around Spencer. She packs up to take the kid to boarding school. Hayden arrives and warns that Spencer won’t be happy on the other side of the way. She asks Laura to say goodbye to Spencer for her. Once she’s gone, Kevin arrives. He explains she’s taking Spencer to Europe. He hopes when she gets back, she’ll give him the chance to make things right.

Where are they now? Nathan Fillion lands role on Modern Family

Back at the Metro Court dining room, Paul complains to Tracy about Dillon being late. Dillon appears and suggests they re-schedule for ‘never’. Paul is willing to start over but his son doesn’t see the point. He gets a text from Ava. Rolling his eyes, Dillon tells him to go. Paul offers his help if he needs it and walks off. He bumps into Robert, who quizzes him about the Jerome case on Anna’s behalf. Paul assures him Julian is going away.

Paul meets with Ava at the PCPD. He offers her a deal, suggesting she bury her brother or he’ll charge her with Connie’s murder. After she walks off, Sonny pops up and asks the lawyer for an update. Paul assures him Julian doesn’t have a chance.

Ava walks into the Metro Court and sits at the bar with Hayden. The brunette asks her if Nikolas suffered. “No more than he did when he was married to you,” Ava says, warning that Liz plans to turn her into the feds. She’s got the diamonds.

Franco gets his hands on some important information.

Finn and Monica stumble onto a grisly sight.

Laura and Kevin's happiness is short...