General Hospital recap for Wednesday August 17, 2016: Molly and Kristina clash, Laura and Tracy wait for the DNA results, Lulu gets good news, and Alexis meets with the law board. 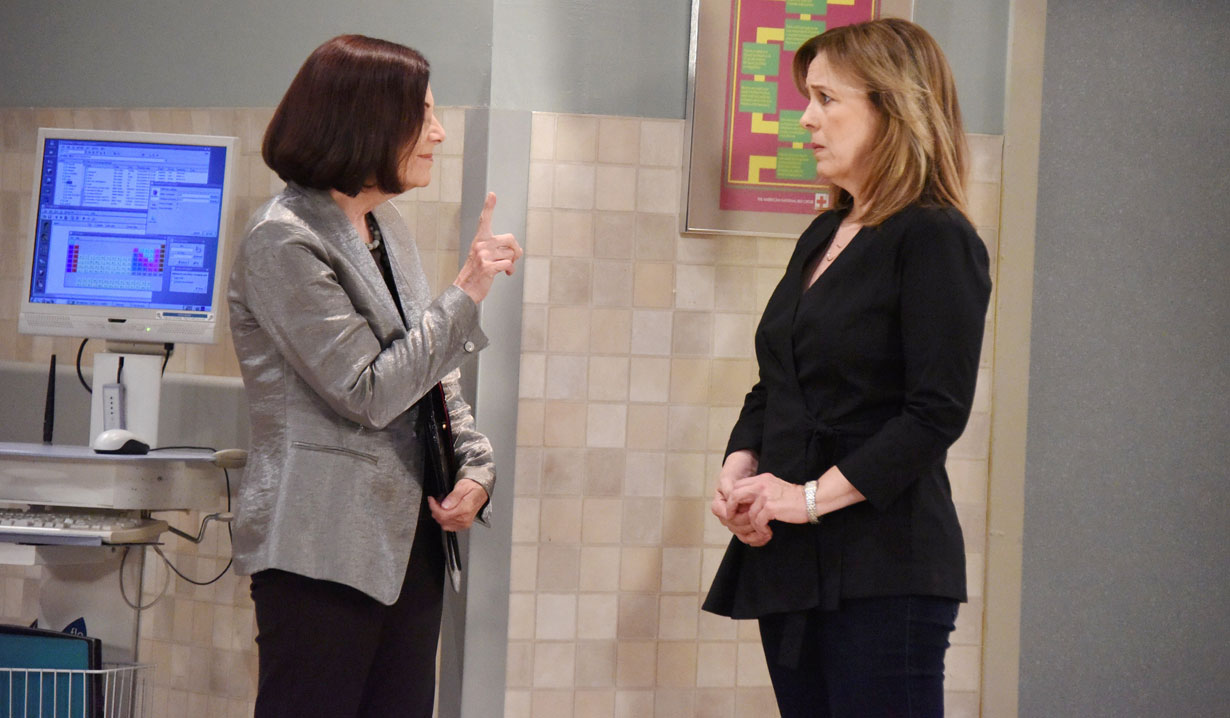 Lulu visits Dante at the PCPD and is nervous as the DNA results on the bracelet and earring she found on Cassadine Island are due in. Dante tries to help distract her, and they discuss plans for their new house. Lulu’s phone rings, and it is the hospital letting her know that she has been cleared to start hormone injections. They are going forward with the embryo implantation.

Where are they now? Khary Payton cast on The Walking Dead.

Laura and Tracy bump into one another at GH as they are waiting on the DNA tests. Both are positive the body wasn’t Luke’s, and they reminisce about him. Laura questions whether Tracy is still in love with Luke. Tracy admits she hasn’t been able to shake him yet. A lab tech interrupts with the news that the DNA tests are in, and the body is not Luke’s. Later, Tracy offers to help Laura in any way if she plans to try and go find Luke, but Laura reveals she isn’t planning to chase after him. She feels Tracy should go get Luke if she still loves him. Laura leaves to check on Kevin, and Tracy calls Luke and leaves him a voicemail. She begs him check in and let them know he is okay. Meanwhile, Liz finds Franco waiting in her car in the garage, as he had to hide there because he’s not allowed on hospital property. He apologizes to her for how he treated her and informs her that he knows what she did for him. They talk, and Liz tells him that she’s this thing between them isn’t going to work. She worries that they will continue to doubt each other and eventually hurt one another. Franco reminds her of the painting he did of her, and how he sees her as an angel as she gives him hope. He thought she could be his salvation, but she tells him that is something he needs to find in himself. He thanks her and gives her a kiss on the cheek before walking off. On the boardwalk, a drunk Kristina leaves an angry voicemail for Parker about how she dumped her. Molly storms up, grabs her phone, and throws it in the bushes to stop her sister. The two get into a huge argument, with Kristina accusing her sister of judging her and acting perfect as always. Molly informs her sister that whenever she is faced with a choice she makes the wrong one and latches onto people who only hurt her in the end. Kristina crumbles into tears, and Molly comforts her sister and suggests they go home and binge watch some TV. They leave, and in the bushes Kristina’s forgotten phone rings with a call from Parker.

Remember when… Carly and Brenda fought over Sonny

Diane and Alexis meet with the law board, who go over the charges against Alexis. As Diane is about to make her closing defense statement, Olivia bursts in to speak. The board feels this is irregular, but allows it. Olivia tells them they are being played for fools by Mayor Lomax, as she has a grudge against Alexis and that is what this is about. Olivia recounts the breastfeeding scandal, and also defends Alexis’ actions regarding Julian. The board thanks her, and Alexis asks to speak on her own behalf. She explains her own past as a Cassadine and her mother’s murder, which spurned her to become a lawyer. She reveals that while she always seeks justice, sometimes their work enters a grey area. She claims Carlos’ case fell into a grey area because he chose not to reveal certain facts about her husband’s involvement in Duke’s murder. She states they can only learn from their mistakes and do better, and she hopes she’s given that chance. The board decides to suspend Alexis from practicing for one year. They will review her conduct and who she has associated with over the year, and will make a decision whether to disbar her or lift the suspension.

Back at the PCPD, Lulu gets the news that the body wasn’t her dad. Olivia arrives to invite them to dinner and is happy to hear the news about Luke, as well as the news that they are going to have a baby. Olivia is excited and reveals that she woke up last night due to her sixth sense and felt she had a granddaughter out there, so they should prepare for a girl.

Diane and Alexis go to the Metro Court to drink. Alexis doesn’t know how not to be a lawyer, or how to tell her kids what happened. Diane tells her that she’ll get through this. Diane leaves to call it a night, and Alexis continues to drink her sorrows away.

Laura faces off with Hayden over Nikolas.

Griffin gets fed up with Claudette’s surprises.

Finn gets closer to discovering the cure for his mysterious disease.

Sam's malaria results are in and...

Valerie is attacked as she...