Finn delivers surprising news to Sam about her condition

General Hospital recap for Monday August 8, 2016: Jason grills Liz about Franco, Sam checks into GH, Bobbie celebrates her birthday, and a woman who may be Joss' donor comes forward. 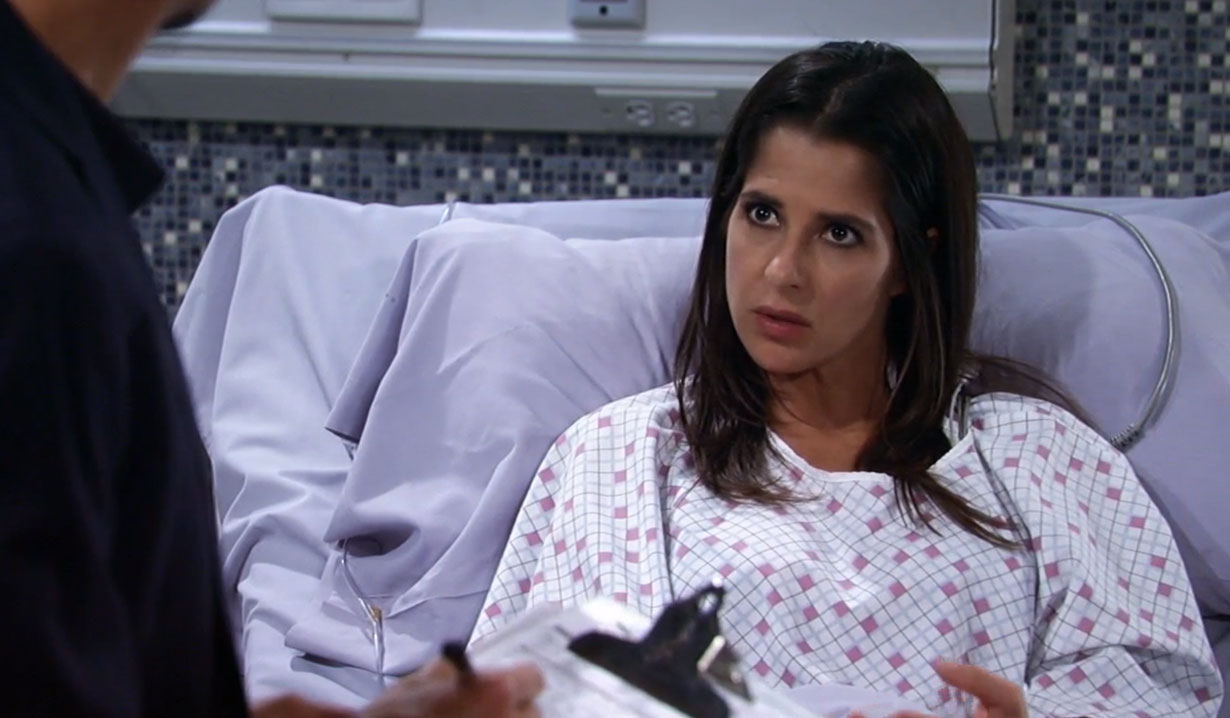 Preparations for Bobbie’s birthday are underway at the Corinthos compound. Carly vents to Sonny about Jax threatening to take Joss, but informs her husband that she’s backed off looking for the donor to convince him to stand down.

At Kiki’s place, Ava drops by to see Kiki, interrupting her and Morgan’s evening. Morgan leaves them to have space to talk. Ava isn’t pleased that Kiki is back with Morgan, and the two argue about how Ava convinced Morgan to dump her. Kiki demands her mother leave and stay out of her life. Before she leaves, Ava finds Kiki’s bottle of antibiotics and asks if Morgan gave her an STI. Kiki promises her mother it isn’t what it looks like, and explains what happened. Ava is furious that she was so careless and she feels Morgan’s lack of thinking clearly is rubbing off on her. She yells at her daughter to wise up and realize going back to Morgan was wrong. Ava storms out.

Soapbox: Just like the plane, the action on General Hospital stalled

Down by the waterfront, Jax asks Bobbie to speak to Carly about dropping the search for Joss’ kidney donor. Bobbie agrees to, but only if he comes to her party. Jason appears, and she invites him as well. Jason explains that he’ll try, but he already has plans to spend time with his son. Later, the sitter drops Jake of with Jason. Jason apologizes to his son for being gone for so long, but Jake tells him Franco helped him not be so scared and worry about him. They talk and Jason learns that Franco and Liz have been getting close.

Sam has been admitted to GH, and Franco drops by to see her and ask a favor. He wants her to watch over Jake, as Jason has a blind spot when it comes to him. Franco leaves as Liz arrives, and Sam asks Liz to make sure he never comes in her room again. The two chitchat about her trip as Liz goes over her charts. Sam tries to give Liz comfort in knowing that Nikolas died a hero, just like the Nikolas they used to know. Liz thanks her for the news and departs. Finn comes by to check on Sam, who does a double-take as he looks just like Silas. Finn asks her what the problem is that brings her here. She explains she’s fainted a number of times, which began when she was in Greece. This troubles the doctor, as he tells her that diseases are being found there which were normally not found in that part of the world. He orders some tests to find out what could be behind the symptoms. He returns later with the test results and shares the news with Sam that she’s pregnant. In the hallway, Franco gives Liz the painting he did of her as he can’t look at it anymore. She takes it with a long face and walks off. Franco goes to an exam room and begins talking to himself about how he’s misunderstood, and that all he wants is to help people. Franco’s pep-talk to himself is interrupted by a phone call from Monica, who suspends Franco from his job.

Joss and Bobbie arrive at the Corinthos place to find Sonny trying to convince Carly not to back down in her search for the kidney donor. The tension is quickly broken when Morgan, Michael and Joss all come into the room and welcome Bobbie with hugs. Bobbie opens her gifts, and Carly takes Jax out to the terrace to assure him that she’s called off the search for the donor. At the same time, a young woman arrives at the door to see Carly. She introduces herself to Michael as Nelle Hayes, and Michael assumes she’s here for the nanny position. He brings her into the living room to wait, and joins the rest of his family for Carly’s toast to Bobbie on the terrace. As the party wraps up, Michael informs Carly about her guest. Nelle meets Carly and believes she is Joss’ donor.

Liz meets up with Jason and Jake down by the waterfront. Jake runs off to get a cookie, giving Jason a chance to question Liz about Franco. She admits they went on a date, which irks Jason. She tells her ex that it was only one date and there won’t be another, so he can settle down. He doesn’t want Franco to see Jake again, which infuriates her. She suggests he pay attention to his own life and not hers, and asks if he even knows that Sam is in the hospital.

Jason asks Liz why Sam is in the hospital.

Sam can’t believe she’s having another baby with Jason.

Sabrina is shocked as she finds Joe working at GH.

Lulu tells Hayden that they have to talk about Nikolas.

Carly asks Nell why she thinks she is Joss’ donor.