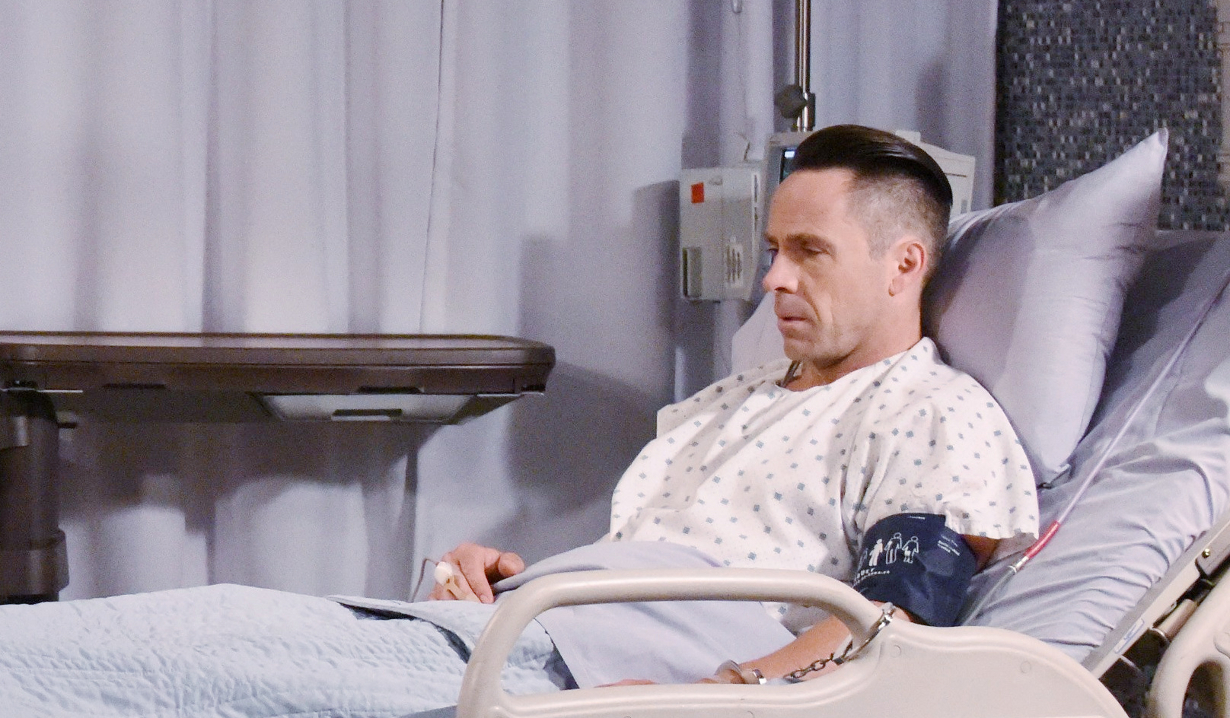 After doing the deed at her place, Dillon tells Darby it was a ‘wow’. She complains about Kiki and then asks him about his work. When she tries making out with him, he explains he needs to get back to work.

At home Kristina catches her mom on the phone to the hospital. Her mom confirms to her that she’s not pregnant and changes the topic to Parker. Once her daughter exits, Alexis looks at her wedding photo and recalls her marriage to Julian.

Kiki paces the Metro Court, reading her Twitter feed and cursing Dillon for not seeing that Darby is a skank.

Just in! Jon Lindstrom in Val-En-Tina

Carly runs into Morgan at the coffee shop. She wants to talk about his first day at work but he wants to discuss Kiki. After he plods off, she bumps into Kiki and starts questioning her about how over Dillon she really is. Carly tells her how much Morgan is counting on her. Dumping him could destroy all the progress he’s made. Kiki insists she’s not leading him on. Carly walks off. Kiki sighs. Morgan pops up and Kiki asks him if they can cancel their plans. He’s already reserved them a room at the Metro Court. She’s not sure she’s ready for that and reminds him about the last time they were together. He promises that he won’t freak out if his meds inhibit his performance. She’s also scared that she can’t feel the way she did before. He knocks over a cup and starts to ramble about being a screw-up. She makes him stop with a kiss.

Sonny drops by at the hospital and asks Felix to let him see Julian. The nurse doesn’t think so but tells him Julian is in bad shape. Down the hall, Julian coughs and Carlos appears. The apparition taunts him about going back to prison. He suggests that Julian overdid it on the meds and could be headed for the grave. His machine starts to beep and Felix rushes in to check him over. Sonny stares in, drops an insult and leaves. Once Felix leaves, Carlos returns and taunts Julian some more. “You have to kill Alexis,” says the vision. Julian wishes he could undo everything that happened. Meanwhile, Sonny runs into Alexis by the elevators. She’s brought divorce papers. Sonny’s impressed. When she gets to her husband’s room, she finds him mumbling about how much he loves her.

Where are they now? Jimmy Deshler in Riding Faith

Carly spots Dillon in the Metro Court restaurant and starts questioning him about Kiki. He assures her that things have cooled off between them. Darby shows up, hands him his shirt and plants a kiss on him. This puts a smile on Carly’s face and she happily heads off. Sonny joins her at the bar and she fills him in on the Morgan and Kiki situation. He advises her to mind her own business. It’s too late for that. She gets a text about the kidney. Upstairs, Kristina shows up at Parker’s room. She tells her she’s moving on with Aaron. Parker tells her it’s her journey and she hopes that she’s smart about her future. Kristina notices she’s not wearing her wedding ring. Her professor admits that her marriage is over but assures Kristina it wasn’t her fault. She tears up and feels like a failure. Kristina is confused too. They make out, tear off their clothes and jump into bed. Down the hall, Morgan and Kiki leap into bed. When she takes her top off, he notices the scar from her gunshot wound. That ruins the mood for a second. She claims it’s just a reminder of what they can get through together. They strip down and do it. After sex, she stares off.

Sabrina is surprised to see Michael at the Quartermaine’s. He found her lease application and wonders when she was planning to move out. She explains that she doesn’t want to run away, but she feels like she owes him his space. Taking her hands, he says he doesn’t want her to move out. She’s what he wants. They kiss. He gets a text and has to go to the office. She promises that she and Teddy won’t be going anywhere. Once he leaves, she has a surprise guest.

Carly is vigilant in her quest to find Josslyn’s kidney donor.

Someone's shot during a struggle

Michael does a double-take when...