Someone’s shot during a struggle

Summary for Tuesday July 19, 2016: Nikolas faces a difficult decision, Andre is put off by Jordan’s independence, and a problem arises as Alexis prepares for Julian’s hearing. 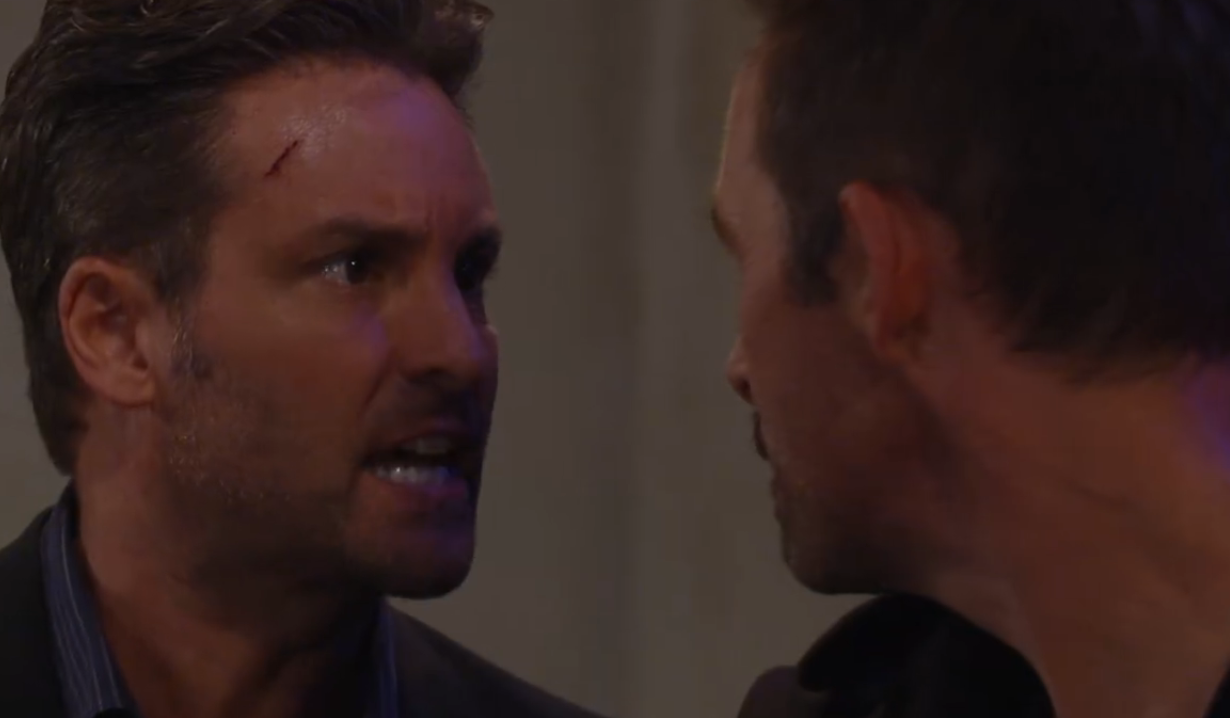 Diane arrives at Alexis’ to take her to the arraignment. She’s forgotten and grabs her purse and pregnancy test. Diane sees it and asks, “Are you pregnant?” She’s not and Diane thanks God but understands how the situation has stirred up some feelings. She loved him and felt it was real. Alexis is certain it was just hot sex with a raging sociopath. Diane can’t listen to it and snaps, “Like a bad pair of shoes self-pity looks horrible on you.” She promises not to judge her but Alexis isn’t grieving, she only feels a desire to take him down. Diane concurs the less nostalgic Alexis feels, the better. They hurriedly leave at the commissioner’s request to see Alexis before the hearing.

At GH, Griffin thinks Julian’s recovered from his stab wound and can be released for his arraignment. Griffin leaves as one of Julian’s men enters and hears Julian admit he plans to stay out of prison. Julian dismisses his man so he’s not around when something goes down. Outside, Valerie is surprised to learn from Griffin that Julian can be transported. Griffin returns and reports Julian’s tests are great and he can leave. Julian starts to argue about Griffin not knowing Duke who wasn’t innocent himself. Griffin doesn’t think it gave him the right to kill Duke. Suddenly, Julian passes out and Griffin calls for help. When Julian wakes up, Griffin informs him he’s not out of danger and they need to learn more.

Curtis bumps into Jordan waiting for her date at the Metro Court restaurant. She thanks him for talking TJ into reaching out to her. Curtis thinks she should give forgiveness a try but Jordan is only willing to keep it at ‘thanks’ between them. Andre interrupts in the midst of Jordan explaining that she and TJ are visiting Shawn at Pentonville soon. Curtis leaves them and Jordan explains about TJ learning the secret. Andre seems upset at not being told sooner about her issues with TJ. She’s not had a serious enough relationship to ever share her personal life with a man. He doesn’t seem to care when she’s called back to work. Nearby, Nina joins Curtis and is not surprised to hear about him running into Maxie in Claudette’s room. Curtis is surprised when Nina calls off the investigation. Nathan talked her out of it. They move on to his investigation of disreputable plastic surgeons despite him being distracted by Jordan. Nina wonders if there’s something going on between him and Jordan given he can’t keep his eyes off her. Curtis explains their history is complicated and there’s nothing between them. Nina seems excited about the prospect of him being available. Jordan interrupts them and Curtis greets her with a kiss that the two of them can’t seem to pull away from. They leave and Nina orders take-out. At the bar, Andre calls and leaves a message hoping someone is alright.

On Cassadine Island, everyone is over the shock of Valentin’s announcement of who he is. Dante wonders why they’re being held as Lulu worries about Sam and Jason. Nik demands to know what he wants while Kevin whispers to Laura that Nikolas shouldn’t be aggravating their captor. Valentin is angry about his brief mention in the Cassadine book and decides he wants it all and expects Nikolas to sign over everything he owns. Nikolas owes him nothing but is happy to ‘share’ without him expecting to hold his friends and family hostage. Valentin suggests shooting all the hostages and grabs Nina first. When Nikolas doesn’t respond fast enough Valentin wonders if he should start with Laura. Nikolas caves; he’ll sign the papers. Valentin’s glad Nikolas is reasonable and invites him upstairs to sign the papers but he’ll take Ava with them as insurance. Alone, Kevin believes there may be a chance that no one will get killed. Dante thinks one of them needs to escape. Lulu is not sure of their surroundings but Laura may know a way and describes the tunnels below the compound. Dante and Lulu take turns repeating the directions to each other. Upstairs while Valentin procures the papers, Ava warns Nikolas that he’s not needed once he signs those papers and everyone will be put at risk. Valentin is ready and can’t be bargained with to let the hostages go before signing. Nikolas signs and Valentin prepares to tie up the loose ends. Nikolas jumps him when he tries to shoot Ava. Ava screams during the struggle as Valentin gets a clear shot and shoots Nikolas. Nikolas falls over the balcony railing.

In her office, Jordan voices concern about Alexis’ demeanor in the upcoming hearing to her and Diane when a call comes in. The arraignment is postponed – Julian took a turn for the worse.

Carly asks Dillon what’s going on between him and Kiki.

Morgan surprises Kiki with a room at the Metro Court.

Michael’s surprised Sabrina is moving out.

Sonny thinks Alexis is at GH to visit Julian. 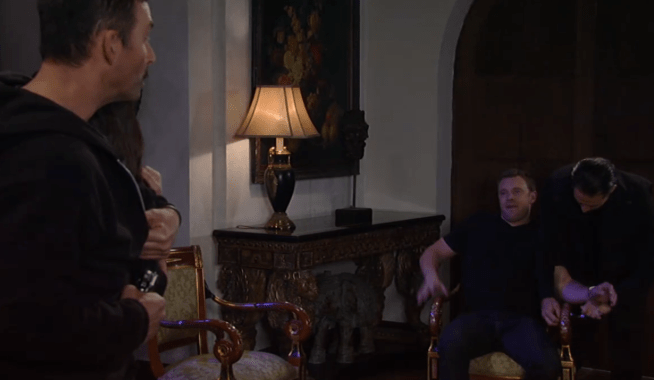 Sam and Jason are detained separately, as Theo reveals his identity 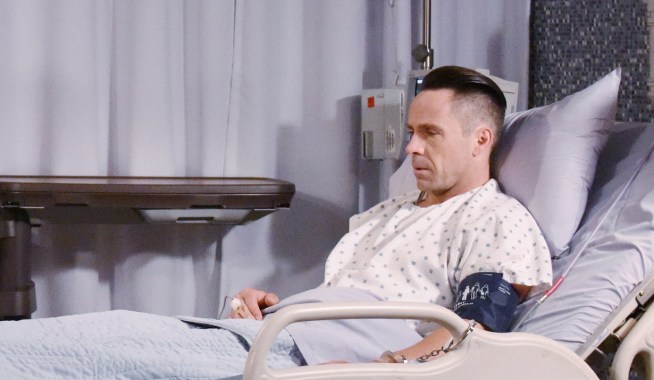