Sam and Jason are detained separately, as Theo reveals his identity

Summary for Monday July 18, 2016: Finn grasps at straws and asks Sonny for help, Kristina discovers something surprising at home, and Julian takes a verbal beating from Lucas and Olivia. 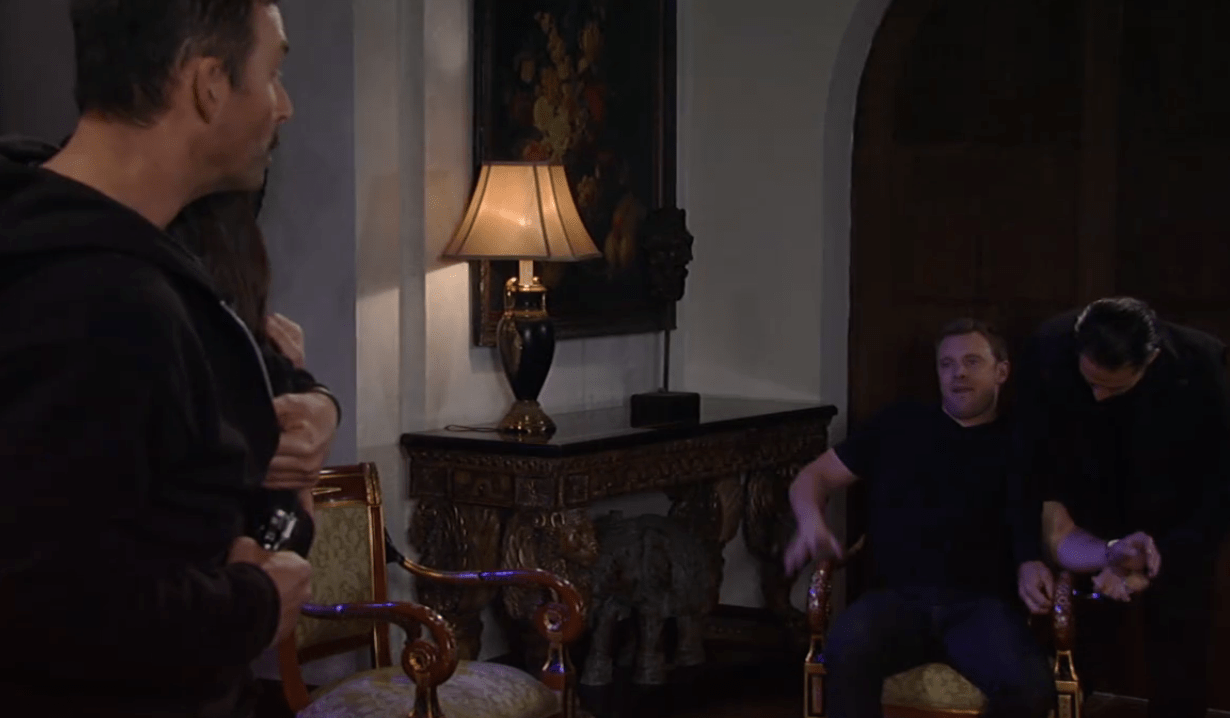 Alexis returns home and hides a pregnancy test before Kristina and Molly come downstairs. They find her and are eager to take care of her. She really thought Julian loved her but all she feels now is betrayal and she decides to give them advice to walk away from any man who is questionable. Alone with Kristina, she asks about Aaron and Parker. Kristina admits wanting to see Parker when she comes to Port Charles. Alexis advises against it, all involved will get hurt. Molly returns and Kristina steps out. Before Molly can learn what will happen to Julian, Kristina returns holding a pregnancy test wondering who could be pregnant. Alexis hasn’t been feeling well and isn’t sure. They talk her into taking the test but she agrees only if she is alone. Later she takes the test and reads the results alone.

At the Metro Court bar Finn overhears Sonny leaving Carly a message and offers to buy him a drink. Sonny thinks he wants something in return for helping Carly track down Josslyn’s organ donor. Finn is interested in pharmaceuticals not obtainable in the US. Sonny doesn’t like dealing in drugs but listens to Finn’s plea for his life. Sonny thinks he might know someone who knows someone. Finn doesn’t have time for Sonny to make up his mind about if he can help him out or not. Sonny knows Finn has no choice.

Weekly Blog: Deconstructing GH from July 11 – 15 when things take a turn for the worse on Cassadine Island

Rachel introduces Tracy to her mother Naomi in the park and asks her if she can get Tracy and her illegal drugs for a mutual friend. Naomi does have access internationally but refuses to put them in contact with her source. Rachel pleads with her mom; they owe her friend due to her father’s actions. Naomi wonders what Rachel could do for her before calling her contact. Privately she makes the call and returns with news that it’s more likely their friend is not sick, but addicted to a drug similar to heroin instead. They’ve been had.

On Cassadine Island, Theo tells everyone at gunpoint that they are his guests and threatens to put a hole in Sam if Jason doesn’t comply. His henchmen enter and tie up Jason while Theo holds Sam at close range. He has someone collect all their cellphones. Nikolas steps forward and asks Theo who he is while Ava, Laura, Dante, Lulu and Kevin look on. Theo promises all will be known later and then speaks in Greek to his men before leaving with Sam and Jason. Nikolas tells the guests that they have orders to shoot anyone that moves except for him. Upstairs Theo explains Jason and Sam are in the wrong place at the wrong time and leaves them with a guard. Jason apologizes for getting Sam into this. He remembers being on Cassadine Island before. They decide Sam will sleep after they weigh their options. Downstairs Kevin checks on Laura while Lulu talks Dante out of being a hero. Ava’s telling Nikolas she didn’t sign on for this when Theo rejoins them and jokes he neutralized Sam and Jason. Laura thinks the man is the one who sent her the photo of the Ice Princess. Laura and Lulu wonder if they should trust Nikolas’ claims that he doesn’t know the stranger. Theo assures Laura he’s not on Helena’s payroll and Lulu sees the crest tattoo on his arm. Nikolas sees it and says, “I know who you are.” The stranger confirms, he’s Nikolas’ bastard uncle, Valentin Cassadine.

Rumor Mill… Is Valentin Casadine the father of Nathan West?

At GH, Julian tries hard to pull Lucas over to his side. Lucas snaps at him and makes it clear that Tony Jones is his father. Julian is nothing to him and Lucas wonders aloud if he would have tried to kill him too if he knew the truth and wanted to turn him in. He promises not to cry for him when he goes to prison. Olivia comes in and adds she won’t either and he can never see Leo again after attempting to kill his pregnant wife. Julian’s sure Alexis was lying and Leo will hate Olivia if she keeps him from his father. Lucas and Olivia agree, Julian is dead to them and they guess he will be to Sam too. Alone he tells himself he has to find a way out.

Nikolas threatens Valentin if he touches anyone in the room.

Jordan thinks Andre is angry with her.

Nina tells Curtis she needs to call off the investigation.

Dr. Monroe assures Julian he knows he’s guilty and a jury will think so too.

Alexis tells Diane the only feelings she has for Julian is a desire to take him down. 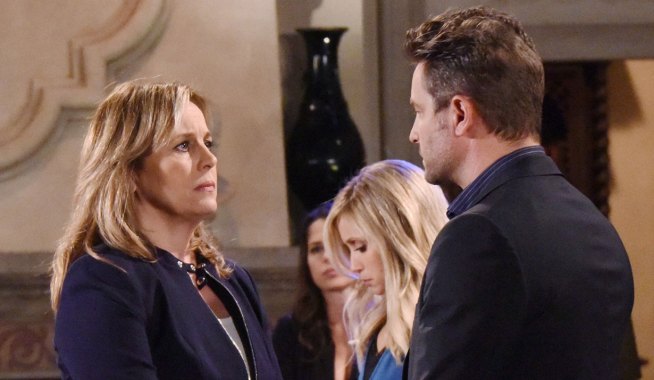 Laura realizes something else is happening on Cassadine Island

Someone's shot during a struggle