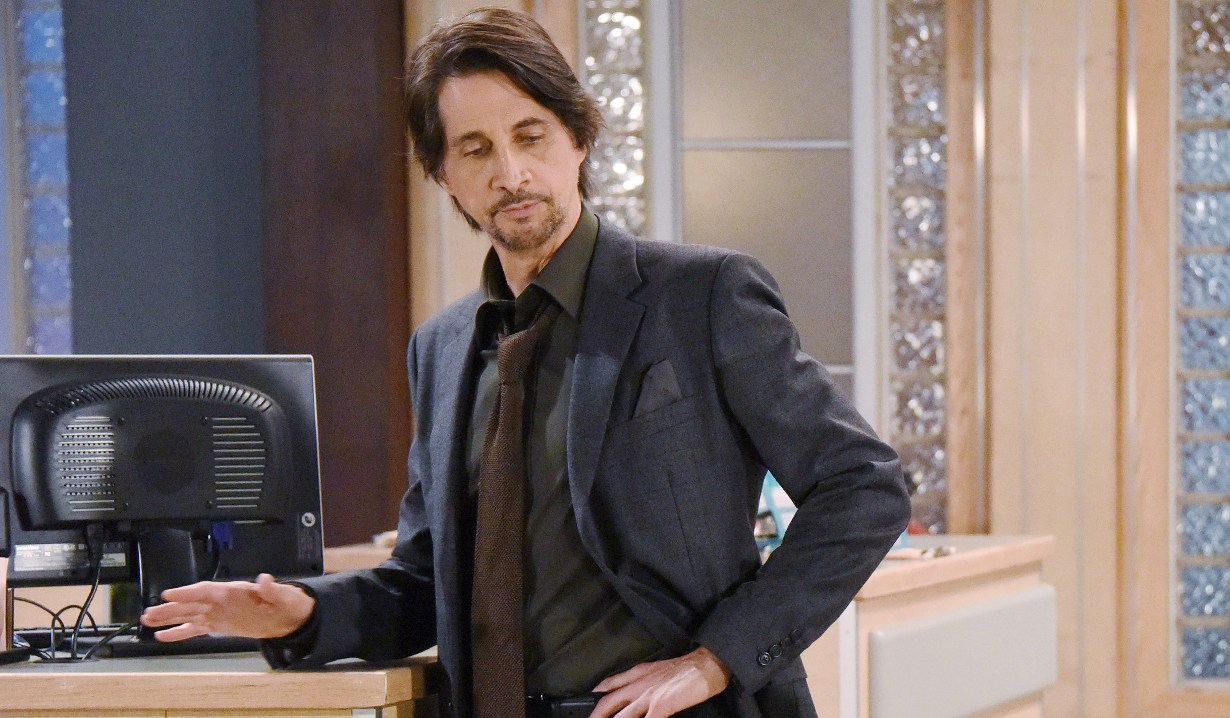 On Cassadine Island, Ava admires the millions of dollars of diamonds Nikolas has. She thinks he better start trusting her if they are going to get out of this. He explains that he ‘appropriated’ them from Hayden. Ava doesn’t see why he would have given up everything he had for some diamonds. He explains that Hayden has proof of one of his transgressions but won’t say more. Ava says she’s done unforgivable but necessary things too. Downstairs, Theo warms himself by the fire as he chats with Jason and Sam. They want to use his boat but think he should forget ever meeting them. Sam assures him he doesn’t need to worry about the captives upstairs. Theo leaps up when she mentions the prince’s name. He hasn’t seen him since he was a teenager. Jason assumes he came there looking for him. After Theo insists otherwise, Jason encourages him to go upstairs and see Nikolas. They head up. There’s some awkward small talk. Jason decides to stay up and keep an eye on them. Theo reads a book. When he lifts his arm, we see a Cassadine crest tattooed on his wrist.

Dante reads Julian the charges against him in his hospital room. Julian grunts and the cop leaves him alone. Griffin grimly tells the mobster that his surgery was a success and walks out. Anna enters. “Welcome to the rest of your life,” she says. This isn’t everything she’s been dreaming of but it’s close. The scales of justice will never balance for her. He challenges her to kill him. She claims her victory will be living free while he’s in a cell. The cop gloats about being on the other end of the wire Alexis was wearing. She compares him to Sonny, only Corinthos sacrificed his freedom for Carly. He taunts her for being a murderer like him. She claims that she’s learned from her mistakes and is done with him. After saying how much she hates him, she walks out and weeps. Down the hall, Amy is complaining over the phone to someone when Finn shows up. He’s desperate to find all of his lab research. She suggests he try Obrecht. That’s not helpful. He bumps into Griffin and asks him for help finding his research. Griffin’s not helpful and Finn stumbles off. Amy complains about him. Griffin asks if Finn is always so pale and moody. Finn goes down to his office. He tries making a call but gets no response. After cursing, he tells Roxy he’s running out of time. Back down the hall, Griffin finds Anna weeping outside of Julian’s room. She tells him her plans to go and see Robin and Emma. He’ll miss her. She’s been holding onto vengeance for too long, but feels like she has finally let it go. The doctor admits there are things in his history he’s not proud of. He wonders what his father would think of him. Anna is sure he’d love him. He makes her promise to come back.

Lulu joins Laura at the Metro Court. She explains that if she gets pregnant, she wants to name the baby after Nikolas. Laura breaks the news that her brother is alive. Lulu is overwhelmed. “He’s pretending to be dead,” her mom explains. Lulu is thrilled but furious. Her mom wonders if she should go to the authorities. Dante pops up and the ladies fill him in. Laura asks him to keep this within the family for a few days while she convinces her son to come home. The cop needs to call it in immediately and asks where the prince is. Laura tells him to go to the island with her to find Nikolas. Across the room, Hayden tells Tracy that if Finn doesn’t get his meds, he’ll die. Tracy is determined to help him. As they exit, they stop by Laura’s table to pay their condolences and then leave. Dante realizes that if he refuses to go along with the plan, the women will do it anyway so he’ll go with them. Laura slips away to call Kevin and tell him she’s going to find her son.

Tracy and Hayden show up at Finn’s door. The Quartermaine lectures him for not asking for her help. He needs a drug mule. Tracy says he’s got two of them.

Sonny is grateful that Alexis is safe and sound.