Summary for Wednesday June 29, 2016: Griffin opens up to Anna, Morgan's happiness worries his parents, and Nathan is eager to set a date. 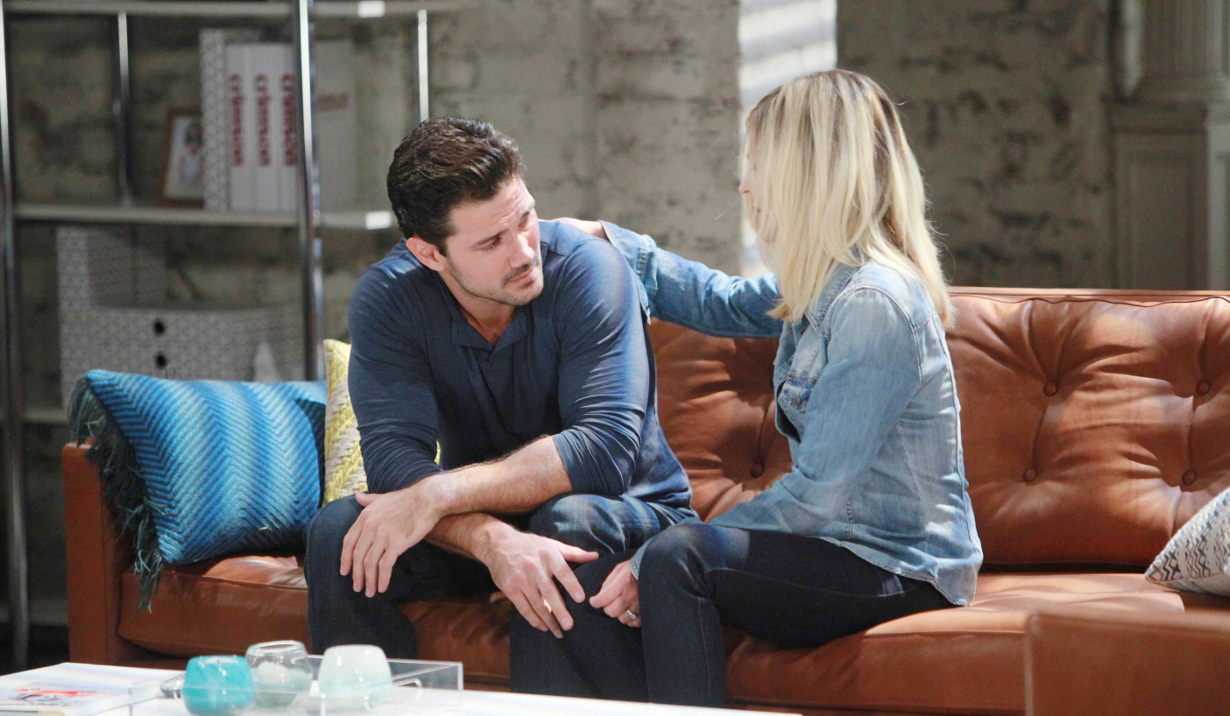 At home, Maxie holds up her dress to look at herself in the mirror. She shrieks when Nathan comes in. She hides the dress and assumes it is now cursed. She’s determined to find a new dress so everything can be perfect. They kiss and he suggests they choose their wedding date.

Anna discovers Griffin looking exhausted at the hospital. They argue about him allowing Carlos last rites. She understands his choice now and wants them to remain friends. She quizzes him about becoming a priest. He turns the topic to Nathan. She sings his praises. Griffin explains that he’s been drawn into something involving the cop and Maxie. He tells Anna that he took a break from the priesthood when he allowed a miserable married woman to seduce him. That ended horribly. They discuss her frustration over Alexis getting arrested. She’s determined Julian will pay. Griffin thinks she should move on. After she leaves him alone, he flashes back to his seduction.

Morgan surprises his mom at Sonny’s with some flowers. He giddily tells her that he hasn’t lost Kiki and never will. She’s decided to give him another chance and he’s determined not to let her down again. As he paces around, he tells her about Dillon and Kiki but it’s nothing. His mom hugs him and promises not to worry.

Kiki meets with Dillon in the park. He won’t give her up without a fight. He was an idiot for trying to step aside. He doesn’t think that she and Morgan can see how much damage they actually do to each other. She insists that she needs to be there for Morgan. Dillon thinks she deserves someone who will make her happy. The blond thinks he’s a great guy and he’ll find someone else. He thinks that she should consider an alternative to Corinthos. Being happy might be nice for a change. He leans in and kisses her as Carly is walking by. She takes off. Dillon apologizes and doesn’t want to pressure her anymore. After he leaves, Carly pops up and asks Kiki what she’s doing to her son.

At the Metro Court, Julian refuses to believe it when Sonny tells him that Alexis is pregnant. Sonny wishes he’d kept it quiet until Jerome was in the ground. Julian sneers and walks off. Morgan wanders in and tells his father he wants to work for him. Sonny offers him a job at a coffee place and reminds his son to stop relying on Kiki to keep his bearings. He rolls his eyes as Morgan talks about how she’s the most important thing in the world. Morgan assures his father he is taking things as slow as he can. Later, when Dillon walks in, Morgan corners him and tells him to stay away from Kiki.

Anna visits Sonny at his place. They discuss what will happen to Julian. He promises that he won’t be giving her anything to investigate and explains that Julian took the bait.

Alexis paces at home and clutches her belly before flipping through a family album. Julian arrives and demands to know if she is pregnant. She confirms it and they argue about her twenty minutes in the slammer. The lawyer rails at him for betraying her and vows to keep the baby away from him. She slaps him when he tries to calm her down and repeats her vow. He suggests they re-think how they proceed from now on. Julian thinks they could change some things. She wonders if that includes not letting her stand trial for his crimes. Before he’ll say anything, he pulls out a pregnancy test to get some proof for her claim.

Kiki intervenes when tensions get heated between Morgan and Dillon.

Franco and Nina have it out over their failed relationship.