Summary for Friday June 17, 2016: Sam and Jason learn Nikolas is with Ava, Huxley reveals his true intentions, Spencer leaves his father a message, and Alexis is arrested. 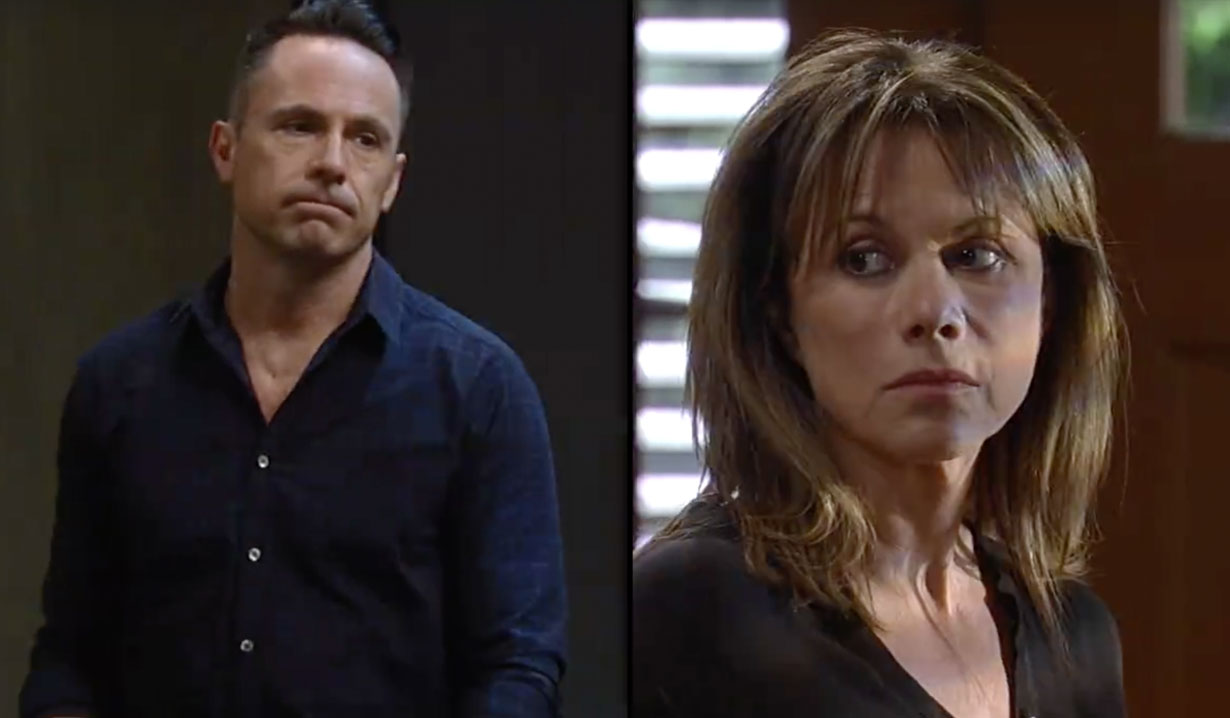 Sam and Jason arrive at the hotel in London to find Nikolas. With the help of the manager, who they pay off, they learn that he checked out and was headed to the airport for a flight to the Netherlands. However, the airline reports he never boarded it. They question the manager more and learn Nikolas left for the airport with his companion Ava Jerome.

Huxley brings Nikolas (temporarily being played by Nick Stabile) and Ava to his home and gets them settled into the blue room, named for his grandmother who mourned her dog’s death in it for a year. Nikolas insists he has a flight to make, but it turns out they are hours away from the airport, something they didn’t know as they happened to fall asleep on the way to his estate. Because fog has set in, Huxley claims it is too dangerous for them to go anywhere. They are so far out in the country that their phones have no signal, so they can’t call anyone. Huxley leaves them to get some refreshments, and Ava finds out he has locked them in. When Huxley returns, Nikolas insists they leave, but Huxley says he can’t allow that. Nikolas offers to stay if he lets Ava leave, but Huxley reveals it is Ava he is after.

Laura goes to GH to get a prescription refilled and brings Spencer along with her. They happen to run into Kevin, and Spencer figures out she set him up to be shrunk. He says he doesn’t want to talk about his father as it is best to move on given he’s lost to them. Kevin gives him some money to spend in the vending machines, so he takes off. Kevin tells Laura that Spencer isn’t going to talk until he trusts him, and he would like her to bring him in as a patient. Meanwhile, Spencer leaves a voicemail on his father’s phone and tells him that he has his back and will not let him down. Laura and Kevin continue talking, and he reveals he did some digging into the Campus Disco and found out that Lloyd and Lucy Johnson are real people and live in Port Charles. Laura doesn’t understand how it is possible, but can’t focus on the investigation right now. Spencer returns and learns Laura made an appointment with Kevin for him. He thinks he is fine, and says wherever his father is it is a better place. Laura and Kevin give each other puzzled looks. Maxie and Nina take test shots of Curtis at Crimson. Nathan is present to pose for photos as well, though complains he doesn’t have time for this. Maxie pulls him aside and tells him she also asked him to come to tell him that she loves him and she forgives him. She asks if he still wants to marry her, and he does. Meanwhile, Nina tells Curtis that she thinks he will make a great cover for their upcoming men’s issue.

At the PCPD, Anna and Paul discuss the case against Julian when Sonny arrives. He is filled in about the dagger and the police closing in on Julian. Sonny leaves, and Paul promises Anna that when Julian is arrested that she can sit in on the questioning. He tells Anna that he respects her and hopes one day she can say the same about him.

Primetime news: Nicholas Bechtel in Stuck in the Middle

Julian calls Alexis at home and tells her that he will be back tonight and he expects a warm welcome. Later, Sonny drops by to see Julian, but Alexis says he’s not here. Sonny intends to stay and parks himself on the couch because he wants to watch Julian get arrested by the police, who have evidence against him. Alexis thinks he’s lying, so Sonny informs her the dagger has blood on it. Alexis says Julian is at work, so if he wants to watch him be arrested then go there. Sonny is shocked by her change in attitude and wonders if she has finally come to terms with the fact that Julian played her and is finally going to get what he deserves.

Julian arrives at the Crimson offices to see Nina. She informs him of how the police questioned her, and while she told them he was here the night Carlos was murdered, she was a little hazy on the exact time. She didn’t tell them about the stain on his shirt, but could. Julian asks what it will take to keep her quiet. Nina tells him she wants him naked on all fours, but only for the real men issue. Nina is planning to photograph men as objects as a play on the objectification of women, and sees him as a coffee table that she’s resting her feet on. She threatens to turn him in if he doesn’t agree. Meanwhile, Nathan has to return to work, but tells Maxie to call him if Julian causes trouble.

Nathan returns to the PCPD and informs Paul and Anna that the blood on the dagger came back as a match for someone.

Back at Alexis’ place, Nathan arrives and places Alexis under arrest for Carlos’ murder.

Maxie ends up in the GH locker room with a half-naked Griffin.

Rachel looks after Finn in his room at Metro Court.

Nina asks Franco if he’d like to get naked.

Olivia asks Julian what is going on between him and Alexis.

Paul, Jordan and Anna discuss what Alexis might have to say.

Sonny assures Nathan that it is Julian they want.