GH Recap: TJ learns that Shawn is his father

Summary for Thursday June 16, 2016: Huxley insists Nikolas come to his house, Jason and Sam get a lead on Nikolas, Rachel questions Finn about his health, and Curtis wants to become a cop again. 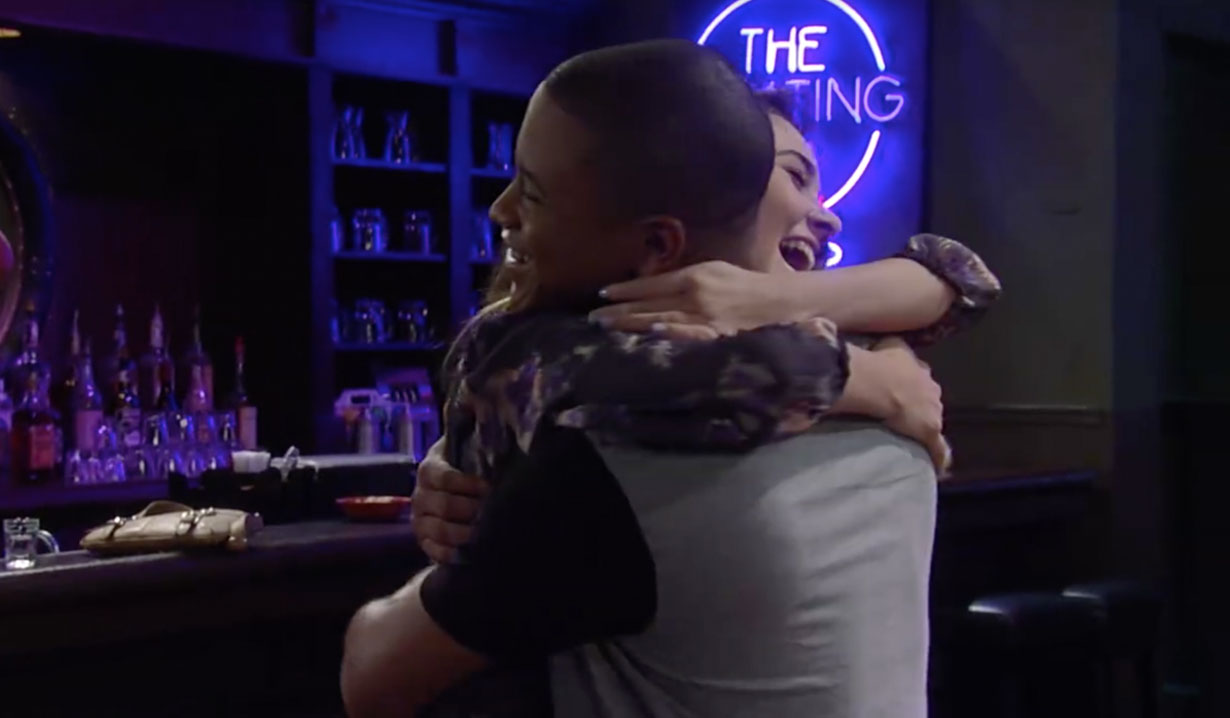 Andre returns to Jordan’s office and professes his love to her. He wanted her to know how he feels and hopes she can forgive him. The two kiss and Jordan thanks him for telling her. She promises once her work load lessons that he will see a lot more of her.

At GH, Monica confronts Finn in a private room about the syringe found in his locker. He refuses to talk, so she suspends him pending the test results on it. She also bars him from practicing medicine at GH. Tracy walks in and exclaims, “Over my dead body!” Tracy defends Finn to Monica, but Finn says it is okay as he will enjoy his time off. He walks out. Tracy and Monica argue about Finn, but Tracy still believes in his innocence.

Throwback Thursday! Tracy returns to the Quartermaine mansion and begs for Edward’s love

Rachel crashes a moment between Curtis and Valerie at The Floating Rib to ask for his help. She needs to know how to have someone declared legally dead, but Curtis says he is busy tonight and she will have to wait until tomorrow. Meanwhile, TJ surprises Molly with the news that he’s landed a paid internship at GH. She is thrilled for him. TJ spots Curtis and introduces Molly to him. Valerie steals Curtis away and asks if he’d be upset if she stayed and partied with her friends. Curtis had planned a private celebration at his place, but tells her to stay and have fun as he remembers his own graduation party. Meanwhile, Finn shows up with Roxy, and Rachel joins him at his table. She is taken with Roxy and reveals she had a bearded dragon as a child.

Ava finds Nikolas at The Melting Arms hotel in London. She claims she always stays here because it’s perfect for people who have something to hide. Ava knows the only thing that would keep her from her children is the fear of going to prison, so she thinks that must be what he’s running from. Before he can answer, Huxley appears and acts shocked to have run into them. He once again invites Nikolas to his private manor for a luxurious dinner. Nikolas turns him down for the second time, and Huxley apologizes for bothering them. Huxley leaves, and Ava warns Nikolas that running into him again can’t be a coincidence. Later, Ava learns Nikolas is hopping on another plane tomorrow, so she offers to drop him off via her car service. He reluctantly accepts. Huxley overhears them planning to meet in the morning, and says he will be waiting for them.

After making love at the cabin, Jason and Sam get back to work. Spinelli provides Sam with a way to crack the computer at the pawn shop and get the information on Nikolas.

Sam breaks into the pawn shop alone, hacks the computer, and finds the name Nikolas is using. Unfortunately, the owner walks in and holds a gun on her. He offers to let her go, if she is “nice” to him. She pretends to give him what he wants, but once close enough takes him down. Jason runs in and grabs the man’s gun, and he drops Sonny’s name to keep the man from mentioning this to anyone. Sam finishes getting information off of the pawn shop computer, and she and Jason leave.

Jordan steps out of her office only to return and find Curtis waiting. She wonders what he wants, and he was hoping for a second chance at being a cop. Jordan is hesitant, knowing that when he was using he screwed up big time. She asks what his sponsors think of this. Curtis says drugs were a way to escape from his mistakes, and they both know he was the one that told Tommy the truth about her and Shawn. Curtis feels it’s on him that his brother left on another tour of duty and was killed, and that is why he was using.

At The Floating Rib, Molly asks TJ why Curtis dropped out of his life. He doesn’t know, other than it had something to do with his mom. The two talk about their situations and decide to move in together. He leaves to go tell his mom the news. At the other table, Finn downs some drinks, and Rachel notices that he is not looking so good. Finn’s health rapidly declines, and when she wants to call an ambulance, he begs her to just help him back to the hotel.

Back at her office, Jordan is stunned as she has never heard Curtis talk about what he did with regret. He always acted like it was his moral duty to tell Tommy the truth. Curtis swears he knows now to stay out of other people’s business, and that he promises to never tell TJ that Shawn is his real father. TJ happens to approach his mother’s office just as Curtis says this and he overhears the truth. A stunned TJ walks off.

Sam and Jason return to the cabin with their new passports and Nikolas’ alias. They grab their bags to head to London.

Maxie asks Nathan if he still wants to marry her.

Sam and Jason arrive at the hotel in London.

Ava says she’s going to call the police and report their kidnapping.

Anna tells Paul that Sonny will be there to stop Julian.

Sonny says Julian is finally going to get what he deserves.

GH Recap: Evidence against Finn is...

GH Recap: Alexis is arrested for...