GH Recap: Evidence against Finn is found, and Andre confesses his feelings to Anna 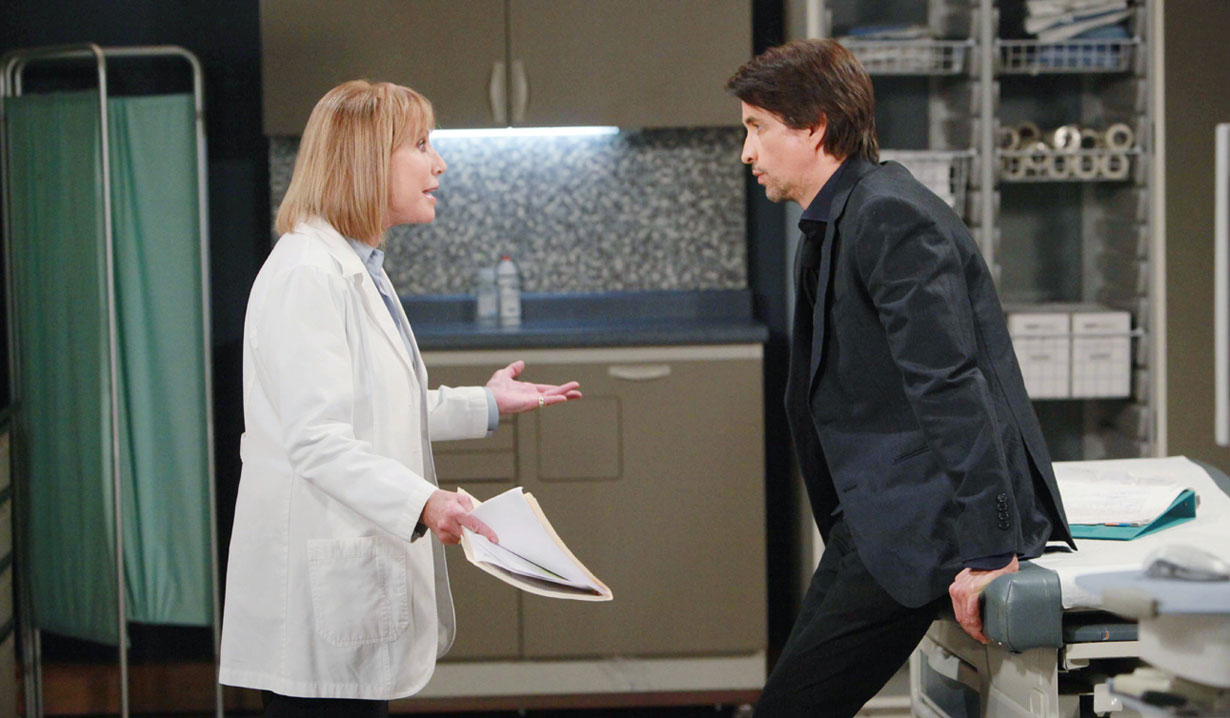 Dante is at the Floating Rib with Lulu. There Curtis surprises Valerie and the other cadets with a graduation party. Valerie thanks Curtis, and is shocked that he invited Dante and Lulu. Valerie goes over to see Lulu and Dante, and they both congratulate her. She is happy to have family here to celebrate with. Dante gets a call from their realtor, and they excuse themselves to take the call.

At Sonny’s place, Sonny has been looking into the administrator who oversaw Joss’ transplant, and tells Carly that she disappeared a week after the operation. He says he is sure he can find her, but he warns her that she may not like what she finds out. Carly ponders what to do. Liz, Felix and Franco are all waiting to be questioned by the hospital, along with other employees, about the missing drugs and the attack on Lucas. Meanwhile, in the locker room, Monica informs Dr. Finn that he has to submit his drug test sample, but he refuses and storms off. Liz and Felix continue to worry in the hall, and a nurse who was just questioned informs them that they asked her a lot of questions about Dr. Finn. Liz is called in to be interrogated, and Felix goes over to see Finn. He tells him that if he’s asked about the missing drugs then he’ll have to tell them he allowed Finn access to the cabinet one day. Finn doesn’t expect him to keep it a secret. Elsewhere, Franco talks to Obrecht, who asks him for a new piece of art. He says he’ll be happy to show her what he’s been working on. Obrecht thanks him, and excuses herself to take care of something. Franco runs into Liz, and as they chat, Carly arrives to speak to Liz about Jake. When she gets riled up because of Franco’s presence, Liz tells Franco he should probably go. He leaves. Carly tells Liz that she is going to search for the truth about Joss’ kidney, and asks if Liz wants in on her findings. Liz wants in, citing that it may help her understand what happened to Jake. Carly warns her to be careful with Franco and then she heads off. Franco returns, and Liz knows he was eavesdropping. He admits he did, and he thinks nothing good can come of finding the organ donner. He says sometimes it’s hard to go back to how things were when you know the truth. Meanwhile, Obrecht begins snooping around the locker-room. She later finds Monica, who is once again arguing with Finn about the test, and demands to see her. Monica goes with Obrecht, and then returns to confronts Finn with his syringe and drugs that Obrecht took from his locker. She demands an explanation.

Andre drops by Anna’s place to explain why he didn’t have her back with Jordan. He tells her about his fight with Jordan, and that he realizes he has feelings for Anna. This was unexpected, and his feelings aren’t going away. He also admits he cares about Jordan and could see a future with her. However, he realizes he needs to choose, and he is choosing to distance himself from Anna. Andre leaves, and Anna gets on her computer and sees messages coming in from the profile Emma set up for her.

Back at the Floating Rib, Jordan and Sonny arrive to the party. Sonny finds out from Dante and Lulu that they didn’t get the house they were hoping for. Sonny tells them things will work out for them, heads out and makes a call to someone for a favor. Meanwhile, Jordan makes a toast to the cadets and congratulates Valerie for graduating in the top ten of her class. Later, Curtis gives Valerie a fifty cent piece that stopped a bullet from killing him when he was shot at as a rookie. He wants her to have his lucky charm now.

Carly returns home and leaves a message with Jax about the search into the transplant. She tells Sonny that Liz is on board with the it, and she’ll tell Jason when he returns. Sonny says he’ll have his men find the administrator. Carly heads to bed, but Sonny says he is waiting for an important call.

Back at the Floating Rib, Dante gets a call back from the realtor, who says they got the house after all.

Over at Sonny’s place, Sonny gets a call from Diane, who tells him that Lulu and Dante go the house. He doesn’t want anyone to know what he did for them.

Andre goes back to Jordan’s office and tells her that he loves her.

Jason asks Sam if she is sure she wants to do this by herself.

Jordan asks Andre how he got from point A to point B,

Finn screams at Monica that he hasn’t done anything wrong.