GH Recap: Brad and Lucas marry, and Nikolas turns up

Summary for Monday June 13, 2016: Lucas and Brad marry, Ava heads out of town, Spinelli finds a lead on Nikolas, and Maxie confides in Griffin. 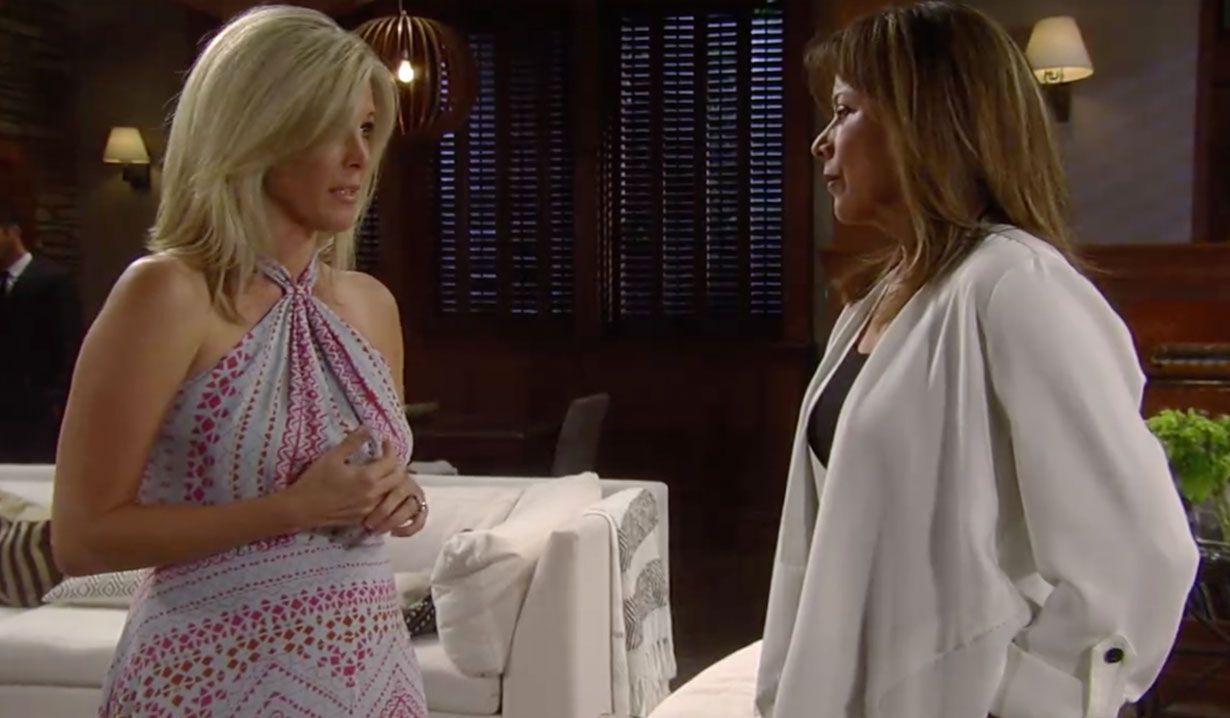 Nathan returns to Maxie’s place as Spinelli is making a call to search for information on Claudette. Nathan wonders how much Spinelli knows, and he tells him only that he used to be married. Spinelli tells Nathan that Maxie deserves better, and Nathan agrees. Spinelli warns him to shape up, and then he leaves.

Maxie confesses all to Griffin at GH seeing that he is a priest. Griffin tells her that what Nathan did was a crime of passion, and that Nathan wasn’t thinking clearly. He tells her not to let this one act redefine her relationship with Nathan. Maxie wonders why the man Nathan shot didn’t come forward, and Griffin suggests maybe he too had something to hide, that he had fallen from grace and felt bad about what he did. She realizes that Griffin is right, and Nathan isn’t the man he was that day, and she shouldn’t let it come between them. She tells Griffin whatever is making him sad, don’t let it define him either.

Sam and Jason return to Sonny’s cabin after the service at Wyndemere. Jason tells her about Spencer’s odd talk with Emma, and that he feels Spencer knows his dad is alive. Sam can’t believe Nikolas would do this to Spencer and everyone else who loves him. Jason believes he’s fallen so far down the rabbit hole and he needs help getting out. Jason lifted some papers he found, one of which has to do with a well-known document forger. He also got Nikolas’ laptop, and soon Spinelli arrives to crack it. Jason tells Spinelli that his memories are beginning to come back, which thrills him. Spinelli gets to work and learns that Nikolas had been researching several far away destinations. Spinelli leaves, and Jason tells Sam that they will find him. She worries the cops may find them first. Suddenly there is a knock at the door.

The feds arrive at Wyndemere with the detailed list of the diamonds they found during an earlier search. Rachel claimed was Nikolas’, but they tell her that her prints were all over it. Naomi says she can explain why and claims that she had to provide insurance companies with an entire list of their family’s finances, and Rachel helped her with entering them into a computer. The feds ask why the list is here if they don’t have the diamonds, and Naomi suggests one of the agents had it on them all along. One of the feds doesn’t like her accusations. Naomi says Rachel is as much a victim of her father’s crimes as his clients were. The feds leave, and Rachel wonders why her mother helped her. Naomi says she just wants her to remember what she did for her when she finally finds the diamonds. Naomi has to head back to Connecticut for her prison wives’ therapy group. She tells Rachel she is sorry for her loss, and to give herself time to grieve.

Brad, Lucas, Carly and Bobbie arrive at Alexis and Julian’s place, and Lucas and Brad thank Alexis for allowing their wedding to happen here. Julian gets a call and excuses himself, and Carly confronts Alexis and accuses her of knowing what Julian did. She warns Alexis that Sonny plans to make Julian pay, and the longer she protects him, the worse it will be for her. Meanwhile, Ava meets with Julian outside to warn him that the cops are looking at him for Carlos’ murder. Julian thinks he has most of his bases covered, and he refuses to tell her much so that she can’t be implicated as well. He suggests she take a little trip for now, one oversees would be best. She agrees and leaves. Julian returns with boutonnieres for the grooms, and the wedding begins. Lucas and Brad begin to recite their vows, but the wedding is halted when Nathan shows up with cops to search the place for evidence in Carlos’ murder. Julian reminds them he has an alibi, but Nathan says there has been a discrepancy found in it and he did have time to stab Carlos. They begin searching the house, and Lucas asks his father if they will find anything. Julian assures them there is nothing, and to continue with the wedding. The wedding concludes, the couple kiss, and everyone toasts to their happiness. Nathan returns to search the living room area after finding nothing upstairs. Bobbie and Carly head out, and Brad and Lucas follow. One of the cops finds the dagger and show it to Nathan, who confronts Julian with it.

Aww #Brucas wedding was even better than expected. Who needs bells and whistles when there's love? #GeneralHospital pic.twitter.com/zsriR64IiU

Ava gets on a plane and calls Sonny to let him know she is leaving town for business for a while. The attendant comes around to make sure everyone is buckled in, and wakes the man sleeping next to Ava. Ava’s stunned to look over and see it’s Nikolas.

Nathan believes they found the weapon that killed Carlos.

Jordan tells Anna she is not getting anywhere near that case.

A man on the plane thinks Nikolas looks familiar.

Andre tells someone he can’t side with them on this.

Ava takes a selfie of her and Nikolas.

Someone drops in on Sam and Jason.