Summary for Tuesday May 31, 2016: Julian learns about Lucas' condition, Molly questions her mom about Julian, Tracy and Sabrina argue over Edward, and Jordan arrives at the crime scene at Wyndemere. 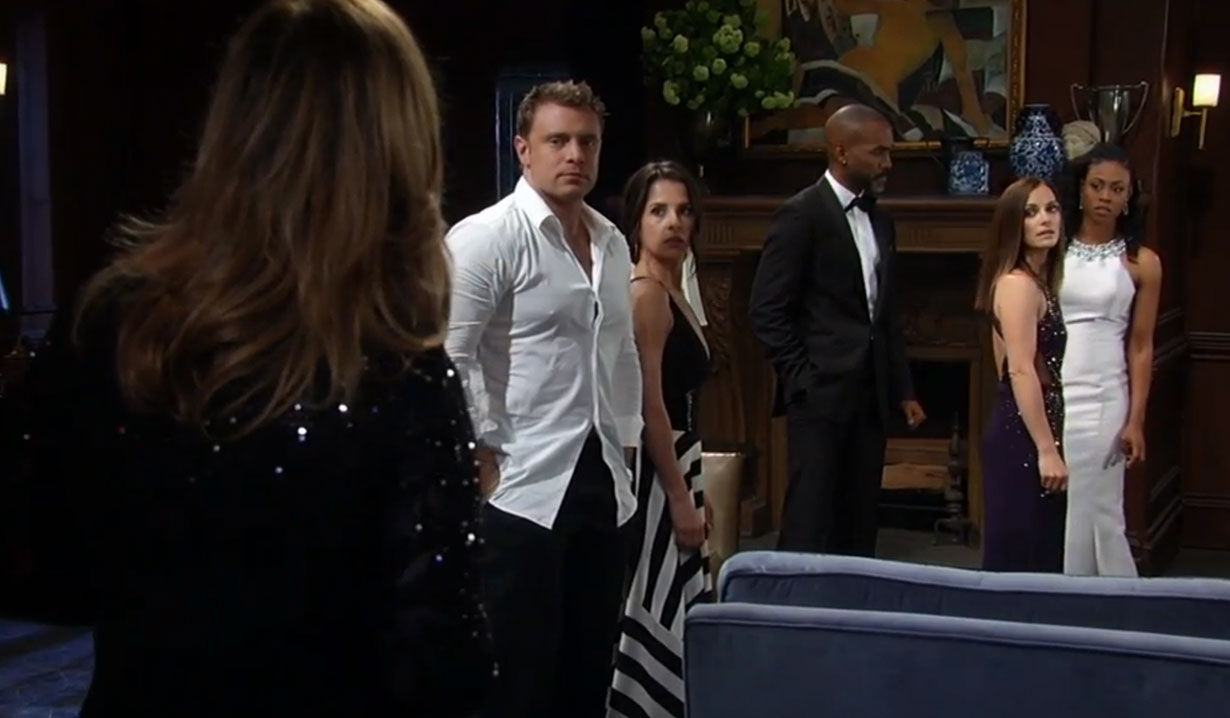 Jordan arrives at Wyndemere and examines the crime scene. Jason notes something is not right with the furniture in Nikolas’ room, but before he can say anything else, Jordan tells everyone to head downstairs. In the living room, Jordan begins questioning everyone about when they arrived and what they saw. Rachel feels this is pointless and accuses Jason of killing Jason killed her husband. Jordan says they have no evidence, yet. Laura walks in and asks what is going on. She is filled in by Jordan, who assures her that she has men looking everywhere for Nikolas, though they have no idea if it was really Nikolas that Sam and Jason saw on the rocks. A cop arrives with evidence found on the beach, and Rachel recognizes it as Nikolas’ phone. Jordan wonders if anyone else was here tonight. Rachel says nobody was here, but that Nikolas had surveillance cameras set up after the last time they had uninvited guests, so they can examine them. Rachel looks through Nikolas’ phone and cries, while Jordan warns Jason that he is the prime suspect if a murder occurred here. She tells him not to leave town.

At GH, Finn checks on Lucas, whose condition has not changed. Brad is still with Lucas and realizes nobody has called Julian, so he leaves to make the call. Obrecht walks in and tells Finn to get away from the patient.

Alexis gives Julian the cold shoulder at their house. They begin to argue when Molly walks in on them. Julian gets a call from Brad and leaves, and Molly fills her mom in on what little she knows about Brad and Lucas’ wedding not happening. Molly can tell something is bothering her mother and suspects it is something Julian did. Alexis asks her daughter what she’d do if she made a big mistake. Molly urges her mom to lean on those she trusts for support and to start listening to her instincts again. Later, Alexis makes a call to Diane to confirm they will meet at the PD in the morning to turn Julian in.

At the Quartermaine mansion, Tracy refuses to let Sabrina hold her son, and takes her to task for disappearing on her and not saying goodbye. They argue back and forth about what both Sabrina and Tracy have gone through over the past few weeks. Sabrina begs Tracy not to keep her from her son, but Tracy says she’s doing what she has to do. Michael says no, that Tracy is doing to Sabrina what was almost done to her. He reminds her that she fled to Europe with Dillon when she feared Paul was going to take him from her. Tracy tells Sabrina that she can’t give Edward back to her. Sabrina is shocked since she also chose the name Eduardo, after Edward Quartermaine, but she calls him Teddy for short. Tracy likes Edward better and eventually lets Sabrina spend time with her son.

Ava arrives at Sonny’s to get Avery, but Sonny refuses to let her take their daughter. Ava suggests they find a way to share custody, but he refuses. After much arguing, Sonny offers to let her spend some scheduled and supervised time with Avery, and when Avery is old enough she will decide whether she continues to see her mother. He also says some day the truth about what she did to Connie will come out, and he won’t help her even for Avery’s sake. Sonny lets Ava hold Avery.

In the hallways of GH, Brad calls Sam and leaves her a voice message asking him to call him as soon as possible. Julian arrives and heads into Lucas’ room with Brad, where Obrecht is accusing Finn of doing whatever was done to Lucas. Finn denies this. Julian wants to know what happened to his son, and Obrecht chimes in that the hospital has lost some patients under suspicious circumstances, and rats out Finn as their doctor. Julian asks Finn if he did this to his son, and almost attacks him, but Brad stops him and tells him that Griffin and Finn worked to save Lucas’ life. Brad tells Obrecht and Finn to take their squabble elsewhere, so they leave. Out in the hall, Finn and Obrecht continue to argue. Obrecht tells him that he better hope Lucas does not become his third patient to die. Back in Lucas’ room, Brad leaves Julian and Lucas to check on the lab results. Julian finally calls Alexis and tells her that he needs her. Back in the hall, Brad shows Finn and Obrecht the lab results that shows Lucas was given a muscle relaxant used in surgery, enough to kill him. Meanwhile, Alexis arrives to support Julian, and he hugs her.

Dante and Lulu shop for a new place to live.

Jordan questions Jason and accuses him of pushing Nikolas.

Liz confronts Rachel and says she had the most motive to kill Nikolas.

Spencer returns and asks if someone has died.

Carly is stunned when Ava shows up at her door.

What’s Behind the Big Shuffle Among TV News Executives?

The Circle Season 2 Premiere Recap: Plenty of Catfish in the Sea (Grade It!)