GH Recap: Obrecht refuses to believe Finn is innocent in his patients’ deaths

Summary for Thursday May 19, 2016: The baby is confirmed to be Sabrina's, Ava pays Morgan a visit, Tracy plots, and Obrecht is out for Finn's head. 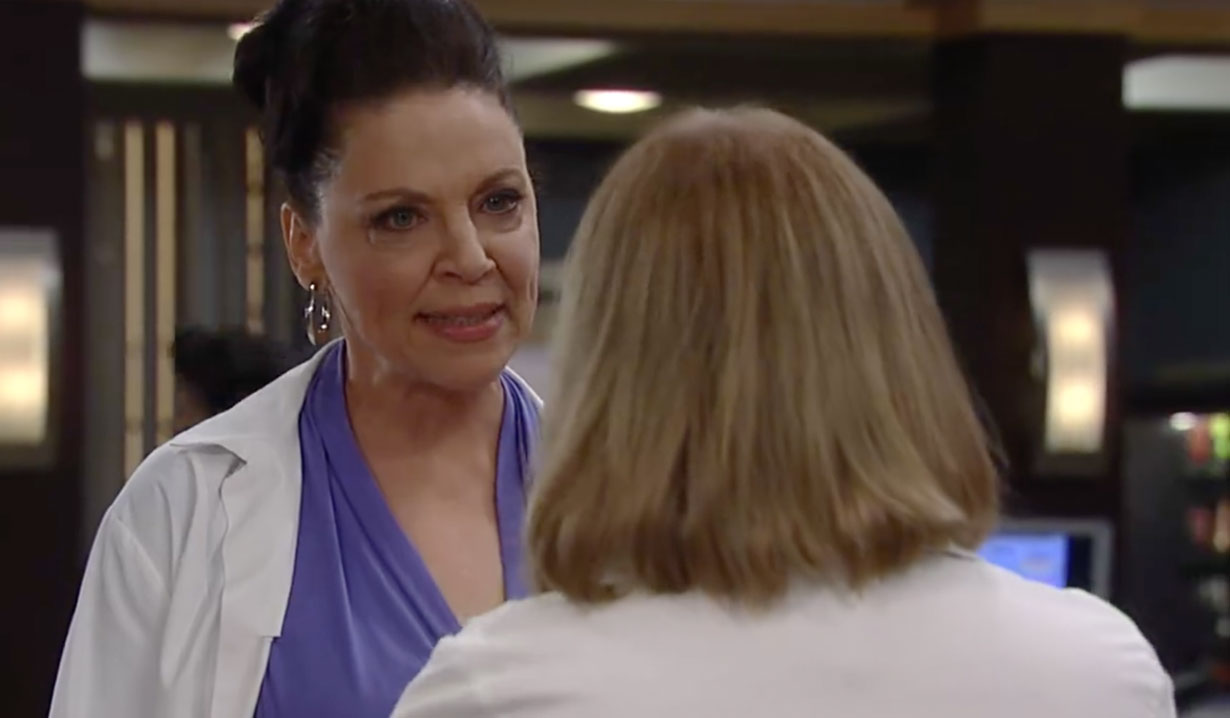 Ava runs into Kiki, who is back at work at the Metro Court. She wants Kiki to go on a short vacation with her and Avery, and Kiki eventually agrees. Up in his room, Finn apologizes to Roxy for neglecting her, and says he has to be very careful from here on out in everything he does.

Carly visits Morgan at the clinic and tells him the good news about Jason. She feels it’s a sign that any situation can turn around, even his. Carly lends him her phone so he can call Kiki, as he hasn’t heard from her in awhile. Kiki informs Morgan that she was coming to visit him later today and they have a lot to catch up on. Carly decides to leave so Morgan can have time alone with Kiki.

At GH, Obrecht tells Monica wants an investigation into Finn as another one of his patients is dead, but Monica said both were elderly and died of natural causes. Obrecht informs her that this hospital has a policy that two deaths under a doctor within thirty days requires an investigation, and she points out that they know little about Finn.

Dillon and Ned arrive at the Quartermaine mansion to scold Tracy for trying to keep a baby she found on the doorstep. Tracy is sure the baby is Sabrina’s and she left him for her to take care of. Dillon thinks it is more likely that Sabrina left the baby for Michael. Tracy says they live in the same house so it doesn’t matter who she left the baby for. Dillon and Ned both leave, and Tracy makes a mysterious call to someone.

Throwback Thursday: Lesley gets drunk at the Campus Disco

At the PCPD, Dante arrives with the DNA tests that indicate the baby is Sabrina’s. Michael feels Sabrina’s aunt is their best bet to find Sabrina, so Dante looks into it. Michael checks in on the baby, who is with a social worker that has arranged a foster family for him. Michael holds the baby while the social worker takes a call, and he promises the boy he will find his mom. Later, Dante fills Michael in that they’ve found out that Sabrina’s aunt flew here and went right back to San Juan, so she may have dropped the baby off. Dante however says nobody has seen her since she returned to San Juan, and the local authorities have an APB out on her. Michael calls his dad and asks for a favor.

Finn returns to work at GH, where Monica tells Finn that he must appear in front of a review board because of his patients’ deaths. They go into a board room where Obrecht and Finn trade shots at one another. Monica says in both cases the causes of death are consistent with his notes, but Obrecht wants an autopsy on the second body. Monica feels Finn has done nothing wrong and no further autopsy is needed. The board sides with her. After the meeting, Obrecht warns Finn that she knows he is hiding something and she will get to the bottom of what is going on. Later, Obrecht makes a call to Finn’s old hospital for records on all the deaths that happened under his care.

Back at the Metro Court, Kiki gets off the phone with Morgan realizes she can’t go away with Ava as she needs to be here for him. Ava tries but fails to change her mind. Later, Dillon runs into Kiki while grabbing some coffee. He’s glad to see her back at work, and has a question to ask her. He is going on assignment to photograph a band and wonders if she wants to go with him. The band turns out to be a favorite of Kiki’s, and she considers his invite, but has to make sure she can get away and will let him know.

At the Quartermaine mansion, Tracy is reunited with Sabrina’s baby, as she pulled strings to be his foster family. After the worker leaves, Tracy talks to baby Edward about what his name means. Ned later is stunned to walk in on his mother with the baby.

Ava arrives to see Morgan at the clinic, which shocks him. She tells him she will always care about him and wants the best for him. However, she wants Morgan to break things off with Kiki as he always hurts her. He refuses and swears to never hurt Kiki again. Ava tells him they both know that isn’t true, and if he truly loves Kiki then he’ll put her first.

Finn returns to the Metro Court and looks through the patient files of his dead patients.

Kiki asks Morgan if something happened.

Brad suggests to Lucas that they get married at the Nurses’ Ball.

Sonny tells Michael he thinks he knows who has Sabrina.

Someone opens a door to a room where Sabrina is.