GH Recap: Laura and Kevin discover a lead at the old Campus Disco

Summary for Wednesday May 18, 2016: Jason asks Sonny for a favor, Nikolas learns he's in trouble with the IRS, Rachel asks Tracy for a job, and Laura and Kevin find another clue. 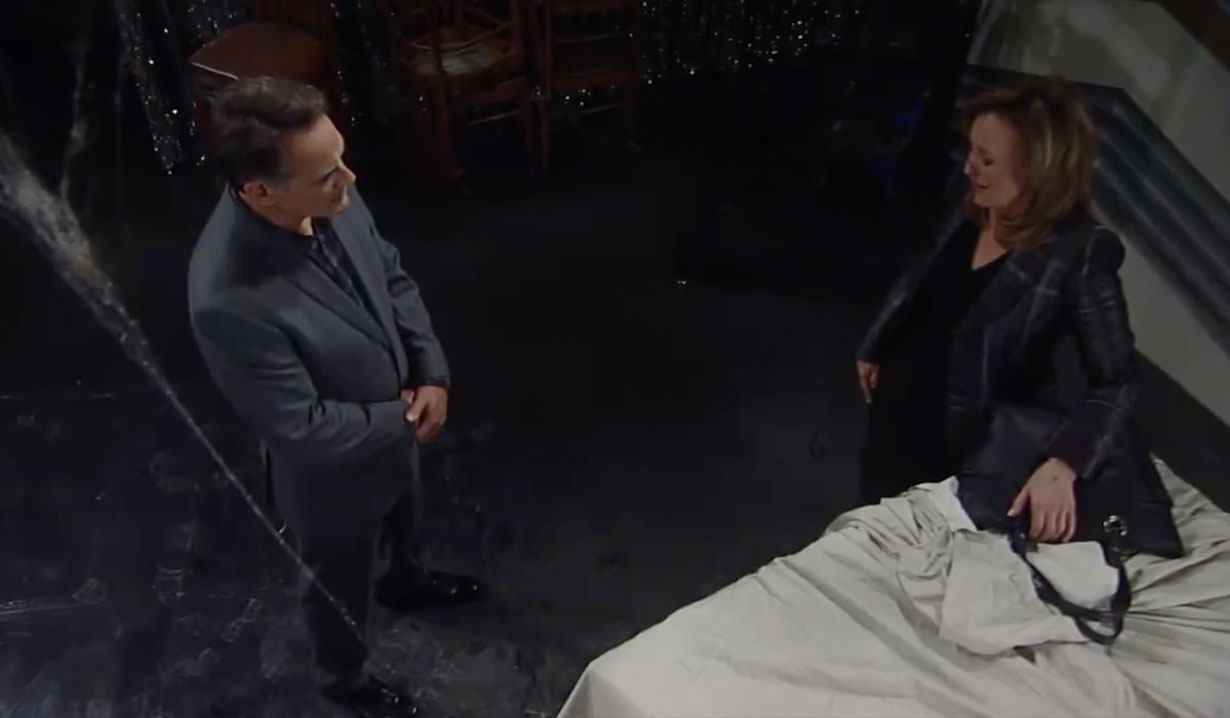 Laura and Kevin pose as interested buyers and are shown into the old Campus Disco by a realtor. Laura recounts the night Luke raped her. She knows Luke has never forgiven himself for it. However, she doesn’t regret what came after, their marriage and the children they have together. She refuses to let Helena beat her at this game, and they begin looking around the place for any clues she may have left. Laura finds an envelope stapled to the underside of an old desk, which contains a blank piece of paper. Laura thinks Helena just lured her here to relive the worst moment of her life. The realtor returns and asks if they are interested, but they pass. The woman says it’s just as well as the owners resist any offer they are made. Laura asks about the owners and the realtor says it’s Llyod and Lucy Johnson. Laura asks for contact info, but the realtor can’t give her that. When the woman leaves to take a call, Laura tells Kevin that Lloyd and Lucy where her and Luke’s aliases, which they often used in Beecher’s Corner. Kevin thinks they should go there. Laura warns him this could be dangerous and crazy, but he’s onboard.

At GH, Felix asks Finn to participate in the Nurses’ Ball, but Finn tells him he really doesn’t belong on a stage. However, Finn does need a favor, and asks for some muscle relaxers for himself not a patient. Felix gets paged and tells him to take what he needs from the supply station, but be sure to sign them out as they’ve had some discrepancies.

Nikolas catches Rachel walking around his living room taking photos of all his paintings and antiques. He asks what is going on, and she reveals she’s selling his things online. He refuses to let her sell his things, but she reminds him this is a community property state. They argue, and he tells her that if she was really the woman he fell in love with then she’d go get a job, but she feels nobody will hire her. He tells them to prove them and him wrong by making herself indispensable. Rachel leaves and later Diane turns up with news that IRS has some issues with taxes owed from the ELQ sale. Nikolas learns Jason filed legal papers on the sale, for once in his life, and thinks he did this on purpose to railroad him. Diane says he must have some money tucked away to pay the feds, and if not he could sell some of these priceless antiques on eBay.

At the Quartermaine mansion, Michael recognizes the rattle with the baby from San Juan and is sure this is Sabrina’s child. He wants a DNA test done to prove the baby is hers, as then the police may start looking for her. Tracy calls Finn for help, just as he is looking through the meds at GH. She asks him if he could come over as she has a patient that needs attending to. He agrees and later arrives to check the child out. On the surface he looks healthy, but says he could have number of diseases they should run tests for. Michael also wants DNA tests done, and Finn agrees as this is a child and the authorities need to be notified. Rachel shows up to see Tracy, and Finn heads back to the hospital. Tracy wonders what she wants, and Rachel asks for a job. She wants to prove to everyone that she is not her father’s daughter. Tracy says fortunately they don’t need anyone at ELQ, but she may need a nanny. Rachel thanks them for their time and leaves. Michael tells Tracy that they can’t keep this baby and they have to notify the police. Tracy says little Edward is staying put as Sabrina clearly left him for her as they were friends. She tells Michael to watch him while she goes upstairs and gets a nursery ready. When she returns, she finds Michael has left with the baby.

At Sonny’s place, Jason tells his friend that he’s started to remember. He knows what Sonny did for him back in the day to help him, and how he’s always respected him. He admits he hasn’t treated Sonny as a friend lately. However, he also knows working for Sonny lead him to walking out on Sam and Danny and leaving them, and he can’t do that again. Sonny understands and even gives him his blessing to start fresh. Jason still needs a favor, as a lot of people could still be after him. Sonny promises he will always be here for him, no questions asked. He welcomes Jason home with a hug.

Michael returns to GH with the baby and introduces him to Felix. Meanwhile Finn goes in to check on his latest patient only to find them flat-lining.