Summary for Tuesday May 17, 2016: Laura has an idea about Helena's clue, Jason fills people in on his memory returning, Tracy discovers a baby, and Alexis chooses a side. 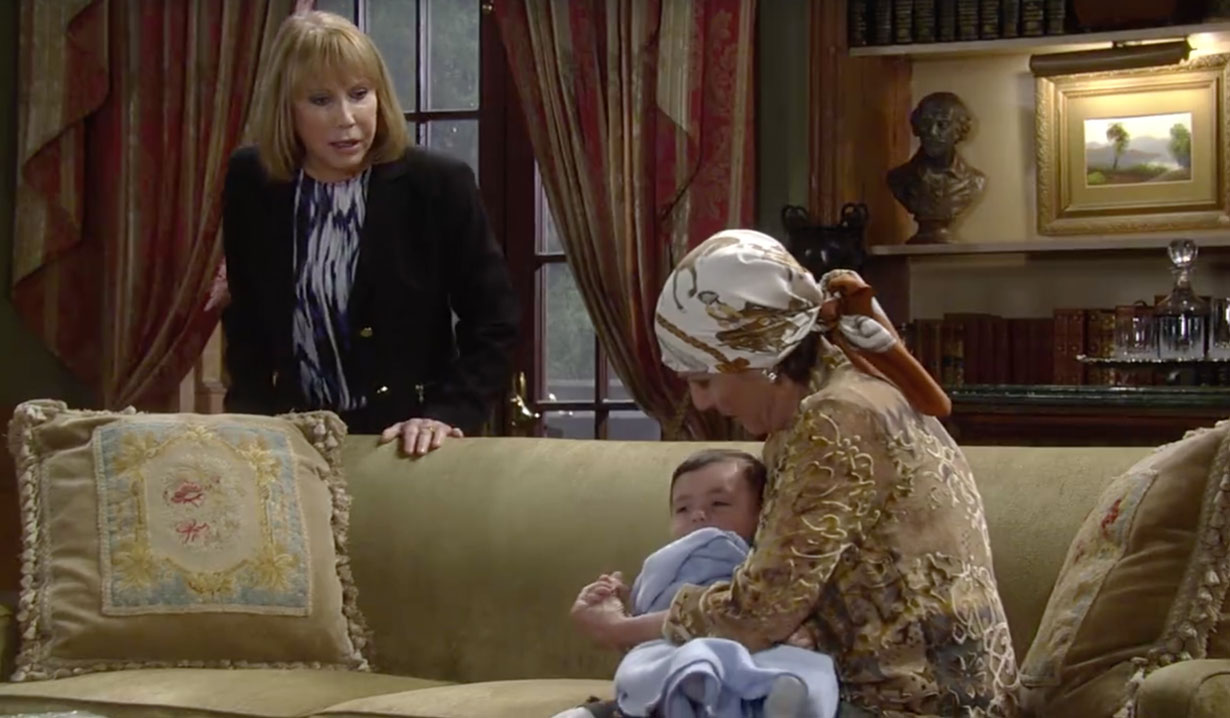 Sonny arrives at Alexis’ place just as Julian burns the bloody rag. He can tell by the look on Alexis’ face that she knows Julian killed Carlos. He wants her to turn Julian in, but Julian tells Sonny he won’t drive a wedge between him and his wife. Sonny wonders what they are burning in the fire as it’s a little late in the season for one. He starts smashing things with a fireplace poker when they don’t give him an answer, and ends up hitting Julian in the legs, which takes him down. Alexis begs Sonny to stop. Sonny hugs Alexis and tells her that she has sided with his enemy, so she has killed their friendship. He tells her that she’s nothing to him now. Julian won’t let Sonny threaten his wife, but Sonny says he already did. Sonny walks out. Julian promises Sonny won’t hurt her, but Alexis says she can’t take anymore bloodshed. He says there won’t be, he’s in the clear and he will protect her. Julian still needs to deal with the shirt he was wearing last night, which he produces from a bag. She says she’ll burn it while he goes upstairs and nurses his wounds. Alexis takes the shirt, but instead of burning it hides it in a cabinet.

At the hospital, Liz gets a call from Franco, who is at his place and has Jake. Meanwhile, Sam and Jason arrive to have him checked out, and he remembers the night his father died here and how he was busy fighting mobsters at the time and wasn’t with him. Monica shows up and Sam leaves them to talk. Jason tells her about the accident and how his memories have come back. He remembers how he’s missed so many things and wasn’t there for her and Alan, and he promises to do better. Elsewhere, Laura meets with Kevin. Laura remembers meeting Luke at The Campus Disco, and the song “Heartbreak Hotel” played a lot there, so she thinks that is what the clue means. She says the building is still there, but Kevin wonders if it could be a trap. He says he’ll go with her if she is insistent on exploring it. In another part of the hospital, Lucy hears Amy and Felix talking about the Nurses’ Ball. Lucy says this year’s ball will be the best yet. She has planning to do and heads off. She ends up running into Laura and Kevin, who are talking about leaving together, and wonders where they are going. Kevin is paged and has to take care of something, but asks Laura not to go without him. Kevin walks off, and Lucy thinks they are a couple. Laura tries to tell her that she’s misunderstood. When Kevin returns, she gives them tickets to the ball and even suggests they do a number together as they’d be great. She then walks away. Laura and Kevin head out to the old disco.

Liz shows up at Franco’s place and finds Jake is fine. Jake becomes upset with his mom for not letting him see Franco and he runs off to a back bedroom. Franco apologizes for not calling her sooner, but Jake was waiting here when he got him. Jake was upset and Franco didn’t want him to run off again. He knows Jake has something locked inside him because of Helena and her book, and he thinks he can help him. He says she is in over her head here and should be accepting any help she can. Jake comes out and Liz tells Jake they need to go. Jake asks when he will see Franco again. Franco tells him that is up to his mom.

At the Quartermaine mansion, someone rings the doorbell and Tracy finds a baby on the doorstep. Later Monica returns home and wonders where she got a baby. Tracy explains and says she’s calling him Edward. Monica shares the news that Jason has his memory back.

At the Corinthos compound, Jason arrives to visit Carly. He lets her know he has his memory back by talking about when he took her and Michael to Florida after her adoptive mother died. Carly gives him a hug and is glad he’s finally back. Meanwhile Sam is in another part of the house and runs into Michael and tells him the news. They go in to see Jason, and Michael and Jason hug. Michael and Sam head out to check on Monica, and Carly and Jason wait for Sonny to come home to give him the news. Sonny eventually arrives.

Back at the Quartermaine mansion, Michael arrives and sees the baby with Tracy. When he sees the rattle that came with the baby, and recognizes it from Puerto Rico, he realizes it’s Sabrina’s son.

Michael is sure the baby is Sabrina’s.

Felix is happy to run into Finn.

Diane tells Nikolas that he owes some back taxes.

At the old disco, Laura regrets coming here that night.

Tracy asks Rachel what she wants.

Jason asks Sonny to do something for him.

GH Recap: Julian admits all to...