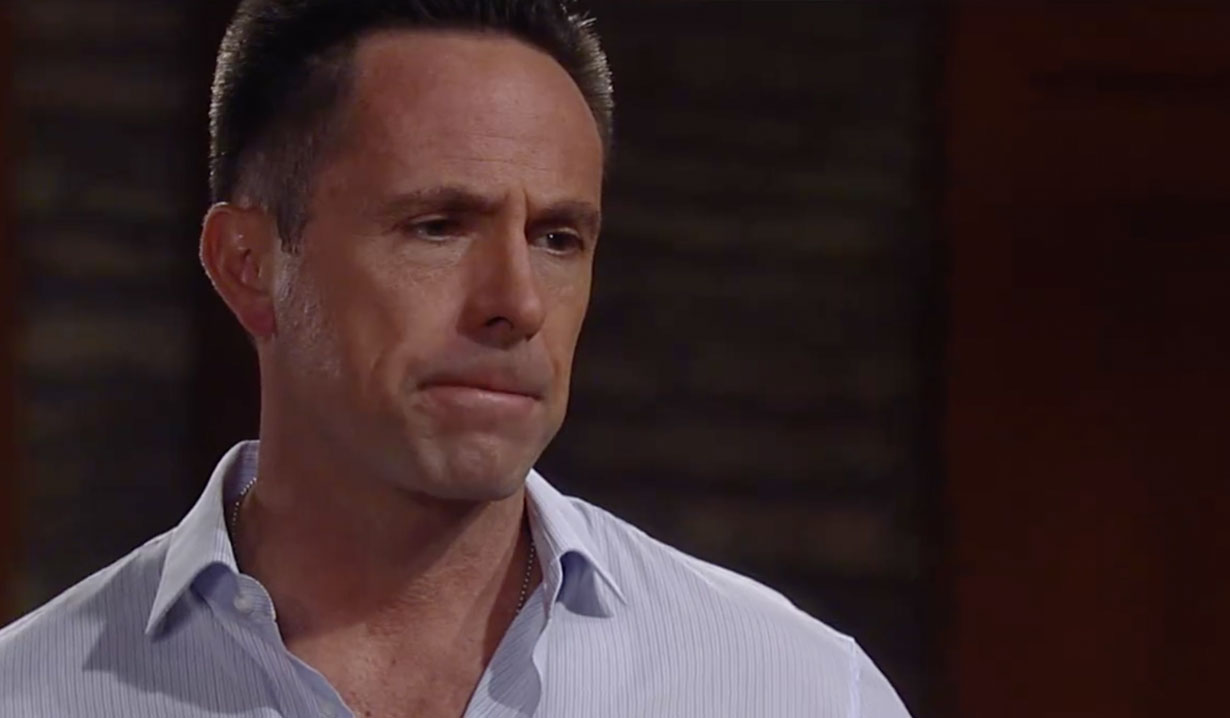 At Alexis’ place, Alexis suspects Julian used the dagger to kill Carlos, but he continues to claim he was at the office helping Nina. They argue for a bit, but she doesn’t believe his lies. She cries that it was unthinkable that he used the same knife that took her mother from her. Alexis starts looking through his things and pulls out a bloody handkerchief that she knows was used to clean the dagger. She also realizes the stain on his shirt earlier wasn’t wine, it was blood. Julian asks her to trust that everything he has done is because he loves her and didn’t want things to end. She grabs her phone to call the police, but he tells her that she’s chosen to stay with him, even after she knew he had Duke killed, so she has made herself compliant in everything he’s done. Alexis says she never wanted this, but he says she chose to defend Carlos in order to protect them. He tells her that deep down part of her had to know this could happen, and the important thing now is it’s over and the threats have been eliminated. He reminds her their vows were for better or worse, and that they can get through this. He takes the rag from her and goes to burn it. She tells him to stop, but he says it must be done and throws it into the fire.

Sonny meets Carly at the Metro Court bar and explains the events of last night and Carlos’ death. Carly again asks him to leave this to the police to handle things. Sonny knows Alexis will try and protect Julian, and Carly says she’d do the same for him. Sonny says the difference is that he would never drag her into his business.

At GH, Monica and Finn discuss his patient’s death, and Obrecht’s request for an inquiry into the case. Meanwhile, Liz and Jake arrive to see Jake’s doctor, and she has to explain he isn’t going to see Franco anymore. Jake wonders why. Franco walks up and tells him it’s because of his dad. Nurse Amy overhears and butts in and adds that it was Liz who actually canceled the appointments. Amy walks off, and Jake tells his mom that Franco is his friend and this isn’t fair. She says he’s late for his appointment, and he claims he can find his own way there and storms off. Liz scolds Franco and says he left out a few details of his fight with Jason, and that he is acting like his old self. Franco explains his feelings were hurt and he lashed out. He assures her he will be back to his ‘new’ old self soon, but he’s dug himself into a deep hole and is working to get out of it. Liz tells him what he did was wrong, but Franco says he’s not a danger to Jake and she needs to stand up to Jason. Back at the nurses’ station, Monica is still explaining about Obrecht wanting an inquiry into Ellis’ death to Finn when Amy arrives and begins gossiping about the nurses’ ball and Jason Morgan. Monica scolds Amy and sends her off. Finn thinks that Obrecht blames him for being ousted as Chief of Staff and has it out for him. Monica lets him know the committee won’t be investigating Ellis’ death so he’s in the clear. Meanwhile, Amy goes to find Liz and Franco and tells them that the doctor just informed her that Jake never showed up for his appointment. They go looking for Jake but can’t find him. The police arrive as Liz called them, and she fills them in on the situation. After she is done she realizes Franco is gone.

Spoilers! Wedding plans are being made

Jason and Sam talk at her place. He explains the accident to her, helping Dante, and how his memories came back to him. She says he has his life back now, but Jason says that depends on her. He points out that they are divorced, which she reminds him was so they could have a clean start. Sam tells him that she’s missed him so much and loves him. He loves her as well. She asks him to go to the hospital and get checked out, and he agrees to for her.

Finn arrives at the Metro Court and Carly asks him for help looking over the employee print out she lifted from the hospital. He looks it over and points out one employee ID number is the administrator for pediatrics, but he hasn’t worked at GH since this day, so they are where she needs to start.

Franco goes home and gives Jake a bowl of cereal.

Back at Alexis’ place, Sonny arrives and Alexis keeps her cool. Sonny can see from the look on her face she’s figured out that Julian killed Carlos.

Franco calls Liz and tells her that he has Jake.

Monica finds Tracy with a baby and asks where it came from.

Lucy tells Amy and Felix that this will be the best nurses’ ball yet.

Kevin wonders to Laura if this is a trap set by Helena.

Carly is reunited with Jason.

Sonny takes Alexis’ hand, and Julian tells him to let go or he’ll cut his hand off.