GH Recap: Franco embraces his dark side as Sam fills Jason in on his past with him

Summary for Tuesday April 26, 2016: Jason and Franco have an intense encounter, a young man provides Jordan with evidence, Alexis worries her life is falling apart, and Ava gives Julian some advice. 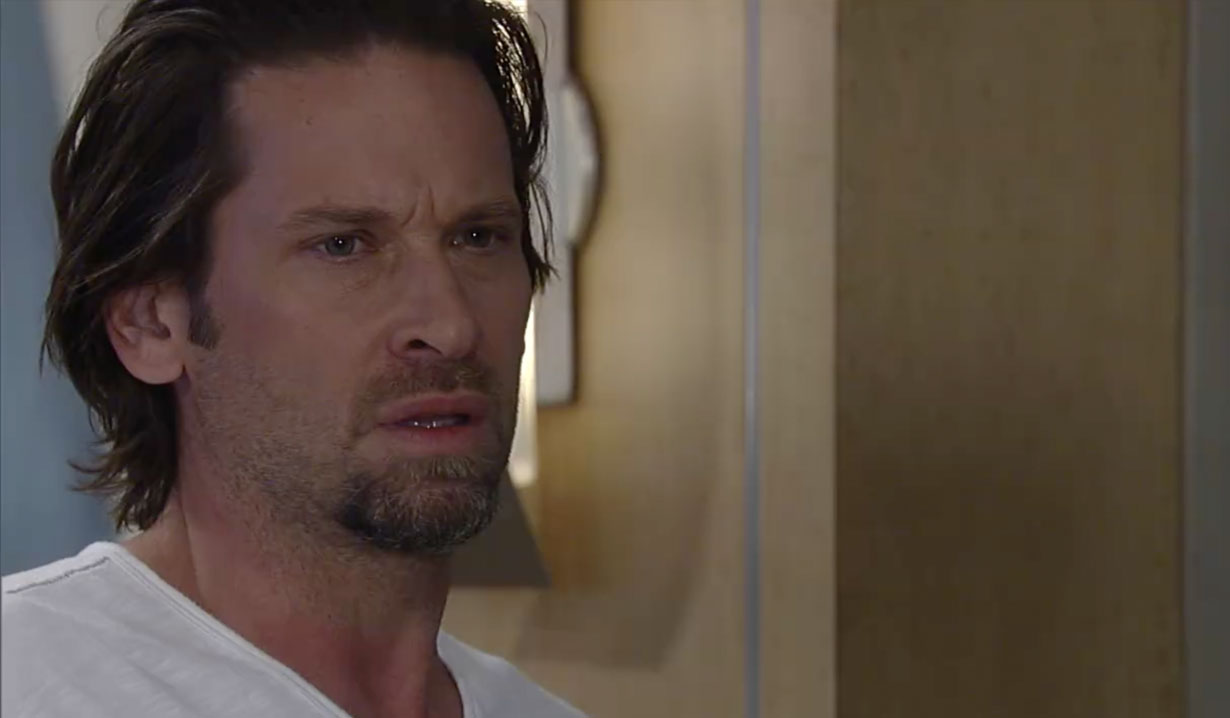 At the hospital, Franco pushes Jason’s buttons until Jason throws him up against the wall and begins strangling him. Obrecht yells at them, but it takes Sam’s arrival to get Jason to back off. Sam and Jason leave and Obrecht scolds Franco. Franco rants about how redemption is an illusion, and he tried to reform himself, but it got him nothing. He thinks he should be the Franco that he was born to be. Obrecht tells him that he matters to his patients and has done good work. He fells Nina doesn’t appreciate him, so she urges him to work things out with her. Obrecht decides to go to The Floating Rib and tells Franco he should meet her there.

Ava drops by Franco’s place to see Kiki. She is looking forward to Kiki coming home soon, but Kiki tells her this is her home now and that it is better she stays here for many reasons. Ava claims to understand and decides to go.

At the station, Jordan questions a young man named Hal who says he witnessed Duke’s murder. He explains he didn’t come forward earlier because he had been using and had to get his life together. He tells her that he was breaking into cars at the Metro Court when he heard two men arguing about Julian Jerome. He describes the fight between Duke and Carlos, and Jordan has him identify both men from photos.

At Sonny’s office, Ric arrives to speak with Sonny, so Carly leave them, but orders Sonny not to be long as they have more birthday celebrating to do. Ric tells Sonny that a witness to Duke’s murder has come forward, and he feels it’s funny how they just lucked out with this. Sonny changes the subject and has a job for Ric. Later, Ric leaves and Carly returns and cautions Sonny about trusting his brother. Sonny feels she may change his mind, as he asked Ric to find out where Joss’ kidney came from because he knows it’s been troubling her.

Julian comes home as Alexis has to head out after learning the judge is ready to rule on her motion to have the charges against Carlos dropped. Later, Ava drops by to talk to Julian about her troubles. Julian tells her nobody is coming after her as he is running the organization again. He also says that Alexis doesn’t know, and he’s not going to tell her.

Awards News! The Daytime Emmy Awards presenters have been announced

Dillon and Nina run into one another at The Floating Rib and talk about what transpired between them. He assures her that he doesn’t judge her, and she thanks him for getting her home. He says Kiki helped him once they arrived at her place, and Nina makes a comment about how Kiki never leaves the apartment. Dillon has to take off, but urges Nina to talk things out with Franco. Later, Obrecht arrives and joins Nina at the bar. She tells her niece to make up with Franco, but Nina says Franco won’t even answer her texts. Obrecht says she can fix that. Meanwhile, Sam and Jason arrive and get a table and drinks to talk about his fight with Franco. Jason feels like Franco is still dangerous, and Sam tells him about Franco’s past obsession with him.

Alexis arrives at the station where Jordan tells her the charges against Carlos won’t be dropped as an eyewitness has come forward. Alexis believes that a witness suddenly coming forward right now is no lucky break. Later Jordan thanks Hal and tells him he can go home, but he becomes worried when he finds out he has to come back and give his statement again, and that he may have to testify in court.

Back at Franco’s place, Dillon arrives and tells Kiki he happened to get a flat tire in her neighborhood, and asks if she can help him change it. She doesn’t believe his story and asks what he’s really doing here. He tells her that he wanted to check on her as he was worried about her. She assures him that she is okay, but he still needs help with his car as he deflated one of his tires to try and make his story authentic.

Franco arrives at The Floating Rib, having been lured there by a text from Obrecht, but walks out when he sees Nina with Obrecht. Nina sees him leave and wonders what is wrong with him. Meanwhile, Jason suggests he and Sam take off on his bike for a little adventure. She agrees and they leave, unaware someone is following them.

Alexis returns home and tells Julian a witness has showed up to ID Carlos, which is bad news. They agree it’s suspect that someone suddenly came forward. Alexis heads upstairs, and Ava advises Julian to use his resources and get rid of Carlos once and for all. After Ava leaves, Julian makes a call to have the witness taken care of.

Nina returns home and finds Dillon talking with Kiki. Kiki tells Nina that they are going out for a bit and not to wait up. Nina asks about Franco, but Kiki says he hasn’t been home.

Tracy tells Finn that she’s not done with him yet.

Curtis tells Hayden to take the money and run.

Dillon asks Kiki how she is really holding up.

Alexis questions Julian as to who he is trying to make sure doesn’t talk.

Kristina realizes Morgan doesn’t know what is going on with her.

Someone watches Jason and Sam kissing in a barn.

GH Recap: Franco and Jason have...