Summary for Monday March 28, 2016:  Elizabeth slaps Rachel, Ava has a proposition for someone, and Nikolas tells Sam to continue investigating Hayden. 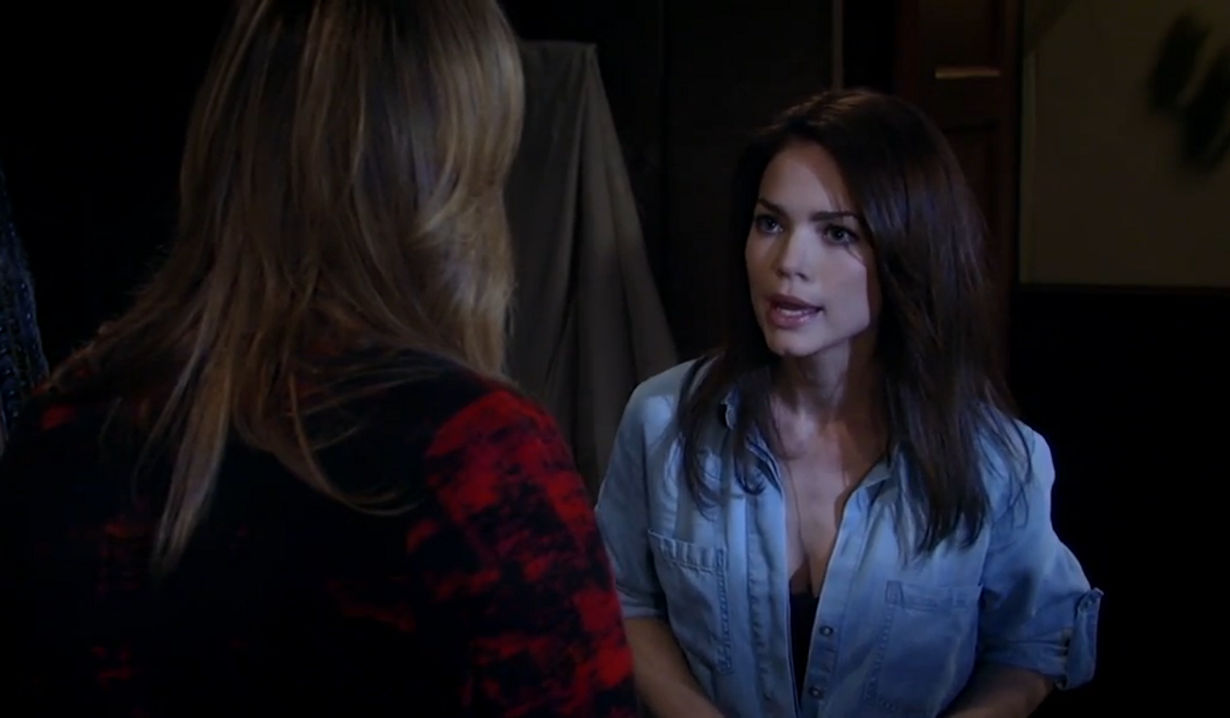 In the attic at Wyndemere, Laura is flipping through the textbook she found when Elizabeth comes up the stairs. Liz warns Laura to steer clear of the living room and fills her in on the Hayden/Rachel scenario. Liz thinks this should finally prove to Nikolas what kind of snake Hayden is but Laura’s not so sure. When Liz wants to call the police, Laura reminds her that no matter what Hayden has done to Nikolas, he’s done far worse to her. Elizabeth says they can still turn her in because Hayden doesn’t know Nik was behind her shooting. Laura says they have to leave the decision up to Nikolas.  Downstairs in the living room, Hayden is trying to smooth things over with Nikolas but he’s not buying it. Hayden accuses Nik of lying to her right now about something but doesn’t say what. Nikolas wants to know what she’s accusing him of. Hayden evades the question and starts blaming Elizabeth for all their trouble. Nikolas grabs his jacket and heads out for the Metro Court to figure things out. Elizabeth enters, looking for Nikolas. Hayden tells her he left. As Liz turns to leave Hayden grabs her by the arm and tells her, “You’re not going anywhere, you brittle bitch.” Liz tells Hayden it’s over. Hayden says she’s not leaving. The cat fight continues and Elizabeth slaps Hayden’s face.

Laura meets Scott at Kelly’s. She shows him the textbook and tells him about Helena’s cryptic message telling her to look for “something that she loved and something that she lost.” She shows him the circled letters in the book and Scott tells Laura if anyone can break the code it’s her.  Across the room, Sam, Jason and Danny are having lunch. Jason presses Sam for a date. She turns him down for now because she’s working on a case. Jason asks if it’s Nikolas’ case she’s working on. Sam winks and says she could answer his questions if he were her partner. Jason declines because he’s working for the Quartermaines. As they leave they decide to go visit Tracy.

In her hospital room, Tracy is asking for Dr. Finn. Monica, Dillon and Dr. Obrecht are there. Obrecht says no, Finn’s not fully vetted yet, but Dillon calls Finn anyway. Obrecht leaves the room as Finn comes rushing in. When Tracy mentions leaving soon, Finn apologizes for misleading her and tells her some people are cured with this treatment but some don’t make it. Finn tells Tracy to get some rest and he and Monica leave the room. Out in the hall, they’re met by Obrecht who wants to speak to Finn. When she tells him he’s not allowed to practice at the hospital, Finn threatens to go to the board about Mayes’ misdiagnosis of Tracy and the needless surgery he performed on her. Sam and Jason enter Tracy’s room but Sam gets a text to meet Nikolas at the Metro Court so she leaves. Dillon leaves to get coffee, and Tracy and Jason are alone. Tracy becomes confused and starts talking to Jason as if he were her father. Jason turns to go get help but she stops him. She tells “Daddy” she knows it’s her responsibility to get ELQ back and she’s going to do it even if she has to go to Jason and sacrifice her dignity. She tells him she has a secret weapon named “Rachel.”  Outside Kiki’s hospital room, Ava’s talking to Delia on the phone. She tells her not to come visit Kiki right now because it isn’t safe just as Paul Hornsby rounds the corner. Ava asks for the recording again and Paul turns her down. He wants to renew their “beneficial arrangement” and Ava reminds him it’s because of him that she now has a target on her back. Paul offers to arrange for security. Ava refuses and tells Paul she’ll survive without him. Paul leaves and Ava gets a call. She tells someone that she has a proposition for them.  At the nurse’s station, Dr. Obrecht tells Monica that Finn will be clear to treat Tracy by tomorrow.

Sam meets Nikolas at a room at the Metro Court. He tells her who Hayden really is and says he wants her to continue the investigation.

In his hotel room, Finn injects himself with some kind of drug.

Sonny is going to get justice for Duke.

Dillon is worried about Tracy.

Sam fills Jason in about Rachel.