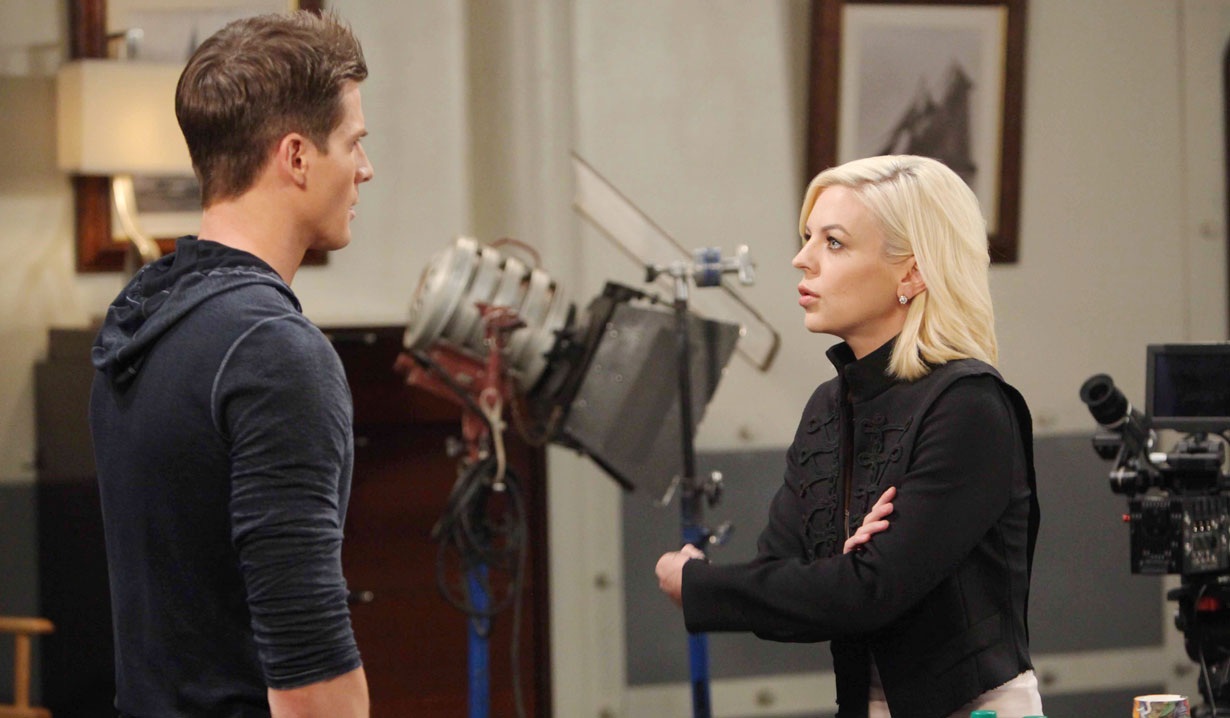 At the Crimson offices, Maxie is nervous about the new issue, but Dillon tries to keep her calm. Maxie tells him about how the printer wanted to know if she wanted the issue printed green again, which she told him no as it was a mistake. Maxie’s phone rings, and it’s the messenger bringing the new issue up. They receive the boxes and open them up, only to find each box contains multiple copies of a single page of the whole issue.

Epiphany talks with Liz at GH and asks what is going on between her and Franco. Liz tells her nothing is going on between them, and that he is just concerned about Jake. Meanwhile, Franco changes in the locker room and happens to find the book that Helena left to Liz about Jake. Nina shows up and snatches it from him, and yells at him for going Philly without telling her. He says it was only a day trip, but she sees it as more. As they argue about what he did, Liz and Epiphany walk in and hear Franco assuring Nina that Liz is only his friend and she need not worry about her. Epiphany quickly warns Liz not to get caught between those two whackadoos. Nina and Franco make up, Nina heads out, and Liz confronts Franco. She tells him that they aren’t friends, she will never trust him, and she doesn’t want him working with Jake. He confronts her with the journal he found, which she explains. Franco says the last page about Helena telling Jake never to forget and never to tell is troubling. He begs Liz to help him help Jake, and she agrees.

At Sonny’s place, Kristina shows up and Sonny talks with her about her independent study. He isn’t buying the whole thing and wants to know what is really going on with her. She swears nothing is going on, that she and her professor are just friends, which happens at college nowadays. She has to get going to the court house for mom, but he’s not going to let up on the secret she’s keeping from him. Later, Sonny talks with Max about what is going on with Kristina. He can’t get the school to tell him what is happening as she is an adult, so he asks Max to go to that school and dig around.

Alexis wakes up to find that Julian has made her a power breakfast for her big day in court. She’s thrilled to see he put her case on the front page of his paper. Later, Molly drops by with flowers for her mom for good luck. Julian heads to work, and Alexis leaves to take a call related to the case. Kristina drops by and Molly pressures her sister to open up to their mother, as she is suspicious about the independent study. Kristina tells her Sonny is as well. Molly feels her parents will understand, but Kristina isn’t sure herself if she is gay or not, and she wants to figure it out before she explains it to others. Later, Sonny arrives and demands Kristina tell him and her mom what she’s keeping from them.

Sam finds Jason at his new place working on his bike. She helps him, and they end up sharing a kiss. Later, some framed photos are delivered, and Sam is shocked by them and asks when he got them. He saw them in an antique store window and liked them, and wonders what the big deal is. Sam tells him these are his old photos from his penthouse.

Nina arrives at Crimson and finds out about the latest issue. Maxie says the printer claims she ordered it this way, and they won’t fix this unless they pay for a second printing. Nina says Julian will have to fix this. Julian walks in and refuses, as they aren’t swimming in money here. He tells her to make this work, and that he has faith in her. Julian leaves, and Maxie realizes someone is sabotaging this magazine.

Maxie tells Julian her theory that someone is sabotaging them.

Sonny confronts Kristina about her secret.

Sam tells Jason that she wants a divorce.