Summary for Tuesday March 15, 2016: Griffin confesses his secret to Anna, Laura wonders what Helena's game is, Julian conspires against Crimson, and Ava keeps a vigil by Kiki. 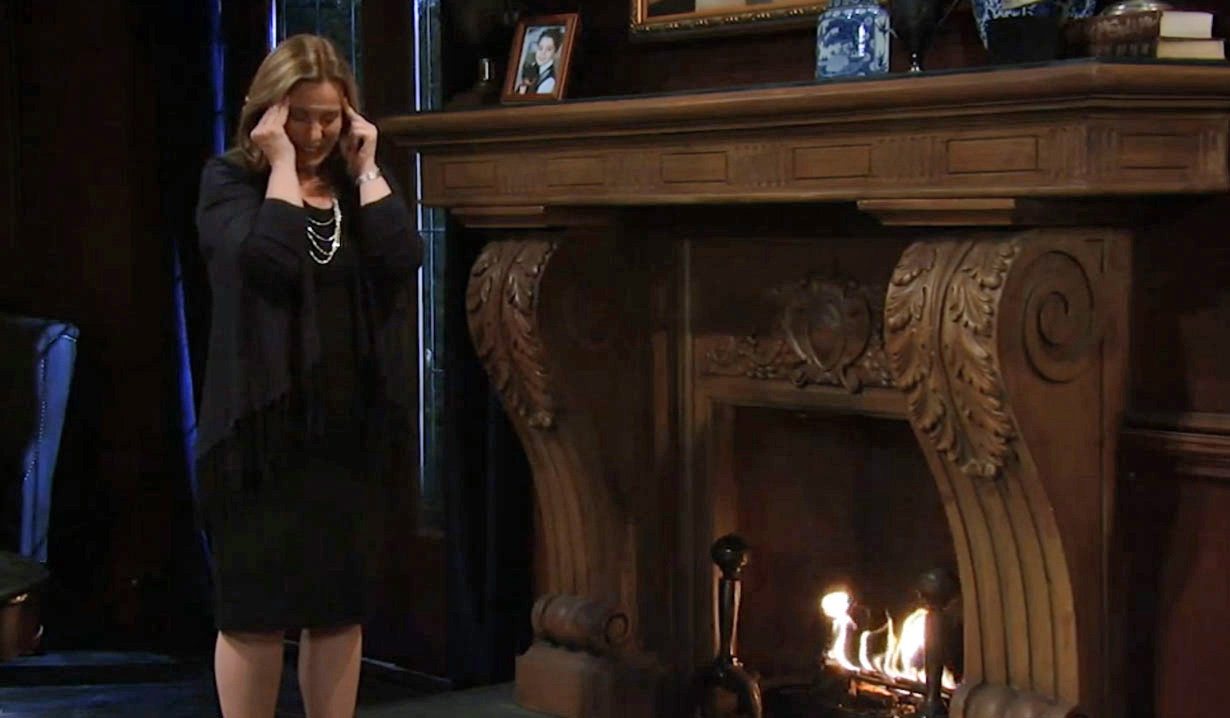 At GH, Kiki manages to say Morgan’s name. Ava fetches a nurse, who says involuntary speech is to be expected. Ava demands to speak to the doctor, who she hasn’t seen in days.

Sonny visits Morgan at the mental hospital. Morgan feels like he has no future ahead of him and can’t live like this. Sonny promises his son that feeling will pass. Morgan doesn’t believe so as he is a screw-up and only hurts people.

At the PCPD, Valerie is fit for her dress blues and is about to graduate. Dante tells her that she’ll make a great cop. He shares his good news, that he and Lulu are back together. They both agree that they still care about one another, and hope they can remain in each other’s lives as friends.

At Wyndemere, Laura worries about Helena’s key walks out of the living room. Hayden gets a call from Curtis, who asks to see her as it’s an emergency. Hayden tells Nikolas that she has to run out and he should check on his mother as she seems very unsettled by the will. Laura continues to fret about the key, which Nikolas tells her could open nothing. Laura knows whatever Helena has planned for her is out there waiting.

In his office, Julian makes plans to sabotage Crimson again when Alexis walks in holding the dagger Helena left her. Julian asks her what is wrong, and she tells him about Helena’s will. Alexis says that’s not why she’s here though. She lets Julian know that Olivia’s case is tomorrow and she’ll be busy prepping all night for it, but she needs coverage in his paper. He agrees. After Alexis takes off, Julian gets news that his latest plan for the magazine is a go.

Near the docks, Anna confronts Griffin having recognized his middle name as a Lavery family name. Griffin admits that Duke was his father. He explains that he never knew his father, and after his mother died he received a letter from her explaining the story about her and Duke. His mother never told Duke about becoming pregnant, and by time she planned to tell him, Duke had moved to Port Charles and fallen in love with Anna. He says his mother decided to never tell Duke and raise him on her own. Anna feels terrible for him. Griffin hopes by knowing her that he’ll get to know his father. Before they can talk about Duke, Griffin is paged to the hospital. Griffin takes off, but leaves behind his mother’s note. Anna reads the letter, in which Griffin’s mother says as long as she had him that she was never alone, and Anna is touched by it.

Hayden meets Curtis outside of a deli, where he asks her to co-sign on an apartment as he has bad credit. She can’t believe he called her away from her husband for this, as he’s having a hard time because his grandmother cut him out of her will. He says that must stink as that is what she married him for. Hayden agrees to co-sign his loan, buts says she will call in this favor one day. She takes off, and Valerie shows up. Curtis asks her to join him and celebrate his new apartment. He asks her for a second date, and she agrees.

Griffin returns to GH to speak with Ava, who is furious that nobody seems to know what is wrong with her daughter. He examines her again, but still can’t give her an outcome as to when she will come to. He tells her all she can do is be here with her and encourage her to get better. Later, Anna shows up at the hospital and gives Griffin his letter back. She admits to reading it, and tells him how much his mother loved him. Anna tells him that Duke was great with her daughter and grand-daughter. She admits they were going to have a child, but she lost the baby. She tells Griffin that Duke would have been proud of him. Back in Kiki’s room, Kiki keeps calling for Morgan. Ava gets an idea and calls Sonny, who is still with Morgan. She asks Sonny if Morgan would talk to Kiki over the phone as it could help her. Morgan agrees, and his voice stirs her awake. She tells him she’s been worried about him and asks to see him. Morgan smiles and promises to see her soon.

Hayden returns home and talks with Nikolas, while Laura continues to wonder what Helena’s key goes to. She considers tossing it into the fire but doesn’t.

Maxie is excited to learn the new issue has arrived.

Epiphany asks Liz what is going on between her and Franco.

Nina confronts Franco about going to Philly and not telling her.

Sonny asks Kristina what is going on with her.

Jason wonders what he and Sam can do with a spare ten minutes.