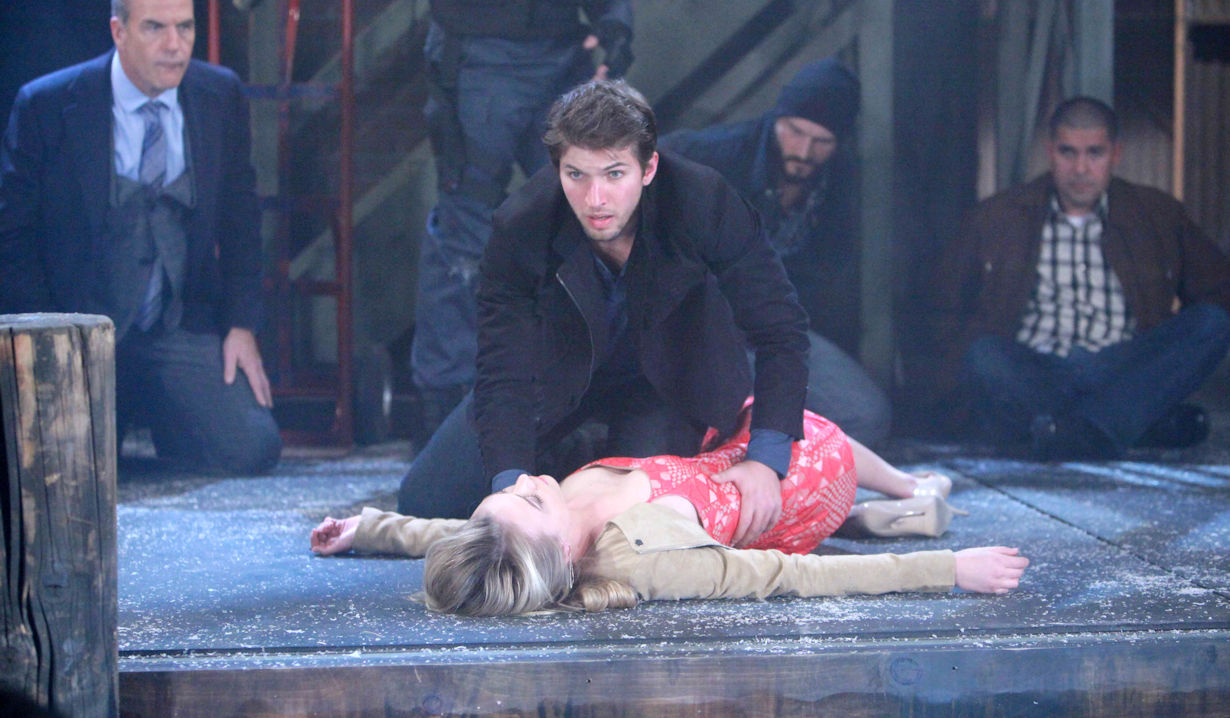 At the church, Kiki plays Morgan’s message then rushes out the door. Sonny glares from the back row as Alexis and Julian exchange tear-filled vows.

At the PCPD, Dante’s concerned because Lulu hasn’t returned his call. Jordan tells him to relax, Lulu probably hasn’t checked her phone yet. Dante, worried, texts Lulu again. Jordan rushes out after receiving a call that someone heard shots fired at Pier 54. Dante follows close behind.

At Sonny’s, Michael is on the phone with Kiki. She tells him Morgan is at the pier and he said something is going to happen at 6 pm. Anna makes the connection that Morgan is going to try to interfere with the gun shipment. Carly insists on going to the pier with Anna and Michael and they all rush out the door.

On board the Haunted Star, Raj has Lulu gagged and chained to the rail. He looks at her phone when Dante texts, then tosses it overboard. As he scans the pier with binoculars he sees Morgan holding a gun on Dixon. Angry that the plan is unraveling, he tells her he has to leave before the police arrive. He unchains her, leaves her gagged and tosses her overboard. She hits bottom, pushes herself back up for air and rips off the gag. She cries for help. Dante, who’s on the boat now looking for Lulu, doesn’t hear and Lulu sinks again. She surfaces again and gasps for Dante but he still doesn’t hear her. As she goes down for the third time, all the special moments she and Dante shared start to flash before her eyes.

At the Pier, all hell is breaking loose. Morgan has a gun pointed at Dixon. He disarms Dixon’s goons and orders one of them to open a crate. He sees all the guns and says they’re his now, this is his father’s territory. Dixon asks him what he’s going to do with them. As Paul tries to talk some sense into Morgan one of the goons tries to jump him. Morgan shoots but misses. He becomes increasingly manic and orders all the goons back against the wall. While he’s distracted Dixon grabs Morgan’s gun and knocks him to the ground, but Morgan bounces back up, fighting. As Morgan, Dixon, and Paul are all shouting, Kiki rushes from around a corner. Surprised, Dixon shoots and hits Kiki. Morgan, completely out of control now, grabs her and eases her to the ground. Anna, Carly, Michael, and several agents rush in and force everyone to the ground. In the momentary chaos, Dixon escapes. Over by the crates, Paul explains what happened to Anna. They suddenly realize that Dixon isn’t there. Jordan arrives, upset that neither Anna nor Paul told her what was going on. Carly yells that Kiki needs an ambulance. Paul orders Jordan to get Morgan out of there and take him to the station for questioning. Morgan is freaking out. He can’t leave Kiki. Michael tells him they have to cooperate and they drag him away. Carly looks with horror at the crate of guns. One of the agents tells Paul the mission was a bust. The six creates of guns do them no good unless they find Dixon.

Just as Alexis and Julian are sharing their first kiss, Dixon runs into the church and starts firing into the air. He orders Julian, Alexis and Reverend Austin into the corner. He tells Sonny he should have had Morgan keep his nose out of his business. Sonny tries to calm Dixon, but he doesn’t listen. Dixon is thankful he has so many hostages. When he sees Ava he asks her if she was helping Paul collect evidence for the Feds. Ava looks petrified at this revelation. Dixon asks everyone their names but stops before he gets to Franco and Nina. Franco pipes up. He’s insulted but he has a suggestion. He suggests that Dixon let everyone go and only keep one hostage. Ordinarily he’d nominate Sonny because he’s loaded and he’s a horrible human being but he’s in a wheelchair so that’s problematic. He suggests Dixon take Julian instead because Julian’s a jerk. Dixon knows Franco was only trying to create a diversion and tells him to shut up. He has everyone turn over their cell phones. Police sirens blare in the distance and Dixon begins to panic. Sonny, trying to calm him down again, suggests that Dixon let everyone go and keep just him for a hostage. He’ll get a car with clean plates and two million in cash. While Dixon’s distracted Nathan tries to jump him. Dixon turns, shoots, and Nathan hits the floor. Dixon orders everyone to stay seated but allows Maxie to go to Nathan’s aid. He turns then and points his gun at Sonny’s head.

Ava volunteers to be a hostage.

GH Recap: Dixon gets a surprise when...