Summary for Friday February 12, 2016: Molly accuses Kristina of being gay, several residents gather at The Floating Rib for Valentine's Day, and others are invited to the reading of Helena's will. 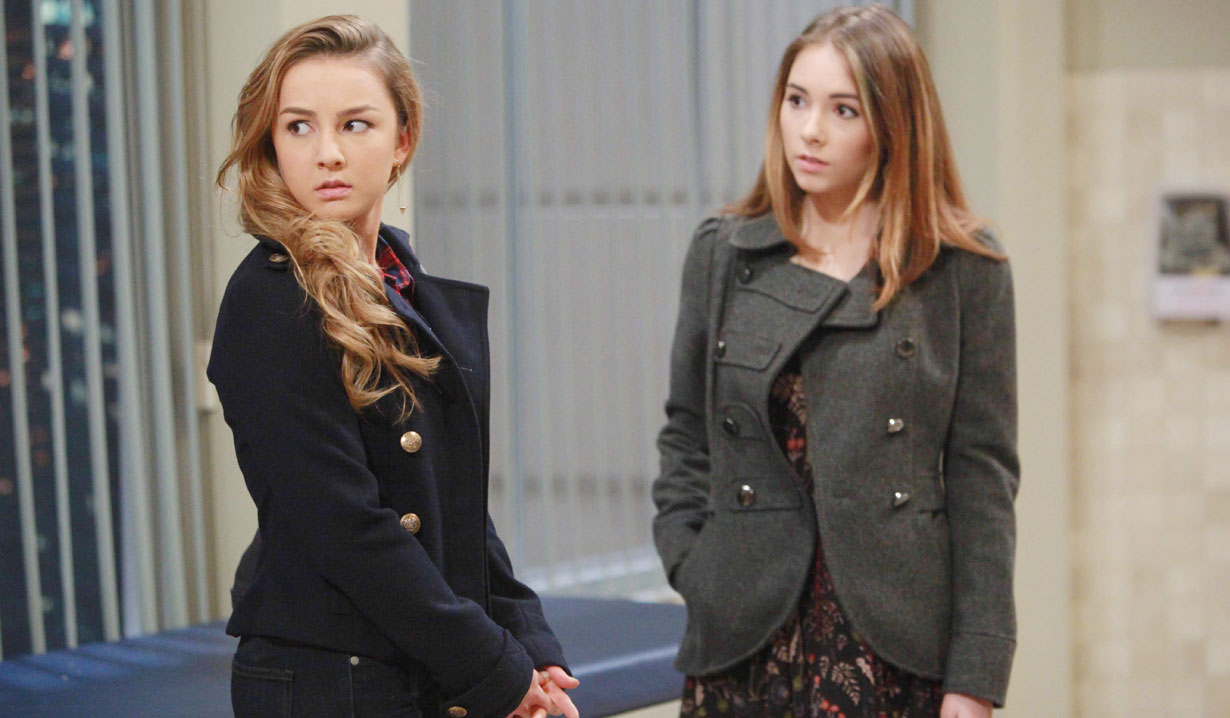 Maxie, Nathan, Dante, Jordan, Andre, Valerie, Curtis and TJ all end up at The Floating Rib for Valentine’s Day. Jordan is there on a date with Andre, and is upset to see Valerie with Curtis. Jordan tells Andre that he is her former brother-in-law, and that he was with the DEA and recruited her. However things didn’t end well between them or her and his brother Tommy. Meanwhile, Maxie heads off to put a plan in to action, so Nathan and Dante play a game of pool.

At Wyndemere, Laura informs Nikolas that she’s been invited to the reading of Helena’s will, so either Helena changed it, or this is one of her games. Laura leaves, and Nikolas brushes off his mother’s worries as the Cassadine estate is always passed down to the eldest male heir. He assures an inquisitive Hayden that he is financially secure, that he has Helena’s will in his safe, and then carries her to the bedroom to make love. After Nikolas falls asleep, Hayden sneaks out.

At GH, Molly confronts Kristina about Parker and realizes her sister is gay. Kristina claims the “P” in her diary is for Peter. She assures her sister that she’s not gay, and suggests maybe Molly is the one in the closet since she won’t sleep with TJ. Molly tells Kristina if she won’t talk to her, then talk to someone. Molly storms off, and gets a call from TJ to suggest they go somewhere else for dinner, as The Floating Rib is packed. In her room, Sam asks Jason to help her get out of the hospital. He thinks it’s a bad idea, but when he realizes she will not let this go, he agrees to help her sneak out. Lucas catches them trying to make a getaway, though he agrees to discharge her as long as she gets rest. They rush off. Liz arrives to visit Sam, only to find out from Lucas that she left with Jason. Later, Liz gets a call from her insurance company, who is trying to deny her coverage claims. Elsewhere, Brad and Lucas meet up to celebrate the day, but Brad feels Kristina may need to talk to him about something, as she’s been sulking in a corner nearby. Lucas and Brad go over to see her, and she asks them how it was for them when they were figuring out they weren’t straight. She claims she is asking for a friend, who is questioning things after a recent experience. They relay their coming out experiences to her. Lucas tells her that it takes bravery to come out, but it can be rewarding to build a better relationship with your family and friends. Later, Kristina calls Sonny and leaves a message, but stops from coming out to her dad.

Laura arrives at the Haunted Star to see Lulu and tells her about Helena’s will. Lulu realizes Scott delivered her papers as well, but she never opened them. Laura says she may have been invited too, and she plans to go to the reading, which Lulu is against. Later, Maxie arrives and persuades Lulu to pamper herself by giving her a room key to the Metro Court where a massage is waiting for her. She claims Lulu needs this, and it will give her and Nathan some alone time. Lulu gets the hint and takes off. Maxie calls Nathan at The Floating Rib and tells him what he needs to do next.

Jason takes Sam and Danny home, and he insists that she relax while he watches Danny. Later they talk, and Sam feels conflicted about how to feel about him. Jason says he may not remember his past, but he knows he likes to be close to her, and the two kiss.

Back at the Floating Rib, Nathan tells Dante about a break in at the Metro Court, and Dante offers to take it, so he sends him to the same room Maxie sent Lulu. Meanwhile, Valerie is shocked to learn Curtis used to be a cop, and she reveals she’s a cadet. He makes a snide remark about her chosen line of work. When Valerie excuses herself to use the bathroom, Jordan takes the opportunity to warn her about Curtis. She suggests Valerie ask if him if he’s still into cocaine the way he used to be.

Molly and TJ go to the Metro Court for dinner, but it is packed too. Molly suggests instead of dinner they go back to her dorm and have sex. TJ excitedly says they should split. Elsewhere, Dante and Lulu run into one another at the room at the Metro Court, and once inside, Nathan and Maxie lock them in.

Laura drops by the hospital to check on Liz and Jake. She asks Liz to go to Wyndemere to rest, as she needs the break. Liz can’t help but remember the last time she left Jake here that she lost him, but Laura says that won’t happen.

Liz heads to Wyndemere and catches Hayden attempting to break in to Nikolas’ safe.

Hayden tells Liz that she is no longer a guest at Wyndemere.

Andre faces off with Curtis.

Lulu and Dante are trapped together in the Metro Court room.