Summary for Monday November 9, 2015: Paul offers Anna a deal, Ava goads Sonny at her hearing, and Carly tells everyone the truth about Jake. 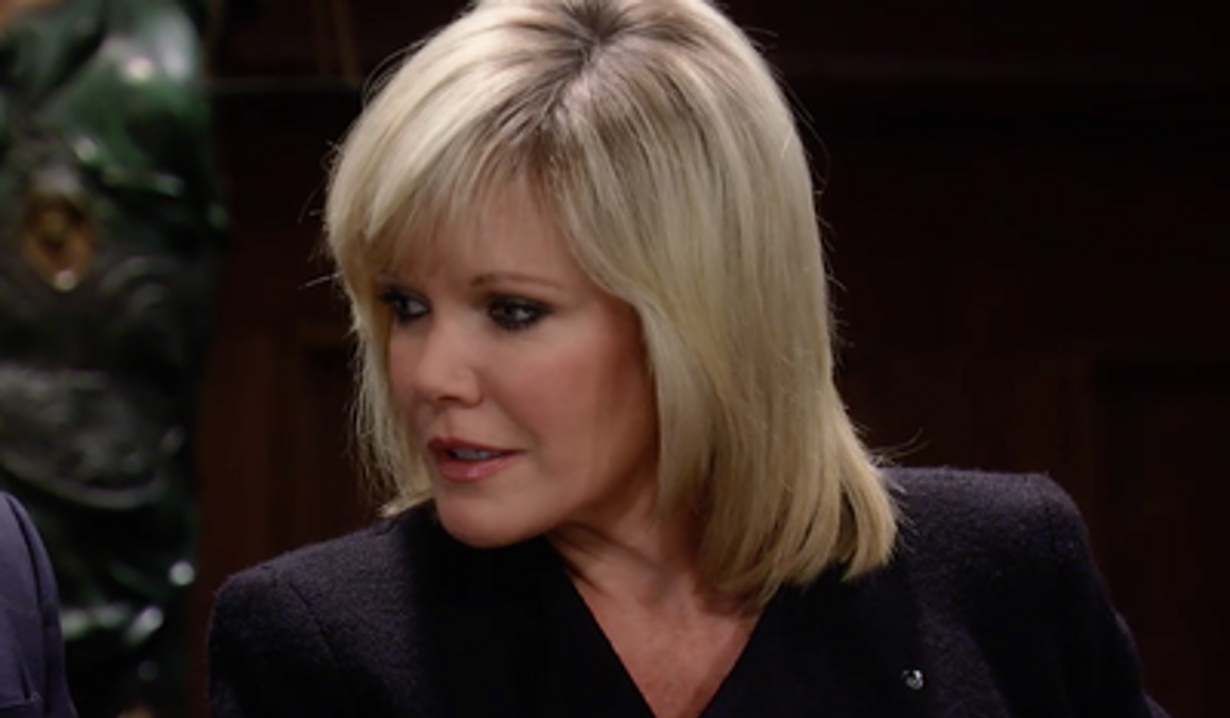 Anna eavesdrops as Ava and Paul make out in his office. Ava pulls away before Anna enters. Once Jerome leaves, Anna starts lecturing the DA for ‘oozing innuendo’ and refuses to let him hold Carlos’ murder over her. When she threatens to confess, he wonders how Emma would feel about it. She accuses him of threatening her granddaughter and that raises his ire. Anna threatens to kill him if he goes near Emma. Paul justifies her killing of Carlos and reminds her of all the good she’s done. She feels haunted. He’s sure that’s more punishment than prison and tells her how much Emma needs her. Paul wants them to work together. She thinks that would be compromising her ethics. He thinks it’s a little late for her to think about that.

Jake arrives at the church as Carly trails behind him. Liz is eager to go ahead with the wedding but Jake stops her. He’s discovered who he is. After much build-up, Jake announces that he’s Jason. Liz acts surprised. Sam is actually baffled. Carly lays out the evidence. Sam has been dreaming of this day and wonders if Danny has known all along. Liz says that little Jake seems to have known all along. Tearfully, Sam asks him if he remembers their life together. He doesn’t and he doesn’t feel Jason’s feelings. She runs off in tears. Jason is furious about what’s been done to him. He lunges at Nikolas and puts him into a headlock to demand some answers. When the prince wriggles free, he insists on his innocence. Carly threatens to make him pay if he’s lying. He chuckles at that one. Before he can exit, Sam says she’ll never forgive him if he knew about this. Once he’s left, Carly tells Liz she can’t keep playing house with Jason. Liz is adamant that this doesn’t change anything. Jason leaves to think things over. The nurse trails after him. Lucas keeps Carly from following them and tells her that the custody hearing is on right now. She gives Sam a hug and runs off. Patrick tells Sam that he’ll be there for her.

Liz finds Jason on the bridge. “I’m so sorry,” she tells him.

Sonny is at the courthouse in his wheelchair, complaining about the lack of ramps. His family crowds around him. They wonder where Carly is and realize they haven’t heard from her for a day. Ava strolls by but stops to goad Sonny and Morgan. As Sonny strokes his beard, Ava joins Scott and Julian in the corner. Her brother suggests working something out now before Corinthos tries buying off the judge. She’s sure getting full custody is the only way. They all head into court and it’s brought to session. Kiki arrives and Ric brings up Morgan, who hypes up his father and mentions the murder case against Ava. Scott points out that Sonny murdered AJ. There’s sniping and then Michael takes the stand. Scott questions him about his shooting and his attempt to keep Avery away from Sonny. Michael tries explaining and spins everything to mean that Sonny would do anything for his children. When Kiki is brought up, she declares that her mom has ruined her life and should never be allowed to raise another child. Sonny and Ric get giddy. The judge calls a recess. Sonny thanks Kiki. She snubs her mom and leaves. After everyone exits, Ava switches something on in her purse and saunters over to Sonny. “Apparently you’re Saint Joseph and Bob Cratchet all rolled into one!” she taunts, suggesting that their daughter will have to take care of him now that he’s crippled. She wonders how long Carly will stick with an invalid who can’t satisfy her. He threatens to kill her. Carly walks in on this.

Nikolas and Hayden return to Wyndemere. She’s impressed by how he defended himself. They kiss. She pulls away and wonders how long it will be until Jason discovers that he and Liz have known the truth for months.

Liz and Jason struggle with their circumstances.

The custody case for baby Avery reaches a boiling point.

GH Recap: Jake learns he is Jason on...