Jason and Amelia Team Up.

Kate asks Carly to come over, Lulu stands up for Logan, and Jason gets a lead on Jake. 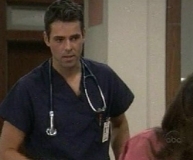 (The first 8 minutes of today's episode were pre-empted by national news.)

Robin and Patrick are arguing over the fact that Robin gave a case to Noah rather than him. She tells Patrick that he takes unnecessary risks to prove that he's better than his father. She says that she thought Noah was the best surgeon for the procedure and she called him even though she knew it would make Patrick mad at her. Later, Patrick finds Robin and tells her that he made a gesture that she might appreciate. He went to Noah and offered to assist on the case. Patrick says that in Noah's time, he probably was a brilliant surgeon. Robin hugs him and says that she likes to see some humility in him.

Sonny has Jerry in his office and is warning him to stay away from Carly and his sons. When Jerry's mouth continues to run, Sonny punches him in the gut. Jerry says that he sent Jax away so that he wouldn't be caught in the middle because "like it or not, you and I are practically family." Sonny punches him again and Jerry explains that he wants to be a part of Jax's life and has no intentions of hurting Carly or the boys. He says that he came forward as Jerry so that James Craig and his crimes could "die a natural death." Sonny gets right in Jerry's face and tells him that he's still breathing, but warns that Jerry should "…consider me provoked." 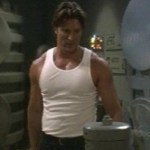 Carly and Jason are still locked in the boiler room. Carly has told him to put his shirt back on because his neck is too big -- he has too many muscles. She rambles for a while and finally a custodian comes in and finds them there. Jason runs out as fast as he can so he can go look for Jake.

Sam and Amelia are on the set arguing about how to handle Maureen. Amelia wants Sam to call her and convince her to allow their taped segment to air. Sam says that the woman has suffered enough already and if she doesn't want to be on the air after losing her child, she shouldn't have to. Amelia tries to slam Sam for suddenly having a conscience, but she sees that Liz and "Detective Spencer" have just shown up. They want to make an on-air appeal about Jake and Sam tells them no! Amelia overrides her and offers an entire hour segment to discuss kidnapping. Sam yells that Amelia just wants to use their pain to drive up the ratings. Liz says that if it works, she doesn't care! Sam jumps up and tells Amelia if she runs the show about Jake, she'll quit. Liz can't believe that Sam would dig her heels in on this and tells her to "go to hell". After Liz and Lucky leave, Sam tells Amelia that she just wanted to jerk her around by doing a segment on Jake. Amelia tells her to grasp the fact that everything isn't about her.

Lulu is in the middle of an argument between Spinelli and Logan. Surprisingly, she defends Logan and tells Spinelli not to compare Logan to the despicable Scott Baldwin. Logan adds that Scott Baldwin merely got his mother pregnant and that doesn't make a father. Spinelli backs down like a spanked kitten.

Tracy has called Scott into her room at Shady Brook. She shows him her files and he insists that he doesn't have a son and that all she has is proof that he was in Texas in the 80's. She tells him to drop the charges against her or she'll go public with his deadbeat dad persona and he'll lose his job. Just then Lulu and Logan show up and Scott says, "Is that the loser you hired to impersonate my son?" Logan snaps that he would never call a loser like him his father. Scott threatens Logan that he'll go to jail for fraud if he runs around town acting like his long-lost son. Then, he storms out the door and Lulu apologizes to Logan. He says that he got what he was looking for and then leaves with his head hanging down. Tracy tells Lulu that if Logan is truly Scott's son, he is valuable leverage. Lulu says that it doesn’t appear that Logan wants anything to do with the whole thing. "You're a smart girl, you'll find a way to get him to cooperate," Tracy smiles.

Kate is at home working with Clarisse. When Kate sees that Carly has arrived, Kate dismisses Clarisse. She called Carly over because she thought that she might like to know what Sonny is doing to her brother-in-law. She says that Sonny threatened to cut Jerry's heart out and Carly tells her that Jerry has it coming because he's a dangerous man. "Apparently so is Sonny," Kate says. She asks how she could have been married to Sonny for so long without being appalled with what he does for a living. Carly says if she has a problem with what she saw today she should walk away before she gets too involved.

Jason busts into Sonny's office to tell him that Jerry is back. Sonny says that he knows. He says that Kate overheard him threatening Jerry so they may have a problem if Jerry shows up dead. Jason says that he would help, but he needs to focus on looking for Jake…and he's starting with Sam. Sonny says that their people have been watching Sam and haven't found anything.

Liz and Lucky go home, stunned at Sam's reaction. As soon as they get in the door, Liz jumps down Lucky's throat for not arguing harder with Sam about getting on the air with a plea. He says that he's not a thug like her good friend Jason. Liz grabs her keys and leaves.

Spinelli is hard at work on bank records looking for bank account wire transfers. Sam comes home and Spinelli is embarrassed to be working on "the small Stone Cold One's" case. As soon as the words were out of his mouth, he is sorry to have called the baby that and Sam tells him it's okay. Spinelli tells her that Jason really loves her and she says that she'd like to be left alone. Before he goes, Spinelli says that the baby is a miracle and he can mend all hearts.

Amelia is working on the set alone. She calls Maureen to make her plea one more time. She says the segment they taped is truly powerful and it could help other people from losing their baby in a fire. A baby cries in the background and Maureen nervously says that she has to go.

Liz goes to Sonny's office and is surprised to see Jason there. Then she explains that Sam turned them down to do a segment on "Everyday Heroes". He assures her that she's a great mother and that they will find their son. She leans in to him and he puts his arms around her.

Kate is on the phone talking to a realtor. She's saying that the extensive remodel is off and now she wants to sell the house ASAP. Sonny has come onto her terrace and overheard. She explains that she has no desire to live next to him, but he says that she has a lot of desire.

Liz goes back home and finds Lucky on the phone investigating Amelia Joffe. He is excited as he explains his new theory to Liz. He thinks that since Amelia is only interested in ratings, maybe she set the whole kidnapping up so that she could air it and gain ratings with a big reunion show afterwards!

Jason goes to Amelia and asks where she was when Jake disappeared. He contends that she hates Sam so much that maybe she is framing her. Amelia says that she doesn't hate Sam badly enough to go to prison. She tells him that she was visiting him in jail when Jake disappeared and then she came straight to the studio and NOT through the park. She proceeds to tell Jason that she was just on the phone with a woman who was recently on the show after losing a baby. She says that she heard a baby on the phone and her remaining children are all older. She says that she needs to call the police right away, but Jason tells her to tell HIM where this woman lives.

Carly goes back to the boiler room to find her purse. Jerry goes in and closes the door behind him.

Sam is at home remembering the moment she was watching Jake through the bushes and saw Maureen steel him. To shut out her memory, Sam curls up with a big pillow…and her cocktail.

Maureen is at home trying to calm crying Jake. She's begging him to be quiet until "Mommy" can get them away from there.

Sam goes to Alexis for legal advice because she witnessed a crime.

Jason and Amelia get in the car and go for a drive.