Tracy thinks she has the goods on Scott; Lulu asks Logan about his father. Carly calls Jason for help with Jerry; Jerry charms Kate. Maxie offers advice to Sam. 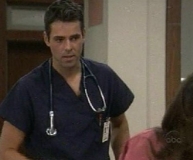 At the hospital, Patrick and Robin argue over a patient's care. He tells her that she cannot not be the best doctor or have the best ideas. Frustrated, Robin tells him that he is conceited and egotistical to believe that she wants to be right more than she wants to give her patients good care. Patrick leaves to get ready for surgery. They meet up again later and Patrick learns that Robin has consulted with his father!

Maxie tells Logan she wants to watch him with Lulu! Sonny arrives, wondering what is going on between the two of them. He orders Logan to get back to work and Logan orders Maxie out of the coffee house. She leaves. Logan follows Sonny, apologizing for talking to Maxie rather than working. Scott arrives and orders Logan out of the office! Logan leaves. Scott accuses Sonny of being involved in Laura's kidnapping and offers a deal: help him get Laura back or Scott will send Jason up the river for Alcazar's death! Sonny tells Scott he has no idea where Laura is but Scott doesn't believe him. Scott tells Sonny that once Jason in jail it will be open season on him! He lets Sonny know that he is gunning for Ric's position and he'll use Sonny, Jason and anyone else to get it! "Wise up, pick up the phone and call me," Scott says. He opens the door, surprised to see Amelia standing there. Behind his back, Sonny puts his finger to his lips, telling Amelia to keep quiet. Scott leaves. Amelia tells Sonny about Kate and he brushes it off. In the hall Scott and Logan have another run-in. Logan tells Scott he doesn't owe him anything and Scott threatens to hit him!

Carly tries to separate Jerry and Michael. Carly takes Michael upstairs. She returns and demands that Jerry get Jax back for her. "Tell me where Jax is or get out of my house," she says. Carly threatens Jerry, who could care less. He admits that he sent Jax on a wild goose chase to keep him away from Port Charles for a while. Carly can't believe it! He tells her that he sent Jax away to protect him from Sonny and Jason! He leaves her to consider her options - help him or lose Jax!

Jason and Spinelli brainstorm options for the kidnapping of Jake. Spinelli believes Amelia is behind the kidnapping but Jason is still focused on Sam for the crime. Sam arrives home surprised to see Jason out of jail. Sam asks if he still thinks she is behind the kidnapping. Jason tries to leave but Sam stops him, telling him that chasing after Jake is a sure-fire way to put the truth about Jake out in the open. Spinelli interrupts them and Sam orders him out of the condo. Jason tells her to calm down but she can't. She can't believe that Jason has lost all of his faith in her. They argue and Sam tells Jason that he is accepting Elizabeth's story too easily. She thinks he needs to question her about what happened rather than questioning Sam! "I know that you're hiding something from me," Jason says and asks her to trust him. Before she can answer Carly calls him and drops the Jerry bombshell. When Jason begins to leave Sam tells him to choose - Carly or her! Jason leaves the condo.

Amelia is meeting with another producer when Kate arrives with a proposition - that Amelia publicize her affair with Sonny! Amelia walks away in disbelief but Kate follows. She refuses to admit to any kind of relationship with Sonny. If she won't, Kate suggests that she leave Sonny alone to find a new woman! Both leave. Sam arrives at the station, annoyed to find Amelia gone and the other producer giving orders. Maxie comes in with a garment bag which Sam sends away with orders that she begin picking out her own clothes and choose her own stories. The producer leaves but Maxie stays. Sam confides in her a little bit and Maxie suggests she just leave Jason! Comparing Sam and Jason to her and Lucky, Maxie tells her she is setting herself up for a lot of hurt by sticking around! Later Amelia returns, annoyed to find Sam at work but not working. She tells Sam to get to work or get out. Rubbing it in that Jason didn't call her from lock-up and reminding her that she is losing him, Amelia gives Sam orders to call a story contact. Sam refuses!

Kate heads to the Metro Court. As she talks on the phone she literally runs into Jerry. His charm flatters her and Kate begins to flirt a little bit. Jerry appears to be just as taken with her. He asks her about her acquaintance with Jax. They talk for a bit and Jerry asks her out for a drink. Kate realizes they are garnering a lot of attention, believing they are focused on her. Jerry set her straight, telling her that the staff is focused on him because they think he's homicidal! "You don't seem the type," she says as they sit down. Jerry tells her about his resemblance to the hostage taker and Kate doesn’t think anything about it. She invites Jerry to her home once it is ready for public viewing. Kate leaves. Jerry writes a check for the broken window and delivers it to the concierge to give to Jax. As he walks out two thugs approach and order him to come with them. The thugs march him to Sonny's! Jerry plays it cool. Sonny threatens Jerry, not realizing that Kate is right behind them! 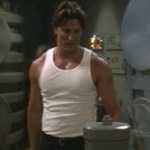 Carly vents to Jason in the boiler room of the Metro Court. She tells him that Jerry lured Jax out of town and fears Jerry is up to something bad - again! Carly details her meeting with Jerry and Jason doesn't believe he is a serious threat. He tries to leave but they are locked inside! Jason can't believe she put such a strong lock on a boiler room and begins looking for a phone. She tells him where the phone is but tells him it isn't wired yet. He tries the cell phone but there isn't a signal. Carly grabs a chain to begin banging on the door but accidentally opens a steam vent instead! Jason shuts off the vent using his shirt as Carly begins banging on the door.

Lulu wonders how Tracy finding Scott's long-lost son will get her out of the sanitarium. Lulu has questions about the son, wondering who he is and how he'll react to Scott being his father. Tracy could care less how the son reacts as long as the knowledge of a child gets Scott to drop the charges against her! Later, Alan appears to Tracy, wondering why Lulu is so preoccupied with the Scott situation. He tells her that the scheme won't work. "I am your reality check," he says. They argue. Scott walks in, wondering why she isn't tired of the crazy act yet. He tells her their deal is still open. She counters with a deal of her own. Tracy shows him the PI report and tells him about his unknown child. She tells him to get her released or she'll go public!

Spinelli returns to the condo only to find it empty. He begins to work but Lulu interrupts, wanting his help with her own problems. She asks Spinelli to take a break from the search for Jake in order to do a background search! She wants him to connect Logan with Scott but no matter where he searches Spinelli can't connect them. He suggests that Lulu is mistaken but she is certain that Logan is Scott's long lost son! Spinelli tells her it isn't true. Logan arrives. Lulu asks Spinelli to leave and then vents her anger at Logan for treating Spinelli badly. She asks Logan about his family and tells him that she believes Scott is his father!

Jason and Amelia Team Up.