Luke remembers back to the night his mother died and his father ran out on their family. The truth of that night is finally revealed. 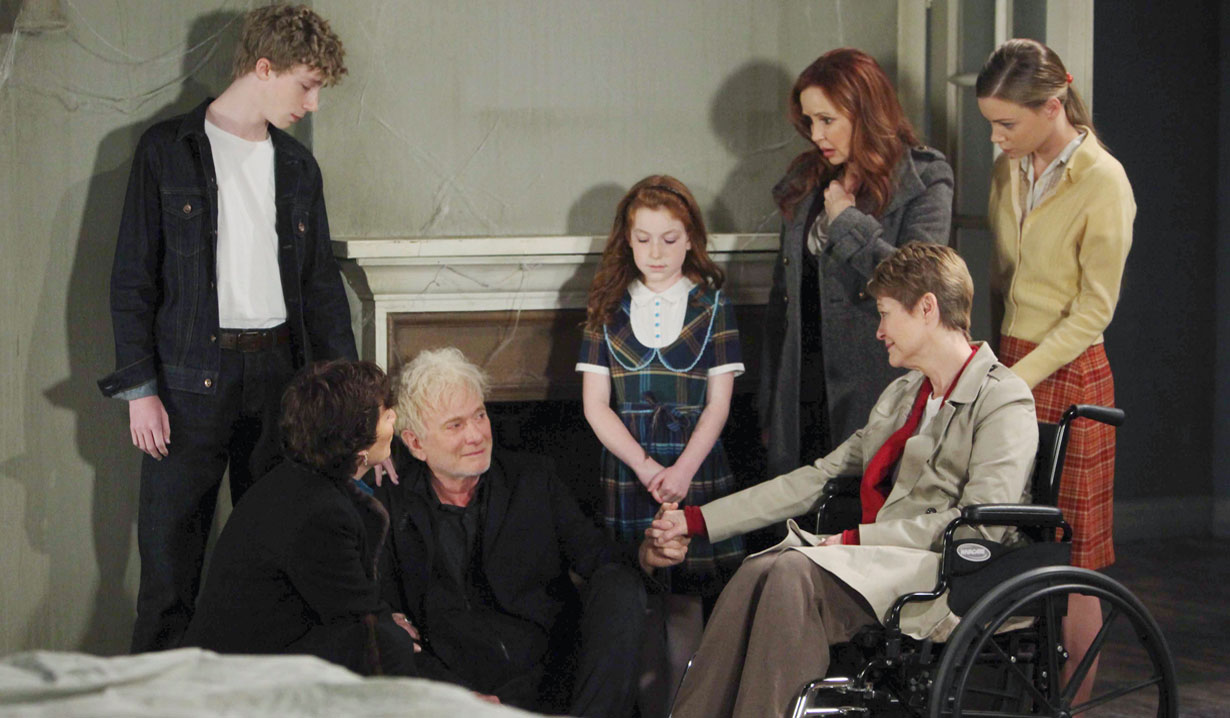 Luke arrives at the old Spencer house and is warped back in time to 52 years ago. A young Luke arrives home from a ballgame and his mother scolds him for being late to dinner. Pat and Bobbie walk in, and their mother Lena demands Pat change out of the pants she is wearing, as her father will not approve. Suddenly their father Tim arrives home from work and is upset that dinner is not waiting on the table. Later the family sits down to dinner where Tim spouts racial slurs about being forced to work by a bunch of immigrants on the docks. He also rants about his spoiled kids and his wife’s terrible cooking. When he insults Luke for being a poor ball player Pat defends her brother and calls their father an old drunk. Tim slaps Pat and curses at her. Lena rushes to protect her daughter.

At Oak View, Bobbie, Lulu and Tracy ask Patricia to tell them what happened in the old house to make Luke this way. Pat says it’s only fitting it comes out today as the worst day of their lives happened 52 years ago today on April 1, 1963. Bobbie says that was the day momma died and daddy ran out on them. Bobbie remembers their father hitting Pat at dinner, but nothing else. Pat says Luke sent her upstairs, so she didn’t see what else happened. Pat tells them that their father turned all his rage on their mother that night, that he was furious that she always defended her children. Bobbie says that’s when he beat her until her appendix burst, and then he just left her for dead. Pat says that isn’t what happened at all.

In the past Pat ends up finding their mother bloodied and lying on the living room floor. Lena comes too and Pat demands to take her to the hospital. Tim refuses to let his wife leave, but Pat disobeys her father and takes her mom to the hospital using her dad’s car. Luke stays behind to watch Bobbie.

Pat and her mother arrive at General Hospital where Dr. Phil Brewer examines Lena in the middle of the waiting room. Meanwhile nurse Jessie Brewer talks with Dr. Steve Hardy about their teenage patient with the disfigured face. She says she refuses to turn on the lights and has the windows and mirror covered in her room. Suddenly Lena faints, so she is rushed into a cubicle. Steve explains to Jessie who the woman is, and that her husband likely did this to her. He asks Jessie to call her brother Fred Eckert to come, not the husband. Pat sits in the waiting room for news on her mother. Eventually Dr. Hardy tells Pat that her mother died due to the swelling in her brain. Pat is allowed to go in and see her mother to say goodbye.

In the present in Pat’s room, Lucas keeps trying to call his mother, so Bobbie finally answers the phone. Lucas tells her that a neighbor called him and said she saw someone going into the old Elm Street house. Bobbie relays Luke’s whereabouts to the family.

Back in the past, Luke cleans up the house so his mom doesn’t have to do it when she gets home from the hospital. The phone rings and Tim answers and is stunned by what he hears. Tim tells Luke that it was the hospital and that his mother is dead. Luke thinks his dad is lying.

At the hospital, the Eckerts arrive and Dr. Hardy has to give them the news about Lena. Bill approaches Pat, who she initially mistakes for Luke.

In the present, Bobbie and Tracy are stunned that Pat met Bill way back when, as they didn’t know about him until the nineties. Tracy asks what Bill has to do with any of this. Pat insists they go to the house where Luke is.

Back at General Hospital in the past, Pat is amazed by Bill’s resemblance to her brother, and that she even has a cousin. Bill says his family has known about her family, but Tim prevented them from visiting over the years. Pat realizes she has to get her brother and sister away from her dad. Bill says he will help her, so they leave together.

Pat and Bill arrive at the Spencer house and find Luke sitting in the corner crying and Tim dead on the floor.

In the present at the Spencer house, Luke thinks he couldn’t have killed his father, and that Tim ran off and abandoned them. He struggles to remember what happened when Tracy, Bobbie and Pat all arrive. Luke says he knows he killed their father, though he doesn’t remember doing it or what happened after. Pat tells Luke that when she realized that night that he had blocked out what he did that they stuffed their father’s body in the basement wall and sealed it up. Luke asks who helped her, and she explains it was Bill. She says that’s why she signed the house over to Bill in order to protect their secret. Luke thinks this makes no sense, as he never met Bill until much later in life. Pat tells Luke that she made a huge mistake that night covering this up, and now he must face it to put the past to rest. Luke remembers that as Bill died he told Luke to forgive himself for what he did to his mother.

Back in the past the pieces of the puzzle are filled in. Luke steps in between his father, Pat and his mother during their fight at dinner. Luke grabs his bat and threatens his father, but Lena grabs Luke from behind to calm him down. Luke pushes her away and accidentally hits her in the head with the bat, which causes her to fall over. Later after Tim receives the news of Lena’s death he lashes out at his son. He tells Luke he is a monster who killed his own mother. Luke loses it and kills his father with the bat.

In the present, Luke remembers everything and breaks down when he realizes he killed both his parents. Luke’s family gathers around him to console him as he sobs, "I did it, I'm sorry."

Jake has a dream (flashback) about Sam.

Please respect the Soaps.com guidelines when posting and contact a moderator if one is required to handle comment issues.

GH Recap: What Is Her Damage?

GH Recap: Living With It.