Emily is forced to choose, and (adopted) blood is thicker than water; Monica comes to the realization that Alan is the love of her life, and even if Alan survives his heart attack, can he live through a gun fight?

Luke and Lucky have made it to some kind of security room inside the Metro Court. As they can see different parts of the lobby on various monitors, Lucky starts to freak out when he sees that Elizabeth is in pain on the floor. Luke slaps him and tells him to get a grip. He says they have to be smart about how to proceed. Luke guesses that there's a goon at each corridor, so that's where they should begin, one goon at a time. Luke tells Lucky that they don't have much time; the cops are going to make a grand stand play before too long. Luke says that Lucky should table cop ethics for now and agree to only rescue their own. Lucky reluctantly agrees.

In the lobby, Emily is trying to stall for time in choosing between Alan and Liz. She asks if she can examine each, and at first, Craig refuses. After the female goon suggests it would be more entertaining to build the suspense, he agrees. Emily takes Alan's pulse and tells him that he needs the proper meds to limit the damage from the heart attack. He reminds his daughter that Liz can't give birth this early. He's clearly in pain, but pulls himself together enough to exchange loving conversation with Emily about who is the better doctor between them. Carly sits with Alan as Emily goes to examine Liz. Liz isn't able to speak very well, so Sam tries to explain how frequent the contractions are. When she can, Liz says her contractions are probably due to dehydration. She wants Emily to choose her father.

Down the hall, Spinelli is hiding behind a sofa watching Sonny bargain for his life with a goon. Jason is listening via earphones from his perch in the duct system. Craig comes in and asks the goon to tie Sonny to the chair while he goes to retrieve Carly to watch. (He lays his gun down on the floor.) As Sonny tries to talk the remaining goon down; Spinelli eyeballs the gun and fantasizes about how he could be a hero and win Sonny's respect and Lulu's love. (It's hilarious he does a few Jackie Chan moves and plays an uncharacteristically confident tough guy!) Before he can do his best to bring his fantasy to some kind of life, another goon enters the room and Spinelli remains cowering behind the sofa. The goons take Sonny and leave the room, and finally Spinelli is able to get the gun. Behind him, Jason returns from the duct and almost gets shot!

Monica and Edward are watching the Metro Court news on TV from home. Edward is upset and Monica is trying to keep him from getting too worked up. She reminds him that Nikolas is probably protecting Emily from harm. Alice adds that Mr. Luke is going to save them all. Tracy and Dillon arrive home and announce that the gunmen have agreed to release one hostage. As they wait, Dillon says that it's his fault that Lulu is in the lobby. He tells them that their plan was to steal Alan's PDA to see if his bank records can tie him to Rick Webber. Tracy thinks Lulu and Dillon are nuts for digging up an age-old case to what end? Dillon says that even if Laura can never be cured, Lulu needs to help her mother. Edward says that Rick Webber deserved what happened to him, even if Laura didn't deserve to get blamed for it. For Monica's part, she admits that she loved Rick, but married Alan anyway. Then she comes to a realization, "As it turns out, it was Alan I belonged with all along." They talk about the affairs and remarriages that the Q family has endured. Dillon remarks that he always thought Monica and Alan were married out of convenience. Monica defends her marriage and tells Dillon to talk to her after he's been married for decades. Edward adds that he always knew that Alan and Monica were a good match. Monica walks up to him and smiles. She says that maybe she and Alan have a once-in-a-lifetime love similar to Edward and Lila's, after all. She picks up her coat and goes to the Metro Court so that she can tell Alan her feelings as soon as he gets out.

Outside the Metro Court, Mayor Floyd wants to storm the building and Ric tries to remind him that lives are at stake. When the Mayor states that casualties are likely Patrick punches him in the mouth. The mayor wants Patrick arrested, but Mac says if Patrick hadn't punched him, he would've - so there will be no arrests. Ric agrees. Soon, Dr. Russell Ford comes to the scene and tells Patrick to report to the hospital for a medical trauma that has arrived. He tells Patrick that his license will be revoked if he doesn't get back to work. Patrick explains that Robin is a doctor on staff, and not only that, she will need him when she's released. Dr. Ford says that there are ambulances on hand to help Robin. And, from what he knows about Dr. Scorpio, she would want him to help his patients. Patrick can't disagree, and he ultimately goes back to the hospital.

In the lobby, Craig has decided to deposit Sonny back with the rest of them because he thinks it's funny to watch how devoted Sonny and Carly are together. Then he goes over to see what Emily has decided. Liz is pleading with Emily to choose her family and he shakes Emily by the hair to make up her mind for cryin' out loud. Nik jumps up to defend her and just as Craig is about to shoot him, the female goon speaks up and gets Craig to focus on something else. Craig ends up shooting Max in the shoulder, and Sonny crawls over to him to see if he can help. Carly has jumped up to help Max, too, and Craig thinks this is interesting. He toys with the idea of watching Max bleed to death or shooting Sonny in the head. Sonny tries to keep Craig on track and reminds him that the big event is supposed to be watching Emily choose between her father and her best friend. Emily stands up and says she has made her choice. Before she can speak, Lulu makes one last plea for Liz's baby.

From their own room, Jason and Spinelli are talking about how to proceed and a goon walks in the door and busts them. Jason reacts quickly knocks him out. They drag the goon behind the couch and Jason puts on his face mask. Before he leaves, Spinelli asks him to check on "The Blonde One." Jason tells him to stay on the monitor and be ready to supply some answers into his earphone. Just as the Jason leaves, the goon starts to wake up. Spinelli winds up his laptop like a baseball bat and whacks him in the head. "Stay down?" Spinelli hopes out loud as the goon tumbles back to the floor.

At the Q house, Tracy turns off the TV to keep Edward from getting too worked up. Edward says they are about to release a hostage, but they haven't mentioned Robin Scorpio. Surely it's not Alan or Emily, or Lulu, they agree. Then, Tracy changes the subject to family loyalty. She asks her father what if, hypothetically speaking; she knew that Alan did kill Rick Webber? She suspects that the family motto would be to keep the secret right? Edward concurs. He laughs and says that in that case she should simply blackmail her brother.

All eyes in the lobby are on Emily as she finally says, "ElizabethI'm so sorry." Craig wants Alan to walk out on his own, so Alan painfully tries to sit up, but says he can't do it. Emily screams to have someone help him, and Craig admires her passion. He reluctantly orders goons #4 and #5 to help Alan to the door. But first, in order to prevent anyone else from trying to flee when the door opens, he puts a on sniper lookout from the second floor window.

Outside, Mac alerts his team that there's movement at the second floor window. Someone asks if it's a hostage. Someone yells that it's a gunman. "Get ready to take him out," Mac commands.
Then, the goons push Alan out the door and into a courtyard. The sniper starts to shoot, and the cops return fire. (As Alan stands out in the open, the footage goes to black and white and in slow motion.) He reacts to sound of gunfire by clutching his chest and falling to the ground.

The gunfire can be heard inside the building.
Upstairs in the security room, Lucky and Luke look out the window and realize that Alan's been released and is having a heart attack in the midst of a gun battle. They yell through the window for the cops to hold their fire. In the lobby, Emily is screaming that they are shooting at her father. Amidst it all, Carly catches the eye of one the goons in a black mask and recognizes something about him. It takes her a minute, but she realizes that it's Jason.

As the gunfire out front of the Metro court continues:

Monica realizes that it's Alan who has collapsed in front of the building.

Lucky jumps out the 2nd story window to help Alan.

Inside, the goons are having a hard time restraining Emily. 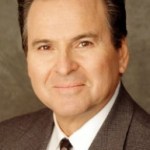 Emily Has To Play God.