Sonny and Carly ascertain the situation, Lorenzo needs emergency brain surgery and Scotty catches up with an old friend and her "no-good brother".

(We see the same opening swat team situation that we've seen all week, except through more dramatic footage. Faces of Sam, Nikolas, Patrick and Mac go from black and white to color; back and forth to slow motion, etc.)

The words "12 hours earlier" and "5 p.m." come up over a masked Mr. Craig and his goons as they take over the Metro Court lobby. He shouts to everyone that this is a robbery and it will be over in five minutes. Everyone but Sam freezes. She slips her hand to a button underneath the front desk, but Mr. Craig busts her and asks how badly she wants to be employee of the month. She doesn't. Mr. Craig tells everyone to hand over their cell phones, pda's and pagers. Then, his goons spray the windows black.

Since Lorenzo was having dizzy spells on his way to the fundraiser, he and Skye have driven to the hospital instead. Patrick tells him that he has a brain bleed and that his business meeting will have to wait. Skye is able to talk him into having tests and they talk as they wait for the results. She assures him that as soon as the business transaction is over, they will have a wonderful life together. Lorenzo gets a little weepy as he realizes how fortunate he is to have her in his life. They are kissing when Patrick comes in with results. He needs to operate right away because blood is leaking into his brain. He will have a grand mal seizure and die if he puts it off.

Luke has gone in to see Laura at Shady Brook. He tells her that he's having trouble adjusting to being without her again. Then he tells her not to worry; he'll manage. He's been thinking about what to do with the next 25 30 years of his life. Not sure if it'll be spent swimming the English Channel or running away with the circus, but one thing he figures will be the same he will always miss her. But, he should probably try to get on with his life. Just then, Lucky stops by to see his mother and is happy to see Luke.

Bobby stops by to see Jason on her way to the fundraiser. She's really worried about Carly and how vulnerable she's feeling toward Sonny. Jason assures her that he's taking Carly to get her divorce tonight. Bobby thinks the divorce is only a formality, she wants Sonny to back off and let Carly be happy with Jax. Jason wants to stay out of it. Bobbie suggests that Carly needs a reminder of what life with Sonny really was like.

Back at the hostage scene Maxi doesn't like the way the goons have ripped Liz's cell phone out of her hand. She tells them that they are risking the life of Lucky's baby. Then, she says they should rob them and get it over with. Mr. Craig decides that they should take a hostage to the vault. They choose Maxi. Then the goons take all jewelry from everyone including Sam's star necklace from Jason. Carly refuses to take off her engagement from Jax. She tells them to understand the significance of an engagement ring. They don't, so she hands it over. Turns out she was trying to engage them in conversation so she could hear his voice. Sonny doesn't recognize it, but he has a feeling it has something to do with Alcazar. Carly remembers that the voice sounds like a guy who was asking about the vault security. Sonny asks her if Alcazar put anything in the vault. Carly doesn't know, but tells him the manager might. To create a diversion, she marches over to Mr. Craig and tells him to take what he wants and get out. As she reaches to peel off his mask, he pushes a gun to her throat. While Carly is standing face-to-face to Mr. Craig, Sonny is able to go talk to the manager and learn that Alcazar put a silver briefcase in the vault. He signals to Sam to seal the vault, so she quickly pushes the button. As a result, inside the vault an alarm goes off and one of the two goons is able to slip out before the doors slam shut leaving Maxi and one goon inside.

Luke comes out in the hallway and embraces Lucky. Luke asks how the cowboy is, etc. Then he explains that he drove down to the Keys and did some diving. Then he bummed around Europe. All the places seem the same after a while, he says sadly. Lucky replies that he misses Laura too. They talk about the time they had with Laura in November and how much it meant to her. After Lucky leaves, Luke asks a nurse who sent Laura the daisies. "The man who calls to check on her," is the answer. Luke is trying to figure out who it is, and though various questions has ruled out both Nicolas and Lucky. When he hears that the guy has dirty blonde hair, Luke asks if he has "shifty blue eyes". When the nurse tells him that sounds about right, Luke realizes that Scotty is back in town.

Bobbie stops by Kelly's and is surprised to see Scotty there. They are happy to see each other, and she asks what he's doing back in town. She soon realizes that he's come back to learn more about Laura's recent "comeback". Scott grumbles that he heard that Bobbie's "good for nothing" brother married Laura again. Bobbie agrees to fill him in. LS49 is a one time thing, she explains, so they realized that they wouldn't have long with her. She explains how they all tried to protect Laura from the fact that she killed Rick Weber, but she figured it out for herself. Scottie wants to know what Laura was like when she was back. Bobbie gushed at how she was exactly the same as ever.

From the hospital, Patrick calls Robin's cell and explains that Alcazar is having a brain bleed and he won't be able to come by the Metro Court to talk to her as he had hoped. He tells her that he's sorry and he shouldn't have been so stubborn earlier He is scheduling another HIV test tonight.

Jason is going to the Metro Court and is able to notice that something doesn't seem right. He gets a glimpse through a crack in the painted windows and sees what's going on. When Mac, Lucky and the rest arrive, Jason fills them in on what he thinks is going on with the vault. Mac realizes that Robin's inside, Lucky realizes that Liz is inside. Jason calls Spinelli and tells him to bring his laptop.

Inside, the goon who escaped from the vault runs out to the lobby and explains that the vault slammed shut. Mr. Craig is furious. Carly informs them that the vault will not open under any circumstances for 12 hours. Sonny advises that they cut their losses and get out. He tells them that they can't possibly hold the cops off that long. Sonny offers to be their hostage and they can slip out the service door and through the docks. Mr. Craig thinks for a minute, and then hears Mac shout through a megaphone that the hotel is surrounded.

Outside, Mac tells his team that no one shoots unless ordered to. Luke arrives at the scene and tells Lucky that Lulu is in there. Lucky explains that so are Nikolas, Emily and Elizabeth. As Luke is looking on, he makes a funny face as if something really stinks nearby. Scotty has walked up behind him. When Luke turns around and realizes it's him, he says, "I don't want you bringin' Laura daisies or any other damn thing."

Sitting on the curb next to a snow pile, Jason is with Spinelli, who is working away on his computer. Finally, he is able to look at the list of the contents of the vault. He sees that Lorenzo put a briefcase in there...and the estimated value is.priceless.

At the hospital, Lorenzo has decided that he has to have the surgery, and Skye must take care of the delivery. He's starting to tremble as he gives her the instructions. If the code isn't reset every 24 hours, it will implodeShe is to reset the code in the morning before she meets Mr. CraigThen, she is to hand it to him in exchange for a check that she will wire transfer.the code is.7.6.7.before he can finish the code, Lorenzo goes into a grand mal seizure.

Inside the Metro Court, things are getting tense. Mr. Craig starts shooting up the place just to get their attention. He announces that "we have a long night ahead of us. I can't leave without that brief case and it's locked for 12 hours." He tells them that they have to play a little game called "Get to know you." They have to toss a pencil cup around and whoever has it has to say their name, along with an adjective to describe themselves. If they drop it, they will have the job of being the human shield when he leaves tomorrow. Carly catches it first and says she's "Kickass Carly." She tosses it to Max, who is "Menacing Max". After the cup goes to "Screw You LuLu" and "Nightmare Nikolas", it goes to "Baby's breath Elizabeth" and "Intern Emily". "Howlin' Alan, "Sweet Sam" and a guy in a tux calls himself "Ready Eddie". When it comes to one of the employees, he panics and can't think of anything. He thinks of a name just before Mr. Craig shoots him at close range. Finally, the cup lands in Sonny's hands --who delivers a deadly line."Michael. Corinthos. Junior."

Mr. Craig congratulates everyone for playing the game so nicely. He tells them that they are his guests for the night and they are to behave themselves, or die. Then, he shoots Robin. 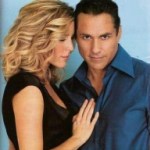 NEXT ON GH:
Mac is sending someone in.
Sonny says to shoot him, but Mr. Craig says it's "Lady's first."
Alan begs the goons to send Robin out for help.
Jason asks for Skye's help.

And So It Begins.

Mac Gets the Worst News.