And So It Begins.

Luke tells Tracy that he'd like to stay married, Sonny gives Carly her passport and Lulu asks Alan why he framed her mother.

Mac and a swat team have their weapons pointed at the Metro Court. They are concerned about the hostages inside and see that someone dressed in black with a black mask jumps from the 2nd floor. As they get ready to shoot the person takes off her black face mask it's Sam! The swat team puts down their guns as Sam runs toward them yelling that the building is going to explode. "Get everyone out, now!" she implores them. Patrick is one of the nervous faces in the crowd. An unconscious body is carried out and he runs to see if he can help. Nikolas is there, too. He yells out for Emily and decides to go in after her. The building explodes just before he gets to the door.

The words "13 hours earlier" and "4 p.m." come up over a scene of Sam wiping back the tears while she talks to Dr. Kelly about her inability to carry children. She tells Kelly that she doesn't think Jason would agree to go with a surrogate.

On the waterfront, Jason tells Liz that he doesn't want to put pressure on her like everyone else is. He reminds her that when she was first pregnant and they thought it could be his baby, he wanted to make a real family together. (This is his way of saying that a baby needs a family.) Liz and Jason talk for a while about the things that Lucky has done to lose Liz's trust. They eventually get to the subject of the night they spent together last summer. Liz asks him if he regrets it. "Sam and I have forgiven each other; but that doesn't mean I regret being with you, because I don't," he tells her. Liz replies that their night together is something she will never be sorry for. Jason recalls happy times from Liz and Lucky's history together and how close they've always been. Now that she's pregnant with his baby how can she turn her back on that kind of history, he wonders out loud.

Alexis goes to Sonny at work so they can talk about his testimony in Molly's custody hearing tomorrow. He promises not to lose his temper and will be a polite, charming witness. She jokes, "Wouldn't it be funny if the judge gave you custody?" Sonny says that he'd just turn her over to her mother. She knows that she faces a double-edged sword in court. She can't admit how badly the chemo makes her feel because she won't seem strong enough to care for her kids. But she needs to make a strong argument for how helpful marijuana is when it comes to dealing with the nausea of chemo.

At the hospital, Patrick argues with Robin about wanting to wait a while before he does his HIV test over. She wants him to know his status as soon as possible so that he can start proper medical care if he's positive. He tells her that he runs his life, not her. In that case, Robin lets him know that she won't stand by and watch him spit in the face of the medical progress that has occurred in the treatment of AIDS.

Monica, Edward, Tracy and Dillon are sitting around their study, grumbling as they wait for Alan to be read for the fundraiser. He finally shows up and they all bicker, as usual. Luke walks into the room and wishes them all a happy new year. Alice gives him a big hug and kiss. Tracy asks for a moment's privacy with her husband. After they all leave the room, she asks Luke who his first stop was, "Your real wife, or your imaginary wife?" He pours a drink. He tells her that he hasn't stopped by Shady Brook yet. He asks if she divorced him in absentia. She tells him that they're still married, but wonders why that is exactly. Why didn't he divorce her and marry Laura legally when he had the chance? "Because as much as I love her, I can't be with her," Luke replies. Before they could go further with their conversation, Lulu comes home.

"Hello offspring," Luke greets his daughter. Lulu seems surprised to see him, almost reluctant. Then a sense of relief washes over her face and she rushes into his hug. She reports that there Laura hasn't had any changes. Then she tells him about Spencer's kidnapping and Helena's role in it. Tracy suggests that Luke apologize to Lulu for disappearing. Lulu tells her dad that she understands why he had to leave, but she's glad he's back. She invites him to come along to the fundraiser; but he says he's not in the mood to face all of Port Chuckles just yet. Lulu leaves them to get herself ready. Then he finishes up with Tracy by saying, "I like being Mr. Tracy. This is the first time in my life that I'm with a woman who pushes me to edge and challenges me. I am your husband and it will remain that way until you decide otherwise." He walks out of the room and Tracy tries to choke back her relief.

Emily and Nicolas have gone to Shady Brook on their way to the fundraiser. He's explaining to his mother how full his heart is now that he has Spencer back. He also tells her that he and Emily are back together. He tells his mother that the only thing that's missing is her. (Outside Laura's door, Scotty Baldwin is waiting for his turn to visit.)

Ric and some cops storm into Sonny's lobby to search for marijuana. He has reason to believe that Sonny is Alexis's supplier. They all agree that Ric is nuts, but he persists. Alexis tells him that he wins she is smoking pot. She tells him to go ahead and give her a day in court to explain. Then she tells him if he would just drop the custody suit, he would be free to see Molly any time she wants. He tells her that he wishes he could ease her pain, but not at the expense of his daughter. She needs to live with her parent that can give her the better home. (As he speaks, he has a tear in his eye -- can it be that he truly believes this?)

To give Ric and Alexis some time to talk, Sonny and Jason have walked into the office. Jason tells Sonny to give Carly a divorce. He says that he has to live up to his word and asks for Carly's passport. 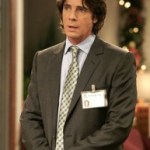 Noah finds Patrick at the hospital and notices his surly mood. Patrick tells his dad that his test came back inconclusive and that he doesn't want to know the results just yet. He explains that Robin broke up with him over it. Noah says that as Patrick's father, he doesn't want to hear the worst any more than Patrick does. But, as doctors, they know that inconclusive means "inconclusive". Noah reminds Patrick that when he insisted on giving part of his liver to him, it proved that he cared. Now Noah feels the same way. "I love you Patrick and so does Robin. The sooner you find out the better for all of us," he says.

After Nikolas and Emily leave Laura's room, Scott goes in. He announces to her that the bad penny has come back. He doesn't look at her right way, he rambles on about the daisies that he's brought -- the same kind she carried at their wedding all those years ago. He sits down next to her and finally looks her way. He's saddened to see her that way and apologizes for not being there when the "Big doin's" went down. He tells her, "Laura, I tried to protect you in my own way. That idiot Spencer stuck his nose into places where it didn't belong. But, I'm more mad at myself for not being here. I would give anything to go back in time." As he's talking to Laura, Luke has arrived outside her door, but before he can look in, Lainey calls him over to talk to her.

Luke tells Lainey that he's just spent a week in Paris with Laura's specialist. He's working on some new drugs and might be calling Shady Brook for information. Luke tells Lainey that it's nothing to get excited about, but to co operate if the doctor calls. (Scott has slipped out while Luke's back was turned.) Then, Luke goes in to see his angel.

Lorenzo is driving to the fundraiser with Skye. As he's talking, he tells her that his head is spinning.

At the Metro Court, people are starting to arrive. Bobbie is dressed and gorgeous and wonders why Carly isn't ready yet. They talk about Carly's feelings about Sonny and Jax and what she should do. Bobbie asks her if she really wants to divorce Sonny, or is she playing hard to get? Finally, Carly says something out loud that we've not heard her say yet. "If Sonny came to me from an honest place and said he wanted me back, I'd go."

Max is on security alert and stops Father Ruiz. He tells him that he knows he's not registered at the hotel, so why is he there so often? Next Liz arrives and when she takes off her coat, Sam stares at her pregnant belly. They bicker for a while as they normally do and Maxi's watches. Liz gets a call from Lucky who says that he's running a little late. Nicolas and Emily arrive and go hang out with Liz. Sam walks away and Maxi joins her and asks if she can help knock Liz down a peg.

Alan has arrived, too, and finds Robin. He sits with her and tries to explain Patrick's point-of-view. In fact, he reminds her that Patrick is doing exactly what she did years ago when Stone was dying she refused to take her HIV test. She'd forgotten! As they're talking, Alan notices that across the lobby Lulu is handing something to Spinalli. It's his PDA! He goes over to ask her why she stole it. Lulu answers a question with another question. "Why did you kill Rick Webber and frame my mother?"

Sonny comes rushing into the lobby and hands Carly her passport. He tells her that he's sorry he took advantage of her loyalty. He says that he would like to wish her happiness with Jax but he can't

Out front, Mr. Craig and a bunch of guys are all dressed in black, wearing black face masks and carrying briefcases. He gives them one order before they storm inside. "If anyone gets in the way, kill them." They rush into the Metro Court shooting their guns to get attention and announce that his is a robbery and it'll be over in 5 minutes if everyone just stays where they are.

NEXT ON GH:
Nikolas realizes that it's not a robbery.
Carly tries to pull the mask of off Mr. Craig and he jams a gun to her neck.
"The first loser of the night" gets shot!