Robin is caught in the crossfire, Jason has a setback, and Sonny makes plans for Jax. 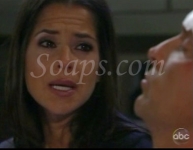 Outside Jason's hospital room, Patrick tells Sam his scans came back clean. However, they need to wait until he wakes up to give him a full examination. As Sam sits by Jason's side, he squeezes her hand and opens his eyes. Patrick examines Jason, who only wants to get to Carly and Josslyn. Patrick tells him he has to stay put. In the hallway, Sam tells Max to lie to Jason about what's been going on. Max goes in Jason's room and catches Jason up, but Jason knows he's keeping something from him. Max tells Jason that Jax grabbed Josslyn and Sonny is after him. Sam hits Max and tells Jason, who is trying to get out of bed, that if he leaves he will lose her. Jason settles back in bed and Sam throws Max out. Jason tells Sam he needs to check on Carly and Josslyn, but Sam becomes upset that he won't stay out of Carly's life. She reminds him they are planning a life together and it won't happen if he's not around to live it. She knows he needs to know they are okay though so she hands him his phone. 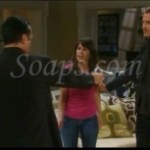 Jax and Sonny get into it about Brenda and how Sonny set Jax up with the drugs at Robin's house. Sonny pulls his gun and says he never should have let Jax live. Robin begs Sonny to put the gun away because her daughter is sleeping upstairs. Sonny is only focused on his hatred for Jax. When she tries to stop Sonny from shooting Jax, Robin is nicked with the bullet. Emma comes out and Robin urges Jax to go because Sonny won't shoot him in front of her daughter. After Jax has left, Patrick returns. He asks what's going on. Emma says, "Mommy got shot." Patrick tends to Robin and shouts at Sonny to get out of his house. When he does, Robin pleads with Patrick not to call the police. Patrick is enraged that a gun when off in his house where his daughter and wife are. Robin tries to justify everything, but eventually admits there's no way to excuse what Sonny did. Patrick says Sonny needs a keeper and it's not her.

Dante stops by Carly's to get help finding Jax and Sonny. She can't help him. He figured she'd say that so he put out an APB. Carly doesn’t want Jax arrested, but Dante tells her if he doesn’t find them first, there's no telling what Sonny will do. Carly tells him to back off and let her family handle this. Dante warns her to stay out of his way. Shawn assures Dante Carly won't interfere. After Dante leaves, Shawn tells Carly to be grateful she has her daughter back and to take everything else one day at a time. Carly worries about Jason, but Shawn suggests she focus on Josslyn for now. She tells him he's right and thanks him for being so good to her and Josslyn. Jax sneaks in the house and hears Shawn talk about the APB out on him. After Carly says she hopes Jax is smart enough to get out of town, Jax slips out. Carly gets a call from Jason. As they talk, Jason passes out and falls to the floor.

Back in his office, Sonny tells Max that he has arranged for Jax to have engine problems on his jet. He orders when Jax tries to get help, Max will grab him. He will then take him to the boat. They will sail off and Jax will fall overboard. After Max has left, Dante walks in and arrests his father.

At Crimson, Lulu continues to believe that Spinelli is staying in the Jackal P.I. character in order to get Maxie's attention. She also notes Maxie is jealous of his interest in her. Maxie declares she's happy with Matt. She just wants the Spinelli they all know and love back. When The Jackal comes on to Lulu, she reminds him of the past and tells him he once fell for her, but it was Georgie who loved him. He is clearly affected by the memory and recoils. Maxie thinks he's not Spinelli or even The Jackal P.I. right now. Maxie vows to find a way to bring him back.

Dante declares he's treating Sonny as a criminal from now on.

Life Without A Safety Net. 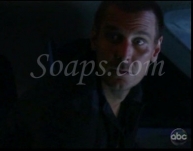