Brenda and Jax leave town, while Jason proposes to Sam.

At the house, Carly orders Brenda to make good on her promise to stand by Sonny for better or worse. Brenda responds that she hates her. Carly leaves, as Brenda begs Sonny to say he's sorry and to admit he made a mistake. Sonny wonders if that would be enough for her to take him back and move to California with him. She wonders if he means it. She says it would be perfect, but Sonny knows it would be a lie because his power base is in Port Charles. It scares him how much he wants power. She wonders if he wants it more than love. He responds that love doesn't last – it gets taken away, dies or walks away when there's too much pain. Power is something he understands and can hold on to. He won't give that up for anybody. Brenda notes, "Not even me." Sonny doesn't think he can love her the way she wants. Brenda wants him to be the man she has carried in her heart her whole life. Sonny tells her that man never existed. He was a part he played so he could have her. He's sorry for that. Through tears she tells him she's glad this is who he really is so she can leave and protect her son. As she gives him her rings back, he tells her to find a man who can give her what she needs. But no matter where she is, he will always love her. Brenda starts to sob and walks out. Sonny sits in his chair and cries. Carly returns and Sonny explains that Brenda loved him in a way that she wanted him to be, but once they got married she saw things she didn’t see before. Carly thinks it sounds hypocritical, but Sonny knows she did what she felt was right. Carly is sorry to see Sonny like this. He says he will always love Brenda, but he will never regret helping Carly get Josslyn back.

Jax drops by the house on his way out of town to say goodbye to Josslyn. He talks with Morgan and tells him he enjoyed watching him grow up and being a part of his life. He tells his stepson he will miss him and Morgan tears up as he says the same. Michael brings Josslyn out and Jax says goodbye to his daughter and asks the boys to look out for Joss and Carly. Once Jax is gone, Carly returns home and learns that Jax left. She loves Jax and hates how things turned out, but as long as she has her kids she can handle anything. 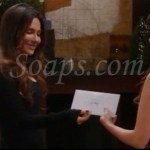 Robin sits with Brenda as she packs in her hotel room. They friends hug goodbye and Brenda asks Robin to give Sonny a letter. After Robin leaves, Jax drops in to say goodbye to Brenda. She tells him she's leaving town as well. Jax can't believe she left Sonny, but he's happy for her. He asks if he can help with her travel arrangements.

Brenda and Alec join Jax on his jet to Rome. Jax tells Brenda to throw a coin in the fountain for him. She suggests he stay long enough to do it himself.

Sonny makes a call and learns that Brenda left with Jax on his plane. He angrily instructs the person to get his plane ready because he's leaving.

Alexis tells Sam at the lake house that despite her misgivings about Jason's line of work, she knows there is no life without risks. Sam feels emotionally safe with Jason because he is loyal and accepts her for who she is. Alexis admits she is a little envious and gives Sam her blessing. Kristina walks in and squeals in delight over the news.

Sam meets Jason on the rooftop. Jason says he learned from Jake's death not to take time or love for granted again. He takes her hands and says he loves her and would be honored to spend the rest of his life with her. He asks her to marry him. Sam never understood the meaning of the word love until she met him, but she doesn't need to be married. She is already happy because he lets her know she matters in a million different little ways. She doesn’t care about anything but being with him. He assures her she has him for the rest of his life, but if it's okay with her, he'd still like to get married. She tells him she will absolutely marry him. He kisses her and then tells her about the ring Maxie lost. He says he found a substitute, which isn't a very good one. He pulls out a lug nut, or a washer, or something like that, and she asks him to put it on her finger. He assures her it's just until they pick out the ring she wants. Sam already has everything she wants.

Lulu and Dante get sidetracked on their way home.

Lucky is assigned a new case.

Anthony shows up at ELQ with flowers for Abby.

Nothing Left To Lose.