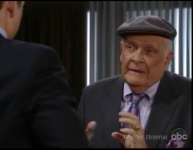 Michael and Abby meet Edward in Michael's new office for their first day of work. Michael reminds Edward he's supposed to be starting in an entry level position, but Edward counters that he's family. Asher enters to show Michael the ropes and Abby is assigned to assist both men. Asher says he is excited to work with both of them. Edward asks him to get everyone some coffee and Asher's face hardens a bit. Alone in his new office, Michael seems a little bored. Abby enters and excitedly tells him about her day getting acquainted with the place. Michael is happy to see her so happy. She knows he will find something he enjoys working on too. Edward listens in and smiles. Later, Michael overhears Asher sharing his concerns with Abby about Michael's lack of enthusiasm. Michael looks concerned as Asher starts talking up his Harvard background and Martha Vineyard summers.

Carly enters Sonny's office to discuss Michael working for Edward. Sonny agrees with Jason that they can't push him one way or the other, but Carly worries Edward will inflict serious emotional damage. She worries she will lose Michael to Edward and Josslyn to Jax. Sonny tells her not to worry. He'll take care of Jax. Carly wants Jax to be part of her daughter's life so she doesn't want him hurt or killed. Sonny says it will be okay as long as Jax plays fair.

Jax stops by the house to tell Brenda she is on the list of witnesses and will need to schedule a deposition. Brenda doesn’t want to get involved and won't testify against Sonny. She's sorry for everything he's going through, but she won't sacrifice her marriage to help him. Jax states her name will remain on the witness list, but she declares she won't say the things he wants her to say. Once Jax is gone, Brenda makes a call to a lawyer. Sonny walks in and she hangs up. Sonny asks Brenda to talk to Edward about backing off Michael and then sees her subpoena for Jax and Carly's hearing.

Jax drops in on Carly at home to tell her Michael and Morgan are on his witness list. Carly is furious he would do that to Morgan. She doesn't want him to have to choose between Jax and Sonny and begs her ex to not put him on the stand. Jax blames it on her because she won't admit her kids aren't safe with her. Carly warns him he is about to push her way too far.

Nikolas cancels his meetings at Wyndemere because he is going to Zurich with the boys. Lucky shows up to talk about Aiden, but Nikolas doesn’t have time. Lucky reminds Nik that Aiden is his son and they need to discuss how the transition will work. Nikolas remains adamant that Aiden is his boy and declares that his lawyers have already confirmed that Lucky doesn’t have a legal leg to stand on. Lucky points out they have a bond that can't be broken because they are brothers. Nikolas agrees. He loves him and always will, but he can't give him what he wants.

Elizabeth tells Steve, Robin and Patrick at the hospital that she is taking some time off. She informs them that Lucky is Aiden's father and she needs to deal with some things. After she leaves, Steve thanks the Drakes for being so supportive of his sister. He then gives them Siobhan's file and asks them to head up the investigation into the error that occurred during her surgery. Olivia steps off the elevator after Robin and Patrick have walked away. Steve tells her how scared he is that Elizabeth made a huge mistake. Later, Robin and Patrick learn that Matt isn't at fault regarding Siobhan's surgery.

Lucky visits Elizabeth at the house and relays how weird Nikolas was. He realizes Nik might be leaving town with Aiden.

Lucky and Liz race over to Wyndemere. Elizabeth panics when they discover everything has been cleared out. Lucky informs her Nik's jet is also fueled and ready to go, but calmly suggests they go home to regroup.

Nikolas stops by Emily's grave with some flowers. He tells her he's leaving the country for good and taking Aiden with him. He won't let him be a pawn in a long drawn out custody battle. He misses Em so much. He wishes she were there to tell him the right thing to do. He pleads with her to help him.

Elizabeth and Lucky return home to find Nikolas sitting with Aiden on the couch. He admits he was about to leave the country, but realized it wouldn't be fair to anyone, especially the little boy.

Lucky gets a surprise.

Maxie is concerned about Spinelli.

Take Care Of Yourself.